Memorable Tales from the Parish, Part 3 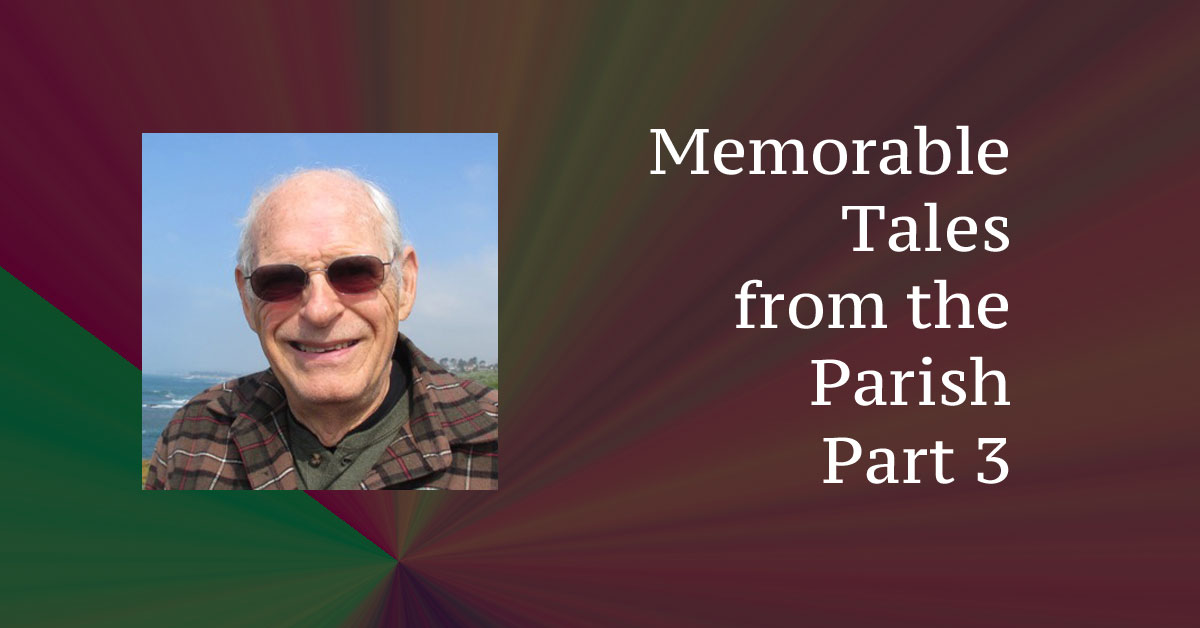 Here is another memorable moment from from my parish ministry. See part 1 here, and part 2 here.

The Final Journey in a Country Parish

I was asked to officiate at the funeral service for a man who was not a member of the parish, nor had I met him. The funeral home, located in in a small town, in addition to serving as a mortuary, was home to the mortician and his family.

Jonas Schmidt, a farmer born in the rural area of a rural county, died at age 91. His family told me he had never left the county where he was born.

Comparing a small town funeral director to the super-smooth salesmen of the sophisticated city funeral home is like comparing a used lawnmower peddler to a BMW salesman. Conversation with the rural-based mortician is a “down home” experience.

Prior to the 2 PM service, the director and I walked to a couch, located in the porch area, and sat down to await those who would arrive to show their support to the Schmidt family. When people arrived, they were directed to one of two rooms. Upon walking up the steps to the porch, the mourners were confronted by a narrow hallway. On each side of the hall was a room, entered through an ordinary door. Absent a funeral service, one room no doubt served the family as a sitting room; the other was the parlor. Old wooden folding chairs had been set up in each. In one room was the casket and flowers. In the other, a grandfather clock that bonged out the quarter-hour, half-hour, and hour. There was no music, no sound, except in the one room the ticking of the clock, and in both, the creaking of the well-worn wooden floors as people moved about.

The director and I remained on the couch as the procession of people passed by. I whispered to the director a couple of questions. He replied in a voice he would use had I been on the other side of a stadium and everyone, from the railroad track running in front of the home, to the guests in the furthest back-part of the room, could have heard his side of our conversation. Every once in a while, one of the people craned a neck around the corner to see what we were doing. I caught the curious person’s eye, and the head snapped back to its straight-ahead position.

At the end of the hallway, opposite to where we sat and where I would stand, was the telephone, the kind that had an earpiece that fit into and swooped down from a U-shaped gadget on the side of the telephone box. When the phone rang, one lifted the earpiece to the ear and spoke into the mouthpiece on the front of the wooden phone case. When the phone rang–and ring it did–it could have well served as a fire gong. Its clangs aroused Mr. Funeral Director. He clopped down the hall, and we all heard one side of the conversation. Twice more the phone clanged away, and all of us listened in.

After the third phone call, the mortician announced that as soon as the clock struck the hour, we could begin. “No use to start ‘til it strikes,” he, from experience, noted. “You’ll just get started and it will go off and interrupt.” Mentally, I pictured the gathered multitude nodding agreement. The clock did its thing. Mr. Director stood up, and, from a hidden corner, brought out a brass pulpit, which he placed in the center of the hallway, midway between the two doors which entered into the two rooms, one on each side of the hall.

I stepped up to the pulpit and noticed the phone, now dangling by its curly cord. I had wondered what to do if the alarm went off during the service. The director had taken care of that by letting it dangle by its cord. I looked to one room, then the other. The middle five or six rows of each room were visible. The front and back rows in both rooms were hidden by the doorjambs. I searched in vain for the immediate family. The casket and flowers were likewise hidden. I talked to the doorjambs and the phone with a dangling earpiece that hung at the end of a short hall. My talk lasted 18 minutes.

When I concluded my segment of the service, I stepped back to the porch area Where else to go? Mr. Director came and faced the hallway. “This concludes the service. If you want to see the remains, you may come in this room.” He motioned to the room on the right, containing the one departed. “If not, you may go to your cars out this door.” He pointed toward the way they had come in. Most took the last option.

One of the relatives stopped at the casket, which I had maneuvered over to see. The casket was open, full-length, a cover pulled up to the deceased’s chin. Prior to the relatives’ stopping by, the cover had been up to the waist. Someone, after the service concluded, had pulled the cover up to the chin.

The 1960s vintage hearse was parked in front of the mortuary, in the mud. Prior to the service, Charlie, the director’s helper, had placed an opened refrigerator box at the back of the hearse. At least twice it was necessary for Charlie to announce to Mr. Director that the cardboard had blown away. Charlie, each time, stomped out to put the wayward box again at the back of the hearse. It came time for the cardboard to fulfill its purpose. Six men carried the casket. They each stepped over the gutter mud and onto the outstretched refrigerator box. The cargo was placed safely on board.

We drove to the cemetery located next to the United Brethren church. The pallbearers went into action. The casket was drawn out of the hearse and I, along with the pallbearers, began the walk to the opened grave. No dirt was in evidence. I pondered where the grave diggers had hidden it.

One of the grave-diggers sauntered our direction, leaned toward the director, and whispered, “’Tis things went and caved in. Tell them [the pallbearers] not to step on that end,” [he motioned to the foot-end of the grave.] “There’s a big hole and they’d fall plumb to the bottom.”

The director nodded (I almost wrote “gravely nodded” but wouldn’t do that), turned to the pallbearers, and, in a voice second only to Gabriel’s horn, which will be calculated to open the spot we stood upon said, “Watch it, men. There’s a big hole there. Better stay on these here boards. The thing’s caved in.” The men heeded the warning and all went well.

In short order the deceased, and his containment box, were placed in the earth. The director climbed into the hearse and returned to his home, there to await a call that will roust the old phone on the wall. I did not stay by to witness how grave diggers manage a collapsed grave site.