Memorable Tales from the Parish, Part 2 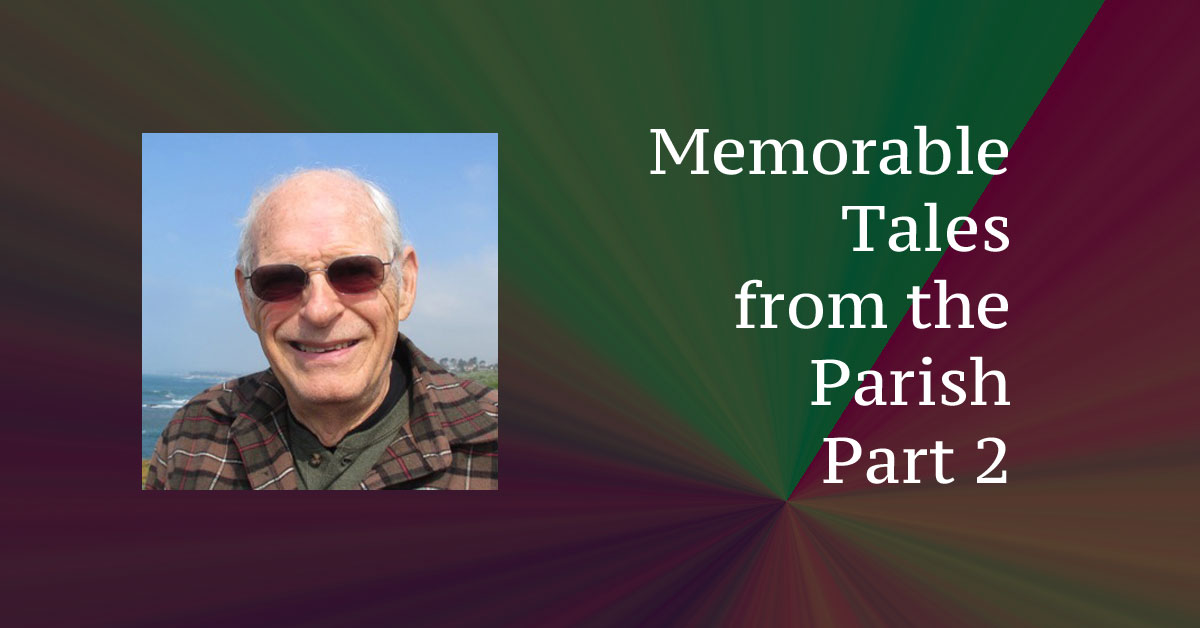 Here is another memorable moment from from my parish ministry. See part 1 here.

A Case of the Errant Vapors

If you have not personally experienced the vapors, you perhaps cannot appreciate Fred’s predicament. If you have, you will identify with his dilemma.

Several weeks had passed since I’d seen Fred around town or at church and I wanted to check to see that all was going well with him and his wife. I could not call; the family had no telephone, so I drove out to see him.

Fred’s house had once been a chicken coop. The sign that identified where he lived read: DIRT 25 CENTS A TON  SQUABS FOR SALE.

When I arrived at Fred’s house, I parked the car, walked to his door, and knocked. Fred answered the door and invited me in. I took an offered chair and glanced about the room. Fred’s wife had done a fine work in her attempt to transform the once-chicken coop into a livable home. I noted the lace curtains on the window, several throw rugs on the floor, and a well-kept living room that was spotlessly clean.

I asked Fred how he had been. My question provided the opening he needed to introduce me to one of the more remarkable conversations I’ve had.

This thunderbolt flummoxed me.

“The vapors?” I asked. I didn’t know what else to say.

“You know the vapors, don’t you?” Fred asked, looking at me with his sad eyes.

I had to confess I did not. In this matter I had no more understanding than a child has of quantum mechanics.

With a tone of resignation he accepted the challenge to enlighten his ill-informed pastor.

“Well, you see,” he said, “it’s like this. The vapors is kind of like a fluid that rolls and swirls round and round inside you. (His arms made propeller motions that conveyed how vapors operate.) They may pass into your chest or back.”

I became thoroughly engrossed by this insight into medical knowledge. The pity I began to feel toward this man and his predicament I cannot describe.

“This sounds serious, Fred. Have you seen a doctor?”

In his most somber tone he said, “I’ve been to every choiropractor (sic) and doctor in the county, almost. They can’t trace this thing at all. They try and just give up.”

I can only attempt to construct the frustration this revelation brought. I guess we’ve all felt it, to one degree or another, when confronted with an inept medical establishment.

Fred then ventured deeper into mysterious territory. He was, he explained, at the end of his rope. No surprise here. The river of foul humor cascading round his anatomy brought forth one distraction after another. The indescribable vapors, as he called them, could match and defeat the astuteness of even the most magic of medicines.

Fred reported one of his last visits to his physician. “I have been coming to you now for six weeks and you have done nothing. The vapors are still there and you have all my money. What I need is an ENT man.” He caught me there. I was astounded he knew about ENT men.

“What did your doctor say?” I asked.

“He said he did not agree. He asked me what an ENT man could do.”

Fred was persistent. The hapless medic’s patience was no doubt tested to its full. “The doctor told me,” said Fred, “that what I really needed was a psychiatrist.”

Fred was not distressed in any way by this revelation. He had a ready response: “I went to one of those guys when I was in the army,” he replied to the doc. “They didn’t do a thing. I need to see an ENT man.”

This last statement must have brought the unfortunate healer even closer to the end of his tether, or he may have had it in for the local ENT specialist. It’s all speculation. The end of it was that the doctor made the referral. Fred went to see the ENT man.

“Well, yes, he did help,” replied Fred in his slow drawl. “He sprayed some stuff up my nose and that’s the problem.”

“Yes. The stuff the ENT man sprayed up my nose opened up the back of my nose. Now it is opened and the flow of air is clear. But when he blew that stuff up my head and opened the back, it was now free to run down into my back and ever since I’ve had the lumbago. That stuff all ran down my back, you know the lower back, and I’ve pained ever since. I’m never going back to that guy again. Sure he opened the back of my head, but I’m worse off than I was. Now the vapors boil all through my body. I can’t sleep at night, unless I take this nerve pill that the doctor gave me. I’m not doped. I just take two or three when the vapors get goin’ too fast and I can’t sleep.”

So there you are. You blow your head and get lumbago. Seems a man can’t win. Which shows that modern medicine still is no match for even the commonest of ailments.

I was touched. “So, Fred, only drugs give you relief?”

There he had his answer, and he took full advantage. His wife told me he hadn’t turned a lick of work since he made this astounding discovery. He had his cure and he was going to hang on to it for all he was worth. His commitment to not work has held, as far as I know, to this day.

Lawrence (Larry) Downing, D.Min., is retired after more than 40 years as a parish minister serving Seventh-day Adventist churches on both coasts.  He was also an adjunct faculty in the School of Business and the School of Theology at La Sierra University.  He is married to Arleen.  Together, they have three grown children and six grandchildren.  Larry and Arleen reside part time in Rancho Cordova, CA and in San Luis Obispo, CA.