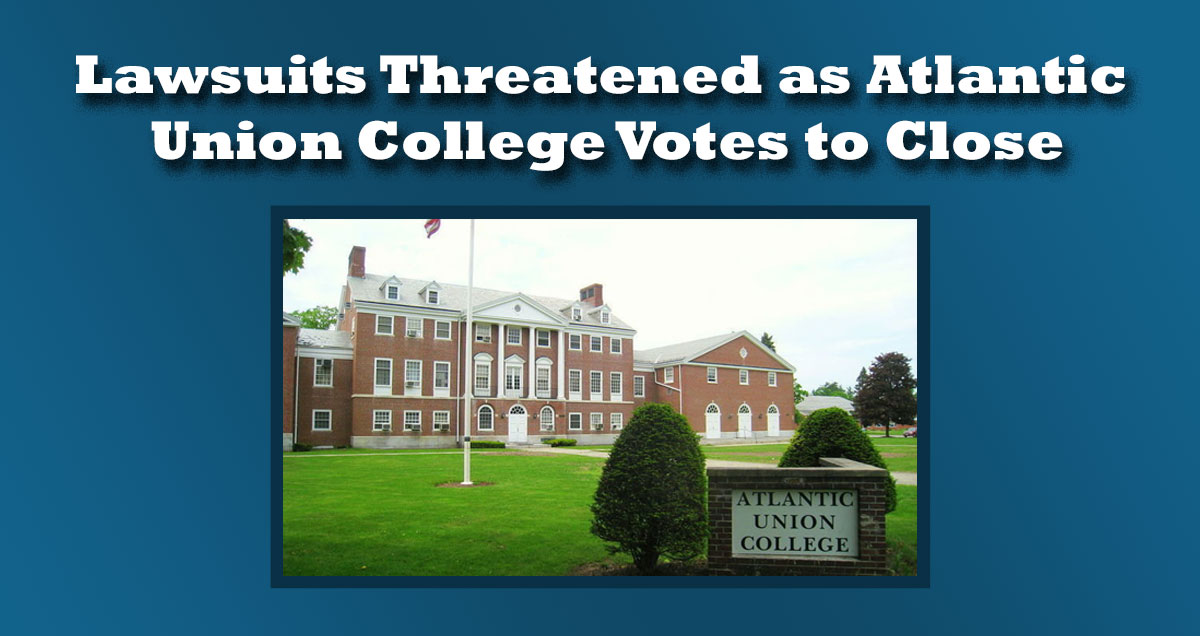 A press release has announced the closing of Atlantic Union College,  bringing to an end the last struggling gasps of a tiny and unaccredited college program that had never really recovered since AUC lost its accreditation in 2011. According to the press release:

The votes were taken following receipt of an interim report from the Independent Task Force which was commissioned in 2017 by the Atlantic Union Conference Executive Committee to conduct a feasibility study of the college. The results of the feasibility study led to the conclusion that Atlantic Union College should suspend the baccalaureate program at the end of the current academic semester and phase out the certificate programs in a teach-out manner no later than December 2018.

The school has had only approximately 50 students, about half of whom are in “certificate” programs. It had been heavily supported by constituent conferences of the Atlantic Union. In April of 2017 the Southern New England Conference voted to discontinue funding to the school. More recently Greater New York Conference and the Bermuda Conference also reduced or ended funding for AUC. The small, unaccredited program was draining $4.3 million every year in constituent conference subsidies, a situation which one member of the independent task force called a “stewardship crime.” He pointed out that hundreds of Atlantic Union students could have had their full educations paid in full at Adventist colleges in other unions, rather than continuing what most people knew was a program with no future. The Massachusetts Board of Higher Education had also threatened to withdraw its permission for AUC to continue a baccalaureate program.

AUC students have been complaining in online petitions that their education wasn’t what they’d been promised. In August of 2017 a change.org petition by a student alleged that they’d been “scammed” by AUC. This petition has since been removed.

A new change.org petition, posted on Monday 19 February, demands that AUC “Apologize and Give Back Our Money!!!” The latest petition says that following the previous effort, “they treated the student who made the petition as if she was the devil and lied that the petition was 100% false to their students as if everyone of us are idiots.”

The petition says that students have been lied to: “population lies, shuttle service lies, accreditation lies, claiming students can get credits from their certificate programs and many more issues and lies that plagued the institution.”

The most serious charge, according to the petitioners, is that AUC promised that students were earning genuine college credits that would be accepted at Andrews University. “News is spreading that former students have talked to Andrews University articulation team and word is spreading that it turns of there is no ‘full transfer’ of all AUC credits to Andrews as AUC is claiming.”

The petition goes on to threaten a lawsuit if the college doesn’t respond to students who feel deceived.

We are giving Atlantic Union College and Atlantic Union Conference two weeks to publicly apologize for all the scam, lies and deceit. Or point by point prove how every last detail of this and the last petition written was wrong. If they can’t they will prove not only to the world that they really are a scam but that they are evil and care only about themselves. Next they have an additional four weeks after that to come up with a plan to pay back the full price it cost to attend AUC to every student who attended the school based on how long they were there, clear all debt of students, sponsor students to get free education at any Adventist school not just up to their bachelors but up until they are finished their masters degree (the least you can do after scamming us so hard), and pay back the money for any education that students who already left may have already payed for. If they don’t do this we will start the process of joining together as much students as possible for a joint lawsuit which could result in the Union potentially losing millions, and definitely lose probably double or triple the money they would lose verses just following this petition.

It is not clear how the planned closure of the college will affect any possible resolution to these student complaints.