UNDENIABLE– How Biology Confirms Our Intuition That Life Is Designed
Douglas Axe, 299 pages by HarperOne, 2016. (Hardcover $25.99, less on Amazon.com)

The slipcover to the book is a close-up photograph of 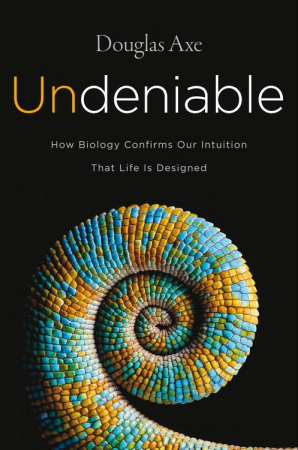 the fantastically colored, intricately designed, mosaic-like art of a chameleon’s tail. Every little scale in turquoise, green, orange, yellow and blue is a perfect spiral of fantastic artistic design. But it is an animal, not an art gallery, and it has a ten-inch-long tongue with a unique mechanism for sticking to the hapless fly foolish enough to mistake art for predator.

Molecular biologist with his Ph.D. from Caltech and published postdoctoral research from the University of Cambridge, Douglas D. Axe has written a book called Undeniable to support the untutored impression that the chameleon, as it appears at first, is indeed a work of art. Or artistry. Or design.

The fact that biology remains firmly in the grip of a materialistic dogma that reduces the chameleon to a series of unplanned coincidences magically transformed into this beautiful piece of living art with a fantastic tongue is the topic of his book. And the devotion of scientists to the unproven ability of some form of natural selection to do what we now clearly know it cannot do, is his target.

His science is clear enough. He has proved in published peer-reviewed scientific research that mutations or changes in functional enzymes by accidental processes or laboratory design almost never created new functional proteins capable of evolving new functions for cells or the creatures made of cells.

But the fact that his science shows Darwinian evolution by natural selection impossible has not removed the materialistic attempts to explain life. Darwinians still hold with fundamentalist fervor to the hope that the designed and purposeful world we live in is one big series of unplanned accidents. Axe’s published work has shown that given the age of the universe and the number of changes needed to change even one simple enzyme into a better one, much less the myriad of changes needed for Darwinian suppositions to change a sponge into a dolphin, evolution of the chameleon by natural selection is not a realistic possibility.

Yet any scientific publishing that slips and mentions “design” or a “creator” is immediately censored by the Darwinian Taliban. Mentioning God or an Intelligent Designer as a possible explanation of the obvious design in every living cell of every living creature is damned as religion and out of place in a scientific journal. Instead of answering the science of ID with better science, the whole project is dismissed instead of reasoned with. Words such as “myth,” an “attack on biology,” an “intellectual virus,” an “insidious movement,” something that is “a retreat to the dark ages,” “terrifying” and “like Frankenstein’s monster” are used in otherwise scholarly pages discussing the dreaded Intelligent Design movement.

This brings to mind the bombast of a Trump rather than the supposed cool and thoughtful search for truth scientists like to drape themselves with!

Dr. Axe suggests that since technical arguments have not convinced many scientists to re-evaluate their dedication to materialism that he wants to offer “nontechnical arguments” to support the validity of the design inference most humans have when first looking at the world we live in.

But I have to admit that even as a physician I bogged down in some of his “common science” explanations. Some were as easy as “alphabet soup” while others required perhaps a little more of a mindset of a Caltech/Cambridge molecular biologist to fully comprehend. But the conclusions of his arguments are very clear and very easy to understand. And many people in the Amazon.com reviews praise the book for its understandability.

“Darwin’s idea that life wanders from one variation to the next, never committing, always yielding to the blind force of natural selection…” is plainly incompatible with the facts of the exquisitely designed and optimized life forms we find all around us.

Natural “selection can only home in on the fitness signal from an invention after that invention already exists; it can’t actually invent.” Or as was first said over 100 years ago, “Natural Selection describes the survival of the fittest but not the arrival of the fittest.”

“Tasks that we could need knowledge to accomplish can be accomplished only by someone who has that knowledge.” Biology shows more and more that living things are a complex, not simple, combination of parts – each necessary to support the whole. He calls this “Functional Coherence,” which he explains as the necessary coordination of different parts, each essential to get a complex job in nature done.

This book is not a theology; it is a support for the science that points to design. So while Axe acknowledges “birth defects, cancer, infectious diseases, parasites, suffering…” as realities, he explains, “I’m not denying that the present state of life is troubling in many respects. Rather, I’m affirming that something spectacularly good is clearly discernible even through the haze of trouble.”  And that spectacular good is that the nearly perfect “physical forms of life are expressions of something deeper, something immovable, something perfect.” And he does not hesitate to call it God.

He is not satisfied with an impersonal “nature” or unseen “laws” behind the design in life, because of the fact that humans are persons. We have an inner consciousness where we are in our bodies but observing them. “…the overwhelming richness displayed to us by the outside world is complemented by an equally rich inner experience…” “We are persons, dwellers in the richest of all worlds, and this rich world of personhood we each inhabit had to come from a Source…” “Our own thinking can’t possibly be reduced to any physical process because it collapses the moment we suppose otherwise.”

That is, if thought is merely chemistry in the brain, and completely material, then you have no reason to trust that thought as any form of “true.” Materialism destroys the validity of the thoughts it claims to explain!  He says children who enter the world universally know things were made for a purpose. He quotes evidence that “by elementary-school age, children start to invoke an ultimate God-like designer to explain the complexity of the world around them—even children brought up as atheists.”

“Of the millions of species participating in this remarkable adventure called life, only ours has been given the ability to grasp this most crucial truth. We can and we do, from an early age.” “The source from which everything else came is not a what but a who.”

He ends with a vision of a new biology where research scientists are free to openly study life “as something clearly and cleverly designed.” “That the deepest questions in biology have not yet been answered means they are still asking to be answered. Anyone who cares to examine the facts carefully will see that the old answers were wrong… Having learned much since Darwin’s day, we have every reason for optimism this time. Speaking as a scientist, I can’t think of a more attractive message to convey to young people of technical ability.” 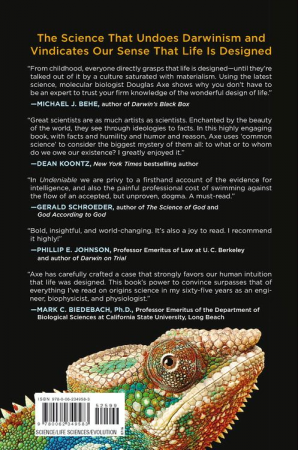 How young Adventists “of technical ability” will be able to freely and openly study this clearly and cleverly designed creation, free of not only the dogma of fundamentalist materialism but also free of the fundamentalist quasi-doctrine of young-earth creationism remains to be seen.

Adventist theologians and scientists who have embraced some version of Darwinian Evolution as the “scientifically proven option” need to more critically review the evidence that suggests the insufficiency of random mutations and natural selection as the main engine for diversity.

Championing doctrinaire scientific naturalism as the only way to do “true science” may be an unnecessary, artificial, and restrictive position for a Christian scientist to maintain. Scientists can study what God did and how, just as rigorously as the atheist, without blinding themselves to the many evidences of purpose and design their science reveals.

Science may overwhelm our insufficient 19th-century short-chronology of creation, but free and open science strongly supports our essential doctrine of a free and open Creator and the weekly Sabbath that memorializes his genius and his intelligently designed plans for each of us, chameleons and all.

(Your constructive comments after you read this book are welcome.
But please refrain from criticizing the book by its cover
or my brief review until you’ve invested in reading the book yourself.
It is available in Kindle as well as for purchase on line.)