Conversation with the Adventist Parents of an Olympic Star 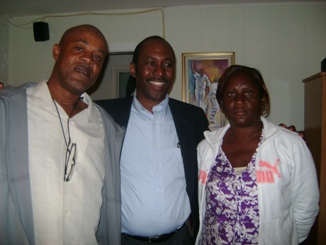 By Chris Daley, August 21, 2016:    Each year in Washington DC there is a celebration of the achievements of folks of Caribbean heritage who are contributing to the richness of American life. An awards ceremony is organized by the Institute of Caribbean Studies and in November 2009, Usain Bolt was honored with the Vanguard Award for his  phenomenal accomplishments in sports.

Usain was in Mexico for an event with the International Olympic Committee, so he was represented by Mom and Dad Bolt, as well as Norman Peart, his manager. I was privileged to spend a few hours in an intimate gathering with some track and field die-hard fans to relive Usain Bolt’s major achievements over the years. To sweeten the experience, the guests of honor were the Bolts and Peart.

The atmosphere was filled with joyful anticipation.   The closest event I could think of to give you a sense of the mood of the occasion was meeting with Mary and Joseph after Jesus had fed the 5,000.  Even so, there was no trumpet blare when they arrived. If it was not for how much the Olympic star resembles his dad, I would have missed their entrance.

Wellesley and Jennifer Bolt are graciously humble folks who are still trying to put context to the Cinderella-like  life they have experienced since their famous son bolted unto the world scene.  His dad shared that he still pinches himself when he is settling in some swank hotel in his many travels.  They are pretty determined to stay grounded and remain contented in the district of Sherwood Content, Trelawny. He runs a small market but the increased travel disrupts the store’s  routine.

Our kind host set the mood for a great afternoon. The food was delicious and the conversation was easy with these charming folks.

Both parents were athletes, thus explaining the multiplying DNA  effect. They shared his nickname, VJ, which he only answers to when used by those he knows. His dad find himself calling his son “Bolt” as others usually address him.

His mom remembers the determined toddler of two wanting to go to school. She agreed and he was off and running. At age five his marvelous speed was discovered. They remember his only loss, his first visit to the national championship. It was a case of a country boy going to town, and getting used to the logistics of the bewildering event. He vowed that would never happen again, and so we have witnessed.

His folks were comfortable enough to share about his religious faith.  His mom is a devout Seventh-day Adventist, but Usain had to make a decision about his athletics future given that most competitions are on Saturday.

His coach continues to support his faith development in the Baptist tradition. Along with this issue, the lure of females was a major concern for mom. Mom remembers being in Florida when a car accident occurred in April 2008. Her heart was only comforted knowing that dad was there to take care of business. Dad continues to have significant influence in guiding their famous son.

Our host then fired up the multi-media system taking us back to 2007 where his world coming out occurred. The crescendo of stomping, screaming and singing of the national anthem from the tape filled that living room. It was great getting the color commentary of the Bolts as they retold the details surrounding each event. The recordings were replayed repeatedly to squeeze every sentiment out of each event.

When asked which was their most memorable event, they shared in synchronicity the 200 meters race at the 2008 Olympics. Mom was confident that he would break the world record, while dad had his reservations given that he had just recently  been depleted by the emotions of an historic 100 meter record.

Let us remember this fine family in our prayers that they will have the sustaining energy to support their famous son, especially as he experiences such great fame. They are part of our Adventist family of faith.

Chris Daley is a board member for the Adventist Today Foundation, an elder at Sligo Church on the campus of Washington Adventist University in Takoma Park, Maryland and a research professional in information technology at the United States Patent Office. The featured photo with this article is Wellesley and Jennifer Bolt with Chris Daley between them.