As I said yesterday, a church business meeting like this one (and indeed, all the church governance meetings I’ve ever attended) isn’t just about decision-making. Yet this one, more than most, is about pageant, as much as about seeking collective wisdom. I hope you’ll forgive me for not reporting on every item, such as the 100th anniversary of the Family Ministries department, the retirement of some key long-time workers, and the excellent “every child in school” initiative from ADRA. All good stuff, which you can read about on our Twitter feed.

The mass of free printed, promotional and AV materials handed out today makes me think again that there needs to be some way of holding departments accountable for the materials they create. Right now it seems like from an administrative office in this denomination you can just create anything you want, whether there’s a proven need for it or not. A lot of this material ends up on shelves or in dumpsters. Can we think about the creation of “resources” based upon demand rather than the ability to create an endless supply?

I missed telling you about a couple of important things yesterday.

One was the acceptance of a statement on our belief in the Bible. You can read it and analyze it for yourself here. It appears to be an acceptable statement, but to me the most significant thing is that it passed with virtually no discussion. How important are such statements, if there is so little meaningful interaction with them?

The other thing I didn’t mention is my appreciation to Elder Wilson for making a point of emphasizing that the GC is taking very seriously the prevention of sexual abuse. He’s asking every Division to study and bring a plan on how to prevent this problem. Thanks, Elder Wilson.

Vicki Griffin, Director of the Lifestyle Matters of the Michigan Conference, gave today’s devotional, about good diet and the body-brain connection. Vicki is an effective and enthusiastic speaker. Like Dr. Nedley, she selects from modern health studies quotes and assertions that demonstrate Ellen White’s accuracy about maintaining good health and a clear mind. You can listen to it here.

Nothing is quite as hard to follow as General Conference (GC) treasury reports. I asked the guy next to me, “What was the essential takeaway from Juan Prestol’s report?” He said, “Things are reasonably stable, and we’re doing pretty good, but not quite as good as last year.” Elder Prestol said that working capital is 84%, liquidity 102%—again, about the same as last year. I was interested to hear him say that the church doesn’t invest in the stock market at all.

By the way, last year’s tithe was the highest on record. If I remember correctly, it was $1.4 billion from the world, and another $1.2 billion from the North American Division (NAD). That’s extraordinary.

He added that the purpose of the GC treasury is not to hoard or accumulate funds. And, he added, anticipating the afternoon’s discussion, “We’ll be diminishing the footprint of this institution.” I also appreciated his saying that “The people’s trust is all we have. Don’t betray that trust.” While some act honestly and transparently and with integrity, he says, it only takes one to make people distrust the church. “Preserve the trust of your people.”

Now for the big discussion of the day, and the one most of you should be interested in:

There was a time, in the last century, when the NAD gave as much as 21% of its income to the GC budget. That’s decreased gradually through the years, which history you can see in this slide. Right now, it supplies only about 6% of our tithe—but all the rest of the world divisions only contribute 2% of their tithe. So last year at the NAD Year End Meeting (YEM), the group gathered there decided they were going to request parity: that the NAD would give the same 2% to the GC as everyone else contributes.

Apparently, as I understand it, no division gets to actually make such decisions on its own. However, the message got through, and today Elder Wilson was very conciliatory, all honey, as he told everyone how extraordinarily generous the NAD has been, and asked them all to show their deep appreciation for the NAD for the countless millions that have gone out into the world field to make it what it is. With his prompting, we NADites got some applause and an amen.

He explained how during this last year they’ve been negotiating about how to fulfill the 2018 YEM request for parity. There’s more detail than you want to know, but the short story is: they had lots and lots of meetings,

Juan Prestol, the GC treasurer, then took over. He explained it this way: “North America has come to the place where it doesn’t want to feel like a father anymore. It wants to be equal in responsibility and in mission.” Over the decades, he said, the world church has looked to the NAD for many things. Now, the NAD has its own challenges, and it wants parity in both tithe and all other policies.

Elder Prestol added some warnings. He repeated that if you accept this proposal, it will shrink the footprint of the General Conference. Some will not be able to be reelected or hired. Overall, the function of GC is going to have to reverse from where it is.

“At beginning the rich uncle gave everything,” he said. “At the present time, there is no rich uncle anymore. The need now is for the world field to exercise the privilege of growing up a little more,” he said, and letting the NAD expand its mission footprint in its own territory.

He said that the US dollar is a stable currency, and warned that many other currencies aren’t. “We’re exchanging stability for variability.”

“There will be a reduction to our net assets,” he said.

So what’s the proposal? The essence of it is this: over the next ten years, the other divisions will increase their contribution to the GC by about 1/10 of 1% a year, while the NAD reduces a graduated amount down to 3.85% by 2030. Here’s the chart. 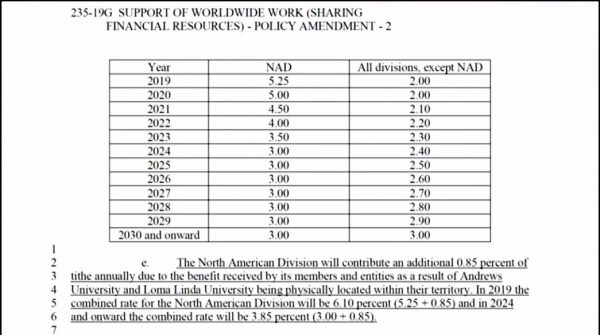 Elder Prestol said that this would allow the GC to make sensitive reductions in personnel and programming. “The church doesn’t do well with violent changes.” He wants to maintain liquidity and plan conservatively.

I liked much of what Elder Prestol said, but this bit of noblesse oblige bothered me a bit: “The lay people shouldn’t have to know where their money goes. That’s the burden of leadership.” Protect the layman, he said. Once they give their money, their interest in how it is spent is over. I found that rather condescending, and Loma Linda University (LLU) Church pastor Randy Roberts later agreed. He commented that emerging generations are no longer keen to give to something where they don’t know how the money is spent. “I’m strongly against the notion of uninformed givers,” he said. People want to know where their money goes, and he wants givers to know what happens with their donated dollars.

NAD treasurer Randy Robinson expressed his appreciation for the process and said, “This is in no way a money grab on the part of North America. This has very little to do with money, a lot to do with mission. We’re desirous of helping the world field, will continue the privilege of helping world field.”

Though some spoke against it, it wasn’t mostly those from the other unions, but people from NAD who seemed to think the NAD was being selfish. (I’m always a bit amused by people who stand up and say, “I’m speaking here today for masses of others who think just like I do.” Well, maybe—but maybe not.)

Some of you, at least, will be glad to know that the proposal passed quite handily.

Just a bit of editorializing on my part.

You should be aware that this is all part of the tension between the world church and the NAD that I spoke of yesterday—though it was a bit amusing to see it cast in terms of “The NAD no longer wants to be the father in the relationship.”

However, you’ll also realize that if we don’t achieve more regional flexibility, if we continue to have to all agree on things, like prohibiting women’s ordination (which conflict is far from dead) and abide by meeting votes where we’re outnumbered, being the doddering rich old father, with an empowered world church calling the shots, isn’t going to help church unity.

This is important: both NAD Treasurer Randy Robinson and several others noted that the intention was to pass on more money to the local field, not hire more administrators or build more offices. I also asked Randy Robinson if there was any consideration of a NAD mission board, so the NAD could take personal responsibility for some missions programs that would be affected by a reduction in contributions to the GC. (This is something Monte Sahlin and I wrote about a few months ago.) He said that it’s being considered, and I was delighted to hear it. I don’t think the NAD, given the huge amount of tithe we’re taking in, should be keeping it all to ourselves.

As for what we keep here at home: a friend of mine, a well-known pastor of a large church, wrote me a note on Facebook, concerned about how that retained tithe money would be used. She and I both know that in this denomination, money is easily spent on administrative staff and travel. As you saw on David Trim’s slide yesterday, administration has grown faster than field staff, and faster than church membership. And travel is totally out of control, in my opinion.

Elder Wilson at the end reminded people that tithe has specific uses. “There should be no misconceptions what tithe is used for when more is available,” he said. But he himself likes administrative offices—he’s spent most of his life in them—and he didn’t note what concerns most of us, which is, how do we make sure that more money in the NAD doesn’t just mean more administrators, nicer office buildings, more unasked-for programs and printed materials, and more jet-setting leaders at any level? How does this get spent in churches and schools? I hope some brave NAD committee members will ask that question in a few weeks at the NAD Year End Meeting. Local work is dying for lack of resources, and more people flying to committee meetings where they’re not really needed isn’t going to help that.

The last item of the day was a long discussion on a new abortion statement. Because it was sent back to committee after the discussion, I’m going to tell you more about it tomorrow. However, you can read it here, and make up your own mind.

Finally something of, I think, considerable importance.

As we were leaving the meeting, we were handed this statement. It recommends punitive measures toward four European entities, and two NAD presidents, for actions related women’s ordination.

If you’re looking for a way to follow Annual Council 2019 in real time, AT reporters are live tweeting here:
https://mobile.twitter.com/AdventistToday
If you don’t have a Twitter account, you can still follow our live tweets on atoday.org here:
https://atoday.org/adventist-today-twitter-feed/
The live video link is here:
https://live.adventist.org/en/events/event/go/2019-10-11/2019-annual-council/
Follow the agenda here:
https://executivecommittee.adventist.org/wp-content/uploads/2019/10/19AC-Agenda-Electronic.pdf