When the history of this church is written, the NAD Year-end Meeting of 2018 will be part of that history. Whether good or ill will probably depend on the historian.

Some are already trotting out the entirely inapplicable tale of Korah, Dathan, and Abiram. It’s not because they really expect the earth to open and swallow Dan Jackson; it’s just an acceptable way to talk nasty about someone. I want to ask, “Really, that’s what you want in the modern church? A leader who is answers to no one but God?” There’s a leader like that over in Vatican City; maybe you should follow him.

Will you give a 25th anniversary donation to Adventist Today?

For me, what happened in this meeting is part of the give-and-take of a democratic church. And I’m proud to have Dan Jackson as the leader of my part of the church, particularly after being told for the last eight years, by another leader of my denomination, that the kind of Adventism I hold will qualify me for nothing but destruction, that I’m ruining the church and working contrary to God’s plan because I read non-Adventist books, believe in women’s ordination, and meditate on God’s grace now and then.

This discussion all started with a motion on Monday afternoon by Terry Shaw, whose day job is executive at Adventist Health. He made a motion that the NAD ExCom would give Dan and his team permission to negotiate with the GC to bring the NAD into parity, within about 5 years, on the amount of tithe we send to support the GC.

For you who don’t know what this means: For many, many years, the NAD has given 8% of its tithe to the GC, while every other division in the world only contributes 2%. This has been a point of contention for a long time, but it has grown into a tidal wave of resentment in the last eight years as it has become abundantly clear that the president of our denomination has nothing but contempt for the NAD, that he disapproves everything it does and is and wants to do—except for all the money we supply to the General Conference.

Now, the amount that the NAD sends to the GC has already been reduced, and the intention is to reduce it more. But down to parity? (Parity means we’d all be pay the same, which would probably be more than 2% for everyone) That’s not been contemplated. Five years is a fairly short time to make big changes to an organization’s budget. Which is why I was quite surprised when someone said, “That’s too long. Let’s get the world church to parity in just two or three years!”

And so began a discussion about money: how much we’re giving them, and how much we need to keep it if we’re going to save the NAD church.

Now, I’m as severe a critic of the General Conference as anyone else. But here, I found myself a bit disappointed. The attitude in the room seemed to be that our church in the NAD is on the verge of financial collapse, and that extra 3-4% will save it.

Yes, I think Elder Wilson has treated the North American Division abysmally. (Virtually his every sermon is a screed against the progressive notions of the western church!) Yes, the GC has taken advantage of the the NAD financially. Elder Wilson has favored the developing world church, even to the point of (I was told off the record) promising money for their votes for the compliance committees, as well as assuring them that the compliance committees would be hands-off toward their non-compliance! Yes, some of the church entities overseas are hopelessly corrupt; as Dan Jackson said, “Two unions and 49 ordained women are nothing compared to some of the things I know about over there.”

“We have a church school that we’re going to have to close, and we’re sending our money overseas.” Yeah, and that’s because your own church members aren’t sending their kids, and that extra bit of money may prolong its life, but it isn’t going to save it without some other changes!

“I’m wondering how many pastors I’m going to have to lay off!” You’ll get a couple hundred thousand in extra money, hire a pastor and two guys in the conference office, and three years later you’ll again be saying that you don’t have enough,

“The folks overseas have to tighten their belts so we can get on with our work here.” I think their belts are pretty tight already, figuratively and often literally.

“Our young people are becoming very disenchanted with all of this… in five years we may not have a church.” That’s not a bit of an overstatement? Death in five years, for a major university church?

A conference president: “Things are tight, really, really tight… We are sending all the tithe money out the door.” All of it? So I’m assuming you got that suit from Dorcas box?

Another conference president said, “I’m crying for my people.” So do we all. 4% more tithe may not dry your tears.

A large-church pastor: “We’re interested in the church around the world—about that there should be no doubt. Having said that, we are very close to the breaking point.” Wanna see a breaking point? Go to Zimbabwe. Or Syria. Or Venezuela.

GC treasurer Juan Prestol didn’t help. You would describe his counterpoint as condescending, though at times it verged on insulting. “You’re voting with emotion. I want to bring some intelligence into this.” But when he said, “We administer mission programs on behalf of North American Division missionaries. We’re going to have to pull 500 missionary families home in the middle of their terms if you vote this,” he was right.

Now, I like having money. As Fanny Brice is reputed to have said, “I’ve been rich and I’ve been poor and believe me, rich is better.” But I still say our problem in the NAD isn’t money. It’s all kinds of stuff, including disheartening leadership at the GC. But money alone isn’t the answer. More money will simply buy more of what we’re doing, and what we’re doing isn’t working.

Please understand, I’m not arguing against North America, nor for the way NAD money is taken for granted overseas. I’m even open to the notion that the GC isn’t the best institution to hand out our largesse (though doing it independently doesn’t always work out all that well, either.) I’m just disappointed that the best argument we could come up with was that we’re so poor and on the verge of collapse. I’ve been knocking around this church for over half a century. We’re not poor. Parts of the developing world are poor.  Pastors have 15 or 20 churches. Their leaders steal the money and refuse to pay them. The pastors have no pension, no insurance.

I’ve worked for the NAD church for 40 years, and I’ve been treated well. I have a nice house and a nice car. I’m not poor. Yeah, I pastor four churches, but I’ll be honest: if every one of those churches had their own pastor, I can’t guarantee they’d grow. It’s not about money. It’s about demographics, it’s about attitudes, it’s about inward-looking churches and methods that just don’t work and, to echo Dan Jackson, malaise.

Someone even voiced the notion that once people see we’re keeping a bit more tithe (4% more), our tithe will swell because people are holding back because of tithe going to the GC. Hardly. If people aren’t paying tithe, that’s not why. Most people don’t have a clue about this, or wouldn’t care if they did. The causes of all this are demographic and cultural and systemic. 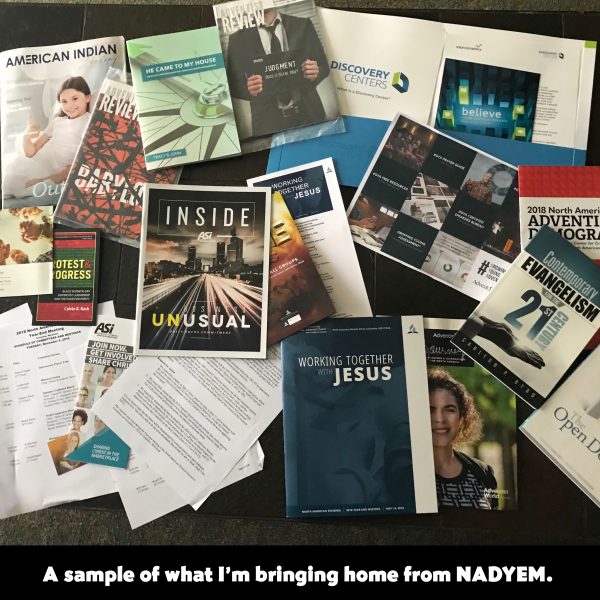 I would venture to say that we waste more money than those few extra percentage points would get us. Some of the people at the microphone saying that the church is dying jet around the world on the world’s dime. We spent about half our time at this meeting looking at materials that the big staff in the NAD office is generating (as we writers say) “on spec”—without anyone having agreed to buy it, just because they can. If no one buys it, well, it’ll go on the shelf and they’ll create something new next year, Money is abundant around here. All day budget numbers popped up on the screen that were rarely less than 5 or 6 figures. We have a total tithe in the NAD of over a billion dollars.

But elsewhere? We’re doing what we’ve always done. We’ve got money. But we don’t have a clue.

And no, we don’t trust our leaders in the GC. That’s part of it too. Elder Ted Wilson isn’t inspiring us. In fact, just the opposite. He’s discouraging us. And that’s what this was all about. This is how 8 years of resentment against Elder Ted Wilson are being expressed. The apostle says “provoke not your children to wrath,” but that’s precisely what he’s done. His stubborn, win-lose, critical, punitive attitudes have finally evoked resistance. Someone said, “We need to send a message that mission in North America comes first.” I’m not sure I agree, but I understand it.

But mostly, I think this message (to quote Howard Beale) was being sent to Silver Spring: we’re mad as hell, and we’re not going to take it anymore.

In the end, a motion was voted that went like this: “Recommend the NAD Administration to discuss with the General Conference the issue of financial parity, with parity to be accomplished in two to three years.” It passed 121 to 90.

Personally, I thought we could have afforded to give the GC the extra time to adjust. But I was only an observer—an observer who’s a lifelong pastor—but I didn’t have a voice or a vote.

Yes, I understand why people feel this way. I feel it, too. I’m just saying: I think we could have made better arguments, and been a little more patient. We’d have a better chance of looking like we had the high moral ground.