The story of Hope Center is a story of committed members who joined hands to build a conference center to promote the message of the Seventh-day Adventist Church in Andhra Pradesh, South India. It now seems that in the larger frame of things that God alone knows, what emerged alongside the new conference center was a picture of the church in that region that operates at cross purposes to the basic principles of the Bible. Deviations from Biblical counsel appear at multiple levels, and motivations vary from petty individual gain, to being serious enough to threaten the church organization itself.

What happened has already been reported in some detail. Our desire had been to create something the church in India could be proud of, and that would further the work of God: a permanent campus for the educational and evangelistic activities of the South East Andhra Section. It began with an agreement between the Williams Lake Seventh-day Adventist Church and the South East Andhra Section (Conference) of the Seventh-day Adventist Church.

Pursuant to the agreement, donors released funds for the purchase of ten acres of land. When they arrived in India, they were told a plot of five acres had been identified as preferable. When complaints and rumors started filtering in, we could get no itemized accounts of the expenses, nor were the expected instruments for securing the land, such as title documents, available. We began to see notices from Indian authorities complaining that building was happening without government permission.

Most distressing to us: the notices claimed that the land on which Hope Center stood was village land that could not legally be purchased.

Because our desire to see the church grow in Andhra Pradesh hadn’t changed, we didn’t give up and walk away, but asked for an audit. We were told that an internal audit was conducted and that it found no irregularity, though we never were allowed to see that report.

It was then that our donors decided to engage a private legal professional, an attorney registered with India’s High Court, to conduct an independent inquiry into the matter. What we have recently discovered has taken away the remaining doubts we donors may have had about whether there was corruption in the Hope Center project, and has led us to fear that the Hope Center is merely one episode in a pattern of such actions.

What the Independent Researcher Found

Symptoms of a Deeper Problem

When we donors asked Indian church leaders for accounting records and insisted upon transparency, it was apparent that leaders at multiple levels circled the wagons to discourage accountability.

Yet we were to discover that what has happened to our group is part of an oft-repeated pattern. The Jacob family of REACH International, who had raised considerable money for projects in India, in the end resorted to expensive litigation to get some clarity. An Australian donor who has raised or given nearly four million dollars for projects in India has chosen to simply walk away and stay away.

The modus operandi is simple: court an enthusiastic donor and then encourage the donor to remit money into the hands of church leaders. When donors ask for accountability, obfuscate as long as possible. If donors complain to the authorities about illegal activities, register complaints in turn about the donor to authorities, making it impossible for the donor to stay on in India. (After we began asking questions, one of our donors was followed by the secret police throughout her every stop in India. She had given her itinerary only to the conference office. She has understandably been reluctant to return.)

We have come to understand some of the societal factors that make these brazen actions possible. Money and influence play a serious role in church affairs. There appears to us to be an assembling of insider friends in positions of power, with official appointments made on a caste basis with considerations other than merit playing a major role securing a position. We see evidence of a “war chest” of money used to buy influence or silence.

We have also heard of maltreatment of pastors: pastors not being paid, and in at least a couple of situations, possible physical threats to complaining pastors.

Christians have an official minority status in India, and this is often enough to bulldoze civil authorities into not redressing church members’ or employees’ complaints. Still, the number of court cases against the church is growing and more and more often the church is losing. Dishonesty and abuse in church institutions is now appearing in the public press, with disastrous results to the church’s reputation.

A Call to End Corruption

Our donors initially thought that the Hope Center issues were a simple case of local corruption and stealing, with higher levels of the church protecting the wrongdoers out of institutional lethargy and concern for its reputation. However, since our independent inquiry, which included extensive interviews and documentary research, we now believe that these problems are systemic and deeply rooted.

While General Conference leaders weren’t directly responsible for what we experienced with the Hope Center project, we did feel that the attitude of some when we reported our discoveries demonstrated complacency and a desire not to know the full story. As recently as the Battle Creek ExCom meeting, GC leaders told us that they’d talked to Indian leaders who were attending the meeting, and had been convinced by them that we were mistaken, and that it was all a misunderstanding based on false reports from a troublemaker in India! We believe our independent inquiry puts that theory to rest.

The leaders whom we have identified say they have done no wrong, though the full documentation we have long requested has still not been forthcoming. To the extent that influence corresponds to membership in a particular region, we believe Indian church leaders have influence in the General Conference that forestalls deeper inquiry. There has been rapid growth in numbers in the South East Andhra Section—though we recommend a closer inquiry which we believe will reveal what both Indian church leaders and local pastors have admitted to us: that membership numbers throughout India are highly inflated.

Perhaps God has let the Hope Center reveal a larger problem so that corrective and preventive action can be taken both by the General Conference and authorities of the Seventh-day Adventist church in India. This is by no means a problem that only the Seventh-day Adventist church is experiencing: papers by GlobalEthics.net and the Lausanne show that corruption in the Indian church is being addressed by many religious entities working there.

We are continuing to urge a deeper investigation, as we fear unethical behavior may undermine the overall management of the church and even change the character of the General Conference itself. As Elder Juan Prestol said at the Battle Creek ExCom meeting, “Trust is all we have”—and trust is precisely what we fear is disappearing unless due diligence is done to restore it. 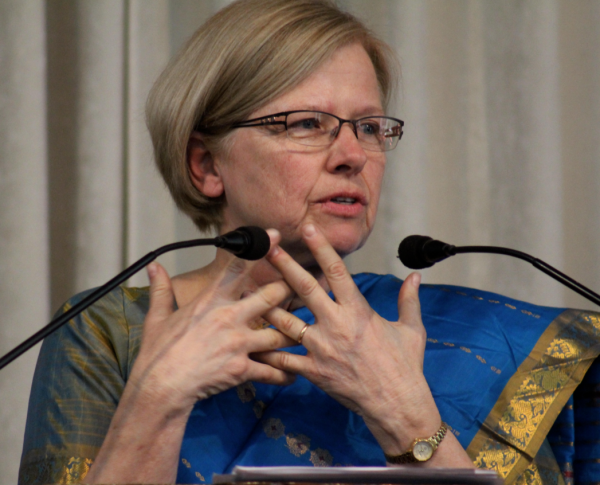 Having grown up on an African mission station in Zaire, Rita (Schaffner) Corbett jumps at any chance to be involved in a church development and health-education classes overseas. Her husband Grant is an orthodontist, and they have 6 children, 4 of whom are adopted and are the colors of the rainbow.  Rita is very involved in her home church in Williams Lake, British Columbia, and teaches family health classes in the community.