When Immigrants Take Over the Church 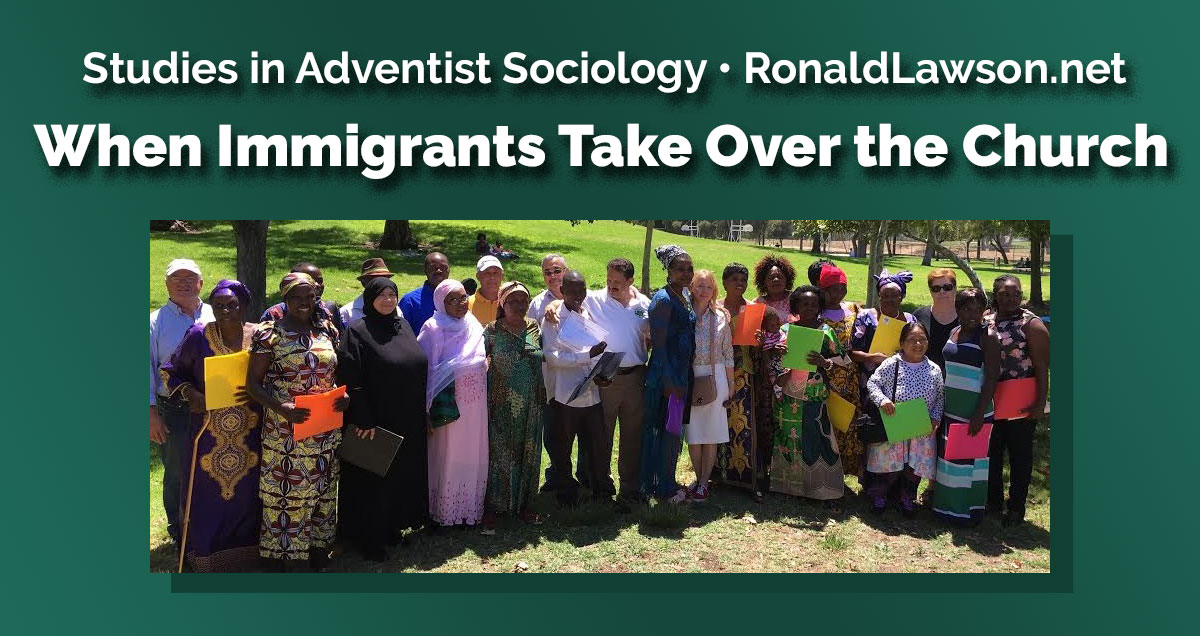 In 1945, when the regional conferences were created, Seventh-day Adventism in metropolitan New York was divided administratively into two conferences, one of which had an almost completely Caucasian membership, the other African-American. Both groups grew substantially in the following twenty-five years, but from 1968 onwards, when new immigration law went into effect, this growth was accompanied by a flow of immigrants who had become Adventists as a result of missionary activity in their homelands in the developing world. In the period between 1968 and the late 1990s, the influx of immigrants—and of conversions among their non-Adventist peers—burgeoned, while American-born members, both black and white, declined sharply in total number, and precipitously as a proportion of the total.

Living in metropolitan New York from 1971, I was aware of the transformation of the church during that period. When I asked the two conferences for data in the mid-1990s, it was obvious to me that what they had was inaccurate. So I decided to gather my own data. I sought the permission of the pastors of all the churches in the city and its suburbs for permission to ask their church clerks for the ethnicity of every active member on the church roll. When I added up what I had been given concerning every church in the designated area, the results were so significant that I wrote and published three papers on it. These are now available for anyone interested to read on my website.

The first of these papers, “From American Church to Immigrant Church: The Changing Face of Seventh-day Adventism in Metropolitan New York,” (1998) shows that “new immigrants” then accounted for almost 90% of the Adventist membership. While the situation in New York was more extreme, it mirrored a transformation that had been taking place among Adventists throughout North America—and which continues. Without the flow of immigrants, North American Seventh-day Adventism would be in a numerical decline akin to that of many of the mainline Protestant denominations.  This paper tried to account for the demographic transformation of Adventism in metropolitan New York: for the sharp decline of the American segments (Caucasians from 59.4% to 2.7% and Afro-Americans from 40.0% to 8.0%) and the huge growth among the new immigrants, especially West Indians (then 48.8%), Hispanics (18.9%), and Haitians (17.1%). Other groups totaled 6.4% at that time.

The second paper drawing from these data is “Internal Political Fallout from the Emergence of an Immigrant Majority: The Impact of the Transformation of Seventh-day Adventism in Metropolitan New York“ (1999). I explored the tensions that emerged as a result of the changed racial/ethnic balance in the competition to control leadership positions and resources, initially in local congregations and later in the conferences, and the dynamics as these tensions have played out.

The third paper in this series is “When Immigrants Take Over: The Impact of Immigrant Growth on American Seventh-day Adventism’s Trajectory from Sect to Denomination” (1999). The Adventist church in the United States has been following a well-defined trajectory from sect towards denomination for the past century: it has reduced tensions with its surrounding environment by removing antagonisms between itself and the state and other religious organizations as its members have become less peculiar in their lifestyles and beliefs and more integrated into society. However, the influx of immigrants from countries of the developing world who, generally, are more sectarian in their beliefs and behavior and more confrontational towards other religious groups than is the typical American Adventist today, raises questions of whether the immigrants will reverse the trajectory of Adventism in North America, making it generally more sectarian. The paper weighs the evidence bearing on whether this has been happening.

Although the trends outlined in these three papers apply specifically to Metropolitan New York, they are occurring throughout much of the North American Division, especially in large cities such as Toronto, Montreal, Los Angeles, Miami, Houston, and Boston. Similar, sometimes even more dramatic, trends have been occurring in some of the countries of Europe. In April I will present a paper at a symposium organized by the Adventist university in Germany, Friedensau, on such changes and pressures in England, France, and the Netherlands.

Wherever major ethnic changes have taken place among Adventists, tensions have emerged in churches, conferences, and unions as the new majority groups make changes in worship and elect their representatives to leadership positions. Similarly, since a striking majority of the members of the global Adventist Church are now drawn from the developing world, and these began to demand representation in leadership at the General Conference Session in 1985, with the result that their numbers have been swelling among the General Vice-presidents, in the Secretariat, and also among the department personnel at the General Conference since that time. Consequently, it seems inevitable that the General Conference president will also soon be drawn from their ranks.  Indeed, I would argue that the first steps towards this outcome came in 1990 and 2010 with the choices of Robert Folkenberg and Ted Wilson whose elections depended largely on votes from the developing world.