Adventist Sociologist Shares His Research on a New Website 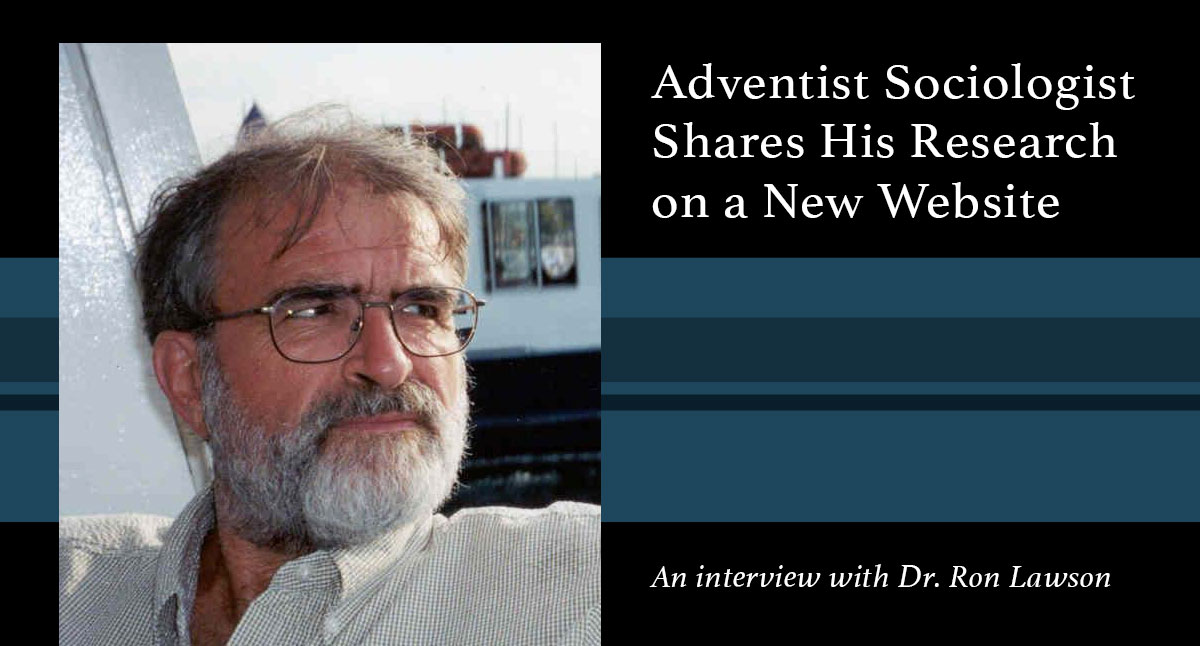 Editor’s note: Dr. Ronald Lawson has been a friend of ours for over 30 years, and an active contributor to both the Adventist church and sociological research. We’re interviewing him to introduce you to his new website, RonaldLawson.net, which will have many of his papers about the sociology of religion. Adventist Today will periodically introduce papers that Ron has made available on his website. —Loren Seibold

Ron, tell us about yourself.

I was born in Sydney Adventist Hospital, my parents devout Adventists. My father was a church elder, and a member of the Queensland Conference executive committee. I became Sabbath School organist in the church at 13, and at 15 formed a church choir. Later I attended Queensland University in Brisbane, where I again organized church music. While there I helped to set up the Queensland University Seventh-day Adventist Society, which invited speakers like Dr. Desmond Ford and Dr. Eric Magnussen, from Avondale. After completing a Ph.D. in both history and sociology, I was awarded a Fulbright Travel Grant that brought me to Columbia University in New York City, where I joined a Forum chapter that was meeting in the university chapel. I met with and led this group for over 40 years, while I pursued both academic and church musician careers in and around NYC. In 1983 I was promoted to Full Professor at Queens College, CUNY, and granted tenure. I’ve retired in Asheville, NC.

Back when my friends and I were going through puberty, I had noticed that my friends had become very girl-oriented—but not me. I was confused about this. Around 13 a camp counselor seduced me, and in our conversation answered all the questions that had been bothering me. (I had not previously heard the word homosexual, for example). It was not until I started university that I began to feel bad about my attraction to other men—not because I had heard it condemned at church, but because society told me so in various unhappy ways. Still, I knew that the church would not welcome such news.

I spent the next 15 years beseeching God to change me, and even went to the University counseling service, where I was placed on “aversion therapy”, which was a truly miserable experience. I continued to date girls in my fruitless attempt to change my orientation. I am grateful that I did not marry: it would have messed up both lives, as many others have demonstrated. Towards the end of 1973, after 15 years of pleading with God, it suddenly struck me that His failure to answer my prayers for change of orientation must surely not be because He could not help, but because He had chosen not to—and that surely meant that He was happy with the way He had made me. So I changed my prayer, asking God to lead me to the right partner.

The difficulty of finding Adventist partners was one of the reasons for founding Kinship. Our first question was inevitably “Can I be a gay Christian?” We invited the best Adventist theologians and biblical scholars to our first Kinship Kampmeeting. I served as Kinship’s Church Liaison for 18 years.

Sociology is a field that many of us really don’t know much about. Can you give us a simple definition?

Sociology is the study of the dynamics of groups of people of various kinds, ranging from families through major corporations to nations, with many different specialties focusing on the different kinds of groups. It is a social science that tries to generalize on patterns.

What has been your primary focus as a sociologist?

When I was in grad school I took a course on the sociology of religion, which gave me a new understanding of the dynamics of Adventism. Though I was unable to do my dissertation on the sociology of religion, I vowed I would launch a study of Adventism when able. My dissertation was a study of Brisbane society in the 1890s, which made me an urban sociologist. While at Columbia University I became interested in the conflict between landlords and tenants. I was awarded $200,000 by the National Institutes of Mental Health, which in 1973 was a large research grant. After the housing study ending, I decided that the time had come for me to begin the study of Adventism that I had long planned.

How did your Adventist upbringing drive your interest in the sociology of sectarian faiths?

I had considerable knowledge of Adventism when I took that first sociology of religion course. My love, involvement, and concern for my church made me see my new understandings as important and made me want to be able to share them with my fellow-believers. I have also published papers that have compared the growth, spread, and reliability of the membership statistics of Adventists, Mormons, and Jehovah’s Witnesses.

What are some of the things about us that you’ve studied?

I initially planned to focus on Adventism in North America, and spent the year 1984-5 driving 28,000 miles around the USA and Canada, interviewing pastors, teachers, administrators, leading laypersons, and students as I traveled. My itinerary included attending the General Conference session in New Orleans, where I heard delegates representing Africa demand that if the Pope could appoint African cardinals, then it was time for African Adventists to be appointed to key positions in the General Conference. It became clear to me that we were globalizing, and that with such a mix of cultures it would become difficult for us to maintain unity. My interest in the world church led me to travel to other divisions, where I sought the same array of interviews as I had in North America. I have conducted a total of over 4,000 interviews in 60 countries. I have published about 40 articles, presented many more papers at academic meetings, and have so much research that the cap of the study, which I am working on now, will be a set of four books with 50 chapters.

Where can people read your research?

Until recently only academic sociologists have had access to most of my writing. In order to make it available to others, I have recently created RonaldLawson.net. There are only three papers there now, but with the help of some dedicated Adventist friends with technical skills I plan to add additional papers until there are about 70 there. Meanwhile, I will continue with the writing of the books, hoping that God will give me the health and the time to complete them.