What’s With the Demons? 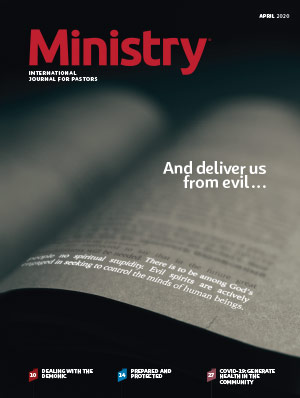 The front cover blurbs of the April 2020 Ministry magazine grab one’s attention. “And deliver us from evil…” it announces, followed by a quote from Selected Messages Book 2, page 53: “There is to be among God’s people no spiritual stupidity. Evil spirits are actively engaged in seeking to control the minds of human beings.”

Why this emphasis, and why now? Is there something Ministry editors know that we don’t?

Guest editorial and lead writer Emmanuel Osei, president of the South England Conference of Seventh-day Adventists establishes the journal’s theme: “If the Son shall set you free…” This theme will carry through the journal’s next six articles (23 of 30 pages). Adventist Frontier Missions president Conrad Vine’s “Come Out, In Jesus’ Name” (pp 7, 8), posits that demons are the fallen angels of Revelation 12, 3, 4, 9:1 and Luke 10:18.

“There Was No Doubt—a Demon Was Controlling Her”

General Conference (GC) media and communications manager Jonathan Walter tells in “You have no authority over me!” (p.9) a personal experience that occurred when he was in Portugal in 2014 attending a leadership conference. A friend and he visited a well-known cathedral. As they made their way to the entrance, they noticed what the author describes as a confused-looking woman who was being held by a worried-looking man, accompanied by a nervous-appearing priest talking on his cell phone.

Walter and his friend looked about the cathedral, though Walter felt a strong impression they should leave. Again they passed the trio standing where they had been earlier. But after leaving the cathedral, he felt a strong impression to return to the church. He and his friend stopped to pray and retraced their steps. The priest was still on his phone. Walter, in English, asked the man who was holding the woman if everything was OK. The man did not understand English, but let Walter know his intrusion was not welcome.

Though the woman remained calm, Walter states that he could see fear in her eyes and “something very dark.” Walter said he exclaimed, ‘“Believe in Jesus, and he will help you!’” At the mention of Jesus’ name, the woman began to scream, in English, ‘“No, no, get away!’ There was no doubt. A demon was controlling her.”

Walter continued to pray and said to the woman, “Trust in Christ—He will deliver you!” The woman grimaced, thrashed about and covered her ears so she could hear no further admonitions. Walter writes that he could feel physical pressure surrounding him. Passersby began to notice, and someone shouted that Walter should leave the woman alone. A police officer came to stop the prayer, but the priest intercepted the cop and proclaimed that all was well. It was then that the demon spoke: “You have no authority over me.!”

Walter responded, “But Jesus does.”

After a few more minutes of prayer and words of assurance, the woman calmed and the demon’s power was no longer evident. The article closes with words of Mark 16:17: “These signs will accompany those who have believed: in My name they will cast out demons.”

Kelvin Onongha, director of the Doctor of Ministry and Pastor of Master of Arts missiology programs, Adventist University of Africa in Nairobi references a report published in the July 31, 2017, issue of the British business journal, The Economist entitled “Why Exorcisms Are on the Rise in France.” According to The Economist, France and other nations have experienced an upsurge in exorcisms, with some practitioners charging up to $182 an hour. Exorcism, observes the author, provides a comfortable living and a certain amount of respect.

Onongha opines that the process that leads to demon possession is a subtle and progressive encounter with the dark side. Satan’s purpose, the author says, is to gain access, control and, in the end, dominion of a person’s will and abilities. He quotes Ephesians 4:27: “Do not give the devil a foothold.”

Onongha defines demonic control as a “continuum”: At one end, all humans have experienced active demon influence. At the other end are those largely under demonic control, which demon possession. The article concludes with the declaration that scripture affirms Christians are evangelists, not exorcists. “Our calling is not to pursue demons, it is to resist them (James 4:7).”

Other titles in this issue of Ministry include: “Deliverance Ministry—A Biblical Imperative,” authored by Michée Badé, a frontline gospel worker in the Maghreb; “Dual allegiance: A reflection on venerating ancestral spirits,” by Christopher Kabwe Mukuka, a pastor in East Zambia; “Dealing With the Demonic in the African Context,” edited by Kelvin Onongha and Bruce L. Bauer of the Adventist University of Africa and the SDA Theological Seminary at Andrews University, respectively.

Those of us who have been around for a time approach the subject of demons and exorcism with extreme caution. We recall a time when speakers made the rounds of local congregations, religious rallies and camp meetings, enthralling audiences with stories of deliverance ministries—a term evangelists and pastors applied to their exorcism endeavors. Evangelists such as J. Reynolds Hoffman made it the centerpiece of their ministry, explaining in graphic and powerful terms the dangers of demonic control. Their accounts enthralled audiences.

The exorcism specialists identified specific demons that resided in people. Subjects were sometimes brought to the front of auditoriums to be freed from bondage. We learned how pervasive and powerful those negative forces were, and how they worked their way into ordinary matters. The exorcist cast out the demon of overweight, the demon of addiction, the demon of headaches, the demon of acne. You name it, there was someone who could identify the responsible demon and take action to exorcise it.

Demons, demonology and exorcism have long been part of both the secular and religious tradition and the entertainment world. Comedian Flip Wilson used to quip, “The Devil made me do it!”, though few today use Wilson’s mantra as an explanation for their unrighteous behavior or thoughts.

This is not to say that the subject of the Prince of Evil and his minions has been ignored. In the December 2018 Atlantic magazine author Mark Mariani asks, “Why Are Exorcisms On the Rise?” The author interviews both those who had experienced demon possession, and others who were exorcists. On more than one occasion the author witnessed individuals who manifested characteristics consistent with what many would identify as demon possession: wild flaying of the limbs, facial grimaces, utterances in voices inconsistent with the individual and excessive muscular strength.

In interviews with Catholic priests especially trained in exorcism, Mariani learned that the requests for help in casting out demons have dramatically increased over the last few years. His conclusion: exorcism has found new footing in contemporary America! He reports that Gallup and YouGov (another data gathering firm) have found that about half of the American population believe demonic possession is real. An even higher percentage (up to 70%) believe in a personal devil.

In response, the Catholic Church has initiated training programs in Chicago, Rome and Manila. A church official quoted by Mariani claims such extensive training has resulted in well over 100 priests trained to exorcise those who show signs of demon possession.

The dramatic increase in those who claim to be possessed by demons, it is proposed, is because various negative behaviors—especially sexual abuse—function as doorways. Mariani interviews Father Thomas, who claims that as many as 80 percent of the people who come to him seeking an exorcism are sexual-abuse survivors. Other factors, according to Father Thomas, included the resurgence in magic divination, witchcraft, attempts to communicate with the dead and experiments with Ouija boards. Several exorcists proposed that the Harry Potter franchise has served to soften people’s attitude toward magic and to diminish the notion that all magic is darkness.

Millennials, claim the exorcists, have been drawn to explore the occult as a substitute for God. Carlos Eire, a Yale historian, observed that during periods when the influence of organized religions ebbs, people seek spiritual fulfillment through the occult.

Adam Jortner, an expert on American religious history at Auburn University, agreed. “When the influence of the major institutional Churches is curbed, people begin to look for their own answers.” And at the same time that there has been a rebirth in magical thinking, Jortner added, “American culture has become steeped in movies, TV shows, and other media about demons and demonic possession.”

This is not to suggest that the editors of Ministry have published an issue devoted to demons and exorcism for the purpose of reviving what once fascinated Adventist congregations around the USA. Nor is it to imply that we should avoid addressing the power and pervasiveness of evil in contemporary society. There is a place for such questions.

But questions such as these remain:

These questions, and others like them, are left unanswered by the Ministry journal editors.