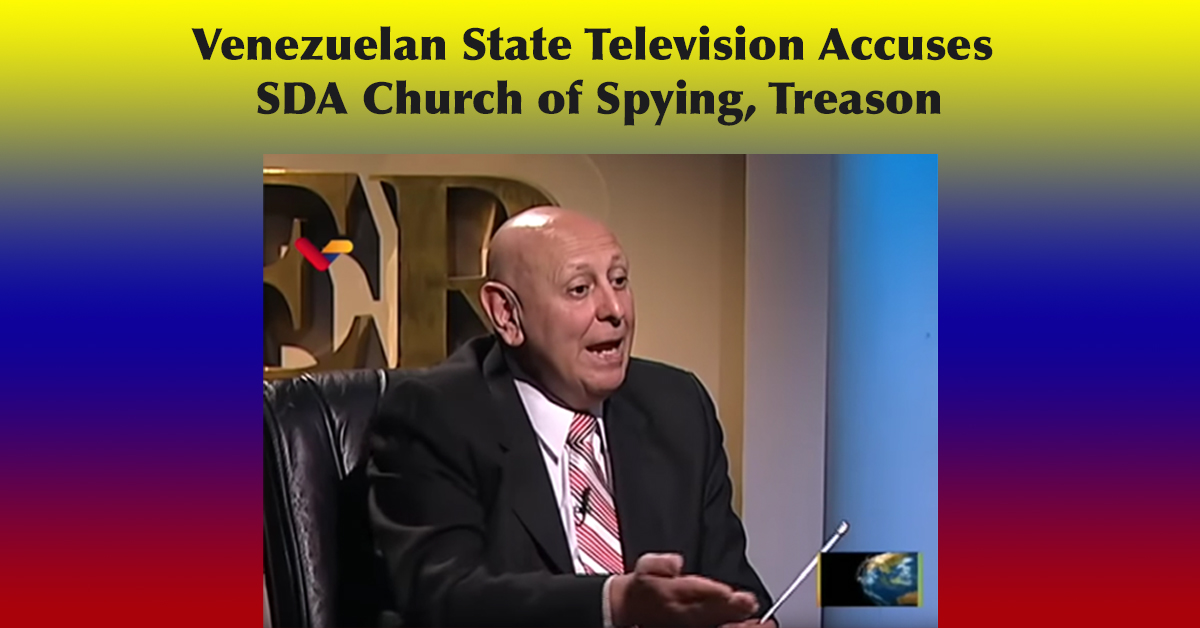 A guest on the television program “Dossier,” shown on Venezuela’s official state channel (Venezolana de Televisión), recently accused Seventh-day Adventists of promoting a secessionist movement among indigenous peoples that is orchestrated through the United States State Department and the Pentagon, as well as spying and trying to take advantage of oil reserves in Venezuela’s southern provinces.

The accusation continues a pattern of government attacks against organizations with foreign ties. In spite of vast oil wealth, Venezuela has suffered an ongoing crippling economic crisis. The ruling party is nationalist and strongly anti-American, and the United States is often scapegoated as the reason for the suffering of the country. Organizations or persons linked, even indirectly, with the United States are often accused of undermining the government.

In 2005 now-deceased Venezuelan president Hugo Chavez expelled foreign missionaries from the New Tribes Mission and forbade them from ever again entering the country. The government accused the missionaries of “imperialism,” and of interference in the cultures of indigenous peoples by forcing them to behave according to western culture. Missionaries were accused also of spying for the United States and helping foreign corporations exploit Venezuelan natural resources.

Current president Nicolás Maduro belongs to Chavez´s party, the United Socialist Party of Venezuela (PSUV), and uses similar rhetoric. His government appears to have now set its sights on the Seventh-day Adventist Church.

On the interview program “Dossier,” General Robert González Cárdenas said that the Seventh-day Adventist Church is a front for New Tribes Mission. He accuses Seventh-day Adventists of practicing brainwashing and indoctrination on new converts, as well as imposing western culture on indigenous people. As a North American based denomination, says the general, Seventh-day Adventists are spies for the United States, attempting to encourage Venezuela’s southern provinces, which contain significant oil reserves, to secede from the country.

The general links Seventh-day Adventists with Lisa Lynn Henrito Percy, a controversial leader of the indigenous Pemón people and a member of the General Council of Chiefs (Concilio de Caciques Generales) of the Pemón. The Pemón have demanded territorial rights and respect for their cultural identity, but Lisa Lynn Henrito Percy has denied that she and her people have any interest in a secessionist movement, or promoting the interests of the United States or foreign companies.

In a prepared statement, the East Venezuelan Union Mission has insisted that the accusations are baseless. The Seventh-day Adventist church has no relationship to the New Tribes Mission, nor is it involved in politics. The statement says that the church’s activities are restricted to spiritual, social and humanitarian spheres, that the church complies with the laws and rules of the Venezuelan government, and neither the church nor its leaders support secessionist movements. Nor is Lisa Lynn Henrito Percy a Seventh-day Adventist, much less a spokesperson for the church.

Church leaders have requested their own interview on “Dossier” so they can tell Venezuelans the truth about the Seventh-day Adventist Church.

The entire East Venezuelan Union Mission statement can be read in English here, and in Spanish here.