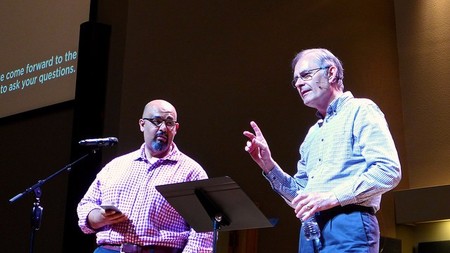 By Rajmund Dabrowski, July 1, 2016:    “To experience God, we must embrace imagination and wonder” as we read the biblical narratives. When we read them, we should “not just understand them, but enjoy them, Dr. Laurence Turner, theologian from Newbold College stated with conviction on the opening night of the inaugural Sanitas Lectures at the Boulder (Colorado) Adventist Church.

When read with imagination and wonder, “biblical stories are irresistibly persuasive,” said Turner. His first lecture addressed the question, “Why does the Bible tell stories?” Turner proposed that they are a product of Semitic culture, which explain the works of God in all of life, and to understand it, one must invoke imagination.

Turner speaks of the Old Testament as the First Testament, and explained that the Bible “is a product of [the] Semitic mind.” Turner said that, “when you want to talk about profound matters, you tell a story…. Through stories, we communicate the human aspect of our relationship with God.”

Expert in the Old Testament, Turner said that “biblical narratives convey messages through human experience.” He cited the experience of Abraham and Sarah, as well as such characters as Samson and Delilah, David and Absalom, popular with Old Testament readers and preachers.

The lecture series was entitled, “Narratives, Imagination and Experiencing God: Why the Bible Tells Stories.” The audience appeared to enjoy Dr. Turner’s uniquely witty and insightful interpretations of Old Testament themes that have made him a popular speaker for a wide variety of audiences around the world, as Pastor Japhet De Oliveira, senior leader of the Boulder congregation commented when introducing the lectures.

“One might think that a lecturer who specializes in pointing out the minute details of a story might miss the bigger picture, the grand meaning,” said Jackie Hayes, a member of the Boulder congregation. “Not so of Dr. Turner. Who would have related the fixation of the biblical Absalom on his hair, even the weight of it, with the cause of his very demise?”

The presentation showed how repeated details of biblical stories often were major clues to the point of the story, Hayes added. “Who knew how important the stories of Samson and Delilah and David and Bathsheba were in showing how little departures from God’s plan for us can lead us step by step away from our calling?”

Reflecting on the lectureship, De Oliveira commented that “from the texts, emails, and conversations, the inaugural Sanitas Lectureship was a complete success. People were inspired to return to the Bible with fresh eyes and open hearts.”

On the final day of the series, the presenter spoke on ways to read and preach biblical narratives. These lectures were primarily aimed at assisting clergy in their preaching. Adventist pastors from the northeastern part of Colorado were joined by clergy from other Christian churches in Boulder.

Initiating the Sanitas Lectureship, the Boulder Church intends to create a safe place for people to connect with God as presented through the lens of the Bible, says De Oliveira. Named after Sanitas Mountain behind the church campus at 345 Mapleton Avenue in Boulder, the congregation invites the community to consider the church a destination where biblical scholarship is celebrated and shared.

According to De Oliveira, the lecture series will be an annual event and “will include presentations from world-renowned experts in Old and New Testament Scriptures, all with the purpose of understanding more about how the God of the Bible is still at work in the shared story of humanity.”

Hayes smiled as she said that, “only one aspect of Dr. Turner’s presentations was missing; more! The little dip into understanding the difference between Hebrew and Greek thought, and the presentation on David and Bathsheba left me wanting more; more of Dr. Turner’s wisdom and knowledge and more delving into the messages God wants me to get from His Word.”

Adventists have a rich history in Boulder, a university town of 103,000 population located 30 miles northwest of Denver. In 1895 the Boulder Sanitarium was started at the foot of Sanitas Mountain, one of the original Adventist hospitals connected with Dr. John H. Kellogg and Battle Creek Sanitarium in Michigan. The hospital has been moved 10 miles out into the suburbs between Boulder and Denver and is now named Avista Adventist Hospital.

The Boulder Church has nearly 700 members. One of its primary “mission fields” is the University of Colorado located in Boulder with an enrollment of 33,000 students.