The Revelation: The Book For These Difficult Times 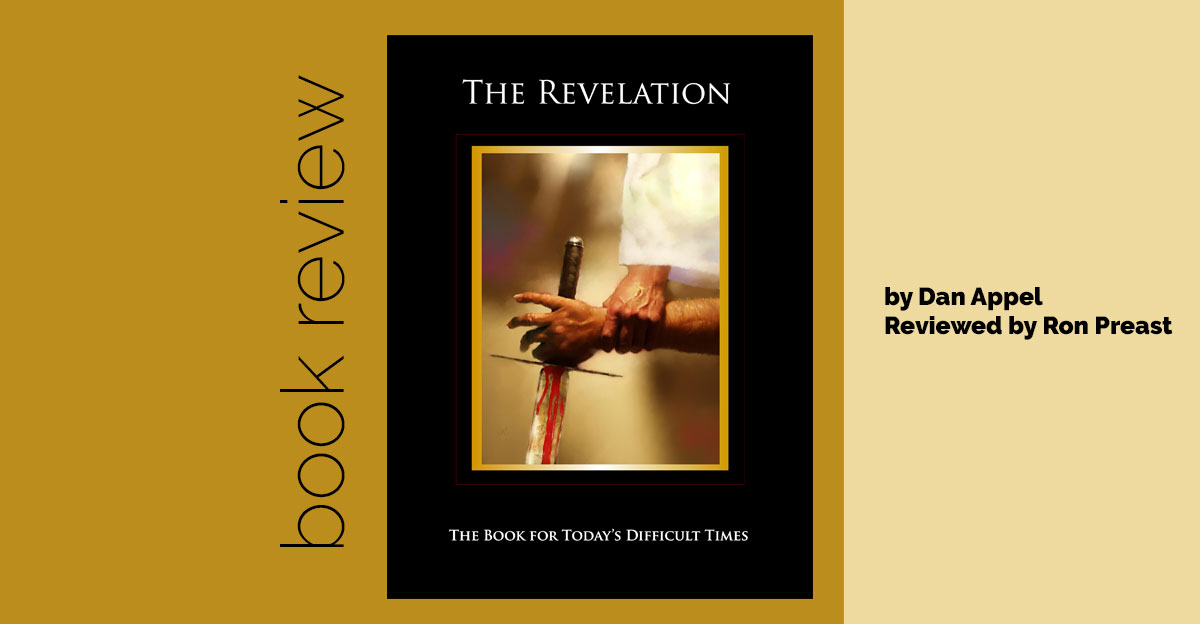 The Revelation: The Book For These Difficult Times, by Dan Appel. Available on Amazon. Reviewed by Ron Preast.

Dan Appel says in his new commentary, “I grew up in a family where I was taught to respectfully question everything I was told or taught.”

In this book, Dan continues to question interpretations and ideas that he was told and taught. He says “some may disagree with various or many of his conclusions. That’s okay.” He invites us to come along on his journey to understanding this very complicated book of the Bible.

The first six chapters give us a foundation for his understanding regarding Revelation’s theology, his beliefs concerning prophecy, and his particular approach to this book. This is followed by a chapter-by-chapter commentary, along with Appendices that further explain Revelation. Coming in at 867 pages, it offers thorough coverage.

Is Revelation a book of prophecy where everything is set in stone and will inevitably happen the way we have believed? Could this be a book where prophecies could have happened, had God not changed His will according to our reactions to world events, like in the story of Jonah? How are we to understand Old Testament texts quoted out of context in the New Testament? Dan explores this by helping us to understand the conditional nature of prophecy.

When Dan introduces the text of Revelation, he begins each chapter with a paraphrase of the texts. Even here, there are footnotes that question the authenticity of the verses. For instance, is Revelation 1:1-3 a part of John’s original book or was it later added by a well-meaning scribe? While this question is raised in the paraphrase, it is never addressed, leaving the reader to decide for himself. Raising questions leaves the reader the opportunity to study these matters for himself rather than rely on another’s interpretation.

While Dan does accept many of the traditional interpretations of Revelation, there are some he rejects. He does believe that the 1260 years points to the Dark Ages experienced by the followers of God, and that the first beast of Revelation 13 is pointing towards the Catholic Church as it went astray from Jesus’ teachings. He is careful to make sure people understand that when he refers to Catholicism he is speaking of the organization and not the sincere believers of the church.

If there is a weakness to this book, it is that Dan sometimes raises questions for questions’ sake without giving us alternative interpretations. The number of the beast may be 666 or 616—but I wish he’d help us to know what difference it makes. If the second beast is not pointing to America, what is it? I think it is good to question our traditional beliefs, but I also think it would be good to then offer an alternative interpretation.

There are parts of the book I do not agree with, and I’m appreciative of Dan’s saying, “That’s okay.” For example, I believe inspiration can be proven through science, history and the study of God’s word, but Dan doesn’t. His conclusion is that “the issue of inspiration is very subjective.” He concludes,

You can’t prove something is inspired, no matter how we have tried to do so, any more than you can prove that God exists. All you can do is accept that it is, for you, based on evidence you consider trustworthy, and the opinions of those whose opinions you appreciate and trust. There is not concrete proof of belief – only faith based on evidence that we subjectively choose to accept.

I found it interesting that Dan would be writing a commentary on a book of the Bible we believe is inspired by God and then conclude that whether it is inspired or not is left for us to decide. He includes a long quote from Ellen White, who many believe is an inspired prophet, regarding the nature of inspiration! (To be fair, he does conclude with six points for how he determines if a person or text is inspired.)

I recommend Dan’s book, The Revelation: The Book For These Difficult Times. While you will agree with much of his interpretation, you will also disagree with some of his explanations. This is Dan’s journey into this book, and he invites us to come along with him.

Perhaps joining him in this journey and feeling safe to raise questions regarding our traditional interpretations is how we can grow together. Maybe what we must accept is how little we actually can know about the book of Revelation. While parts of it we may understand, much of it is still a mystery to us. We must be willing to study together and grow in our interpretation and understanding. The Revelation: The Book For These Difficult Times aids us in our journey.

A study guide is also available.

Ron Preast is a retired pastor and evangelist in Washington.