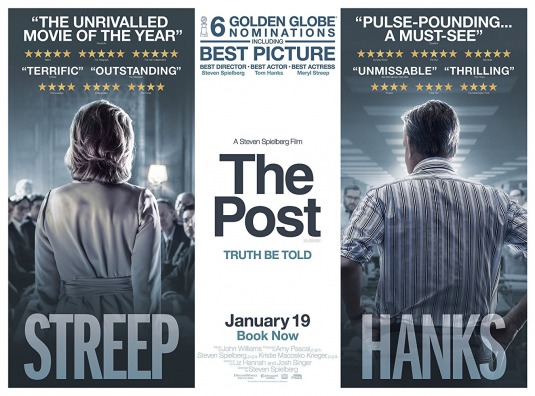 Where would we be without news, and the reportage of such? As Phil Graham, publisher of the Washington Post, observed, “News is a rough draft of history.”

And George Santayana, a Spanish philosopher, said, “Those who do not remember the past are condemned to repeat it.”

History was made in June 1971, when the executive branch of the United States government went head-to-head with newspapers—specifically the New York Times and the Washington Post.

The fact that I knew the outcome (the Supreme Court’s 6-3 decision: news is for the governed, not the governor) did little to reduce my appreciation of The Post. The 130-minute-long true docudrama, was put together in six months by master auteur Steven Spielberg, and features two A-list actors, Meryl Streep as Katharine “Kay” Graham, first female publisher of a major American newspaper, and Tom Hanks as Ben Bradlee, editor of the Washington Post.

Some reviews I read prior to writing mine extolled other films, such as All the President’s Men, as a gold standard for comparing films of this genre. However, The Post can stand on its own, no assistance needed or apology required. A good movie engages, enlightens and entertains. By those criteria, this movie succeeds.

Daniel Ellsberg, former Marine, Harvard graduate, and Rand Corporation military strategist, purloined close to 7,000 pages of a secret study commissioned by then Secretary of Defense Robert McNamara. Ellsberg shared the material with the New York Times and then with the Washington Post, after the Times was enjoined from further revelations by the government on the grounds that national security was at risk. The Times, and a short time later the Post, stood to be prosecuted under the Espionage Act. People could go to prison.

The above reminded me of Edward Snowden’s disclosure of the extent to which the National Security Agency gathered information on U.S. citizenry. Ellsberg, although initially charged, was declared innocent in 1973. Snowden is still a fugitive in Russia and may forever remain a man without a country.

So, do ends justify means?

One example from Holy Writ: Rahab, who hid 2 Israeli spies and then lied about their whereabouts. To my knowledge, she was not punished for her mendacity. Rather, she and her family were saved when Jericho fell. She may also be saved a second time.

Four Presidents (three Democrats, one Republican; neither party has a lock on virtue or lack of same) over more than two decades knew about Southeast Asia in general and Vietnam in particular, and deliberately chose to mislead the American public. By 1965, McNamara knew the Vietnam War was unwinnable, yet persisted in sending U.S. soldiers to die and be maimed. The breakdown of the rationale to continue the war: 10% to win; 20% to contain communism; 70% to save face.

By the end of the War, 58,000 Americans had lost their lives. Many times that number were wounded. And this doesn’t include the Vietnamese.

It is difficult to like old men in power who send off young men (and women) to fight their wars. In 1955 folksinger Pete Seeger wrote a poignant song entitled, “Where Have All The Flowers Gone?” Performed by many artists, it speaks with poignancy of the futility of war and the sorrow it engenders. There have been many anti-war songs, but it remains one of my favorites.

While it is true man came from dust and is destined to return to such, there is no reason to shorten the timespan in-between. Civil War general William Tecumseh Sherman declared: “War is hell.” And he was speaking of a war he considered righteous. What of one wherein an American sleeps with a pistol beneath his pillow because the Vietnamese soldier who fights with him during the day may morph into a Viet Cong at night?

Vietnam unified after the Americans left. Nixon may have done many things wrong, but I think he did one thing right: end U.S. involvement in the Vietnam War.

I do think North Vietnam made one crucial mistake, however—they didn’t let the U.S. ‘win’ the war.

Both Germany and Japan, enemies of the U. S. in WWII, became economic powerhouses after the war ended. America, with programs such as the Marshall Plan, is often generous with its vanquished enemies. With adversaries it fails to vanquish? Perhaps not so much.

Although my understanding is that the U.S. and Vietnam have friendly relations and do business, things might have been even better had Vietnam allowed the U.S. to save face. The desire to save face isn’t unique to the Orient.

Kay Graham was in a difficult position. Somewhat of an aristocrat she was friends with Robert McNamara, much as Ben Bradlee had been with JFK. Would publishing a portion of the Pentagon Papers constitute a betrayal of that friendship? Plus, the Washington Post had fallen on hard times and, in an effort to remain solvent, was planning a public offering on the American Stock Exchange. Would publishing the Papers jeopardize financing?

Several of Graham’s minions certainly thought so, and told her as much. It would have been easy to listen to them, to not risk being shut down by the courts and, even worse, imprisoned. If the public offering failed, the newspaper might go out of business.


Will you give a tax-deductible donation to Adventist Today?

Instead, Graham listened to Ben Bradlee and herself, and, in the end made a decision which seems to have been the right one. For as Bradlee asked (in paraphrase), “If we don’t hold their feet to the fire, who will?”

It is a tribute to our founding fathers that despite often turbulent seas, icebergs of malfeasance, mines of iniquity, and fierce winds of change, our ship of state has remained afloat and pretty much on course. It was their genius that created the three branches of government: executive, legislative, and judicial. Those, ideally, remain independent of one another.

Newspapers, or their equivalent, can be considered a fourth estate in the system of checks and balances.

Richard Nixon once said (in connection with Watergate), “If the President does it, it’s not illegal.” But he was wrong. No one is above the law.

Jeff Bezos, CEO of Amazon.com, Inc., and one of the world’s richest, owns the Washington Post.  He purportedly wants to do good during his lifetime.  In my opinion, one of the things he can do to that end is keep the Post alive and well.

We the People deserve the truth.

For what are we without it?