The Past with a Future, Day 1—Morning Report 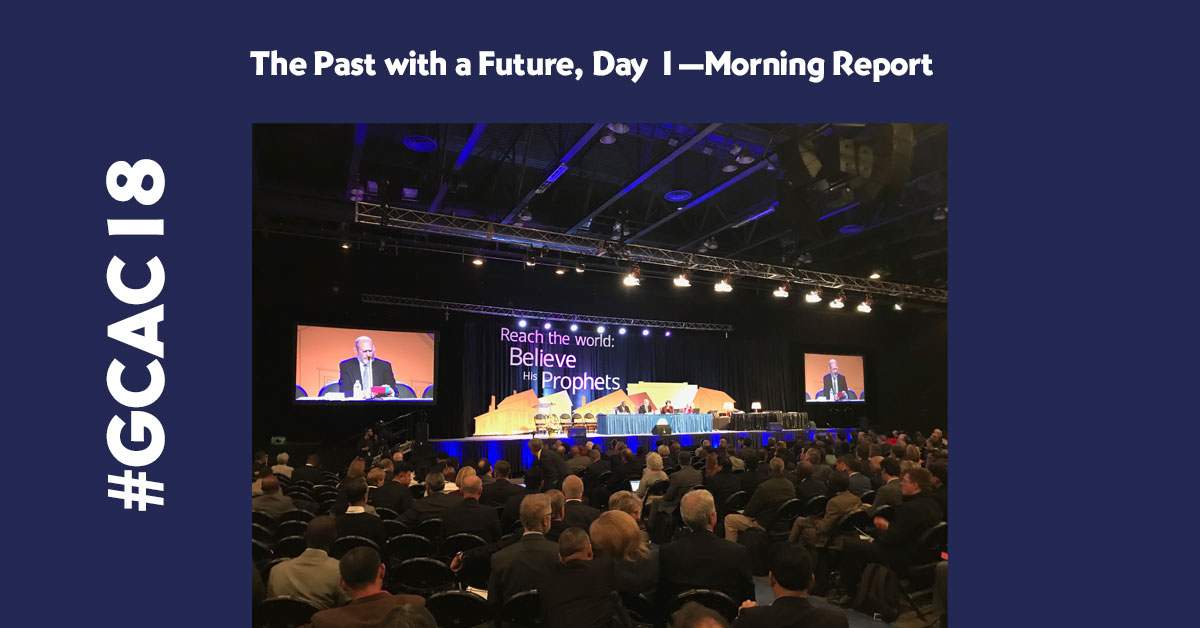 When I was a child growing up on the Great Plains, there was a town not far from us that every year held what they called “Pioneer Days.. It was innocent enough. There was a parade through town of antique cars and tractors and horse-drawn buggies and wagons. As many people as wanted to dressed up, either in old-fashioned suits and string ties saved for the occasion, or cowboy or farmer clothes like boots or hats or bib-overalls. There was an old-fashioned country band that played a few old numbers, and a square dance, as I recall. All good fun.

But at this General Conference (GC) Autumn Council, for some reason, the Adventist cosplay doesn’t seem as much fun. First of all, because it’s not an entertaining event, but the highest decision-making body of the church. And what decisions are before it! Dressing up like the pioneers seems just too on-the-nose for the topics being discussed, as though our leaders are trying to push us back to the past.

Except that this is a fiction: our authoritarian past is imaginary. The pioneers were actually quite libertarian in their views on church authority. A friend dug out of the archives the report of the meeting in Battle Creek back in 1861. It was in Battle Creek that the brethren struggled with the decision to adopt a name, and in the process challenged the very notion of denominational authority.

It is also here that John Loughborough spoke his famous denunciation of creeds:

The first step of apostasy is to get up a creed, telling us what we shall believe. The second is, to make that creed a test of fellowship. The third is to try members by that creed. The fourth to denounce as heretics those who do not believe that creed. And, fifth, to commence persecution against such. I plead that we are not patterning after the churches in any unwarrantable sense, in the step proposed.

Here also is where James White made this statement on progressive truth:

Suppose the Lord, through the gifts, should give us some new light that did not harmonize with our creed; then, if we remain true to the gifts, it knocks our creed all over at once. Making a creed is setting the stakes, and barring up the way to all future advancement. … The Bible is our creed. … We take the Bible and the gifts of the Spirit; embracing the faith that thus the Lord will teach us from time to time.

Is there a greater irony than this for Autumn Council in Battle Creek in 2018?

The setting for this important event is the Kellogg Arena—a far cry from the meeting house of 1861. It is a multi-use sports arena (I’m picturing basketball, though I’m sure many events can be accommodated) that has more room than we need. Which is rather nice, for a change.

The first story here is that the income is good. The church has seen a 9% increase in tithe from the North American Division (NAD) and good increases from other tithe powerhouses (like Brazil), and much of this, it was said, is because of a new dynamic appreciation of stewardship.

But the story that caught my attention was an extended report on what Elder Prestol called a gift of “extraordinary tithe.” AT reported on this last week. An Oregon Conference (OCSDA) member gave a massive tithe gift in 2007—we’re talking 100 millions of dollars, with more promised as their multinational company was sold in installments. Note that detail. Explained Juan Prestol: given the unusually large amount involved, and the fact that the business was multinational in nature, it was the consensus of leadership, local, union, division and GC, that the GC was in a better position to receive and apply the funds.

Juan Prestol went to extraordinary lengths to explain that they didn’t keep the funds or misuse the funds (which wasn’t really a question). More importantly, he explained that they had had to write themselves a variance to policy, because the policy says that any tithe that comes in from a member has to be returned to the field where the member has his membership. That wasn’t done. The GC just wrote themselves a variance from policy and kept the money

Oregon, I should add, is protesting this. Why? Because money is still coming in from this sale, and OCSDA says they should have it. Juan Prestol insists that every multi-million dollar addition is grandfathered under the original variance from policy the GC wrote itself 11 years ago.

Elder Prestol explained the history and transparency of this whole affair. Yet it struck me as a long explanation that explained everything except why Oregon isn’t getting its share. No one is accusing the GC of misusing this money. But, as Randy Roberts pointed out, you’ve got to wonder why they get to write themselves policy variances when they need one, but “This is being reported on the same day when people are requesting a variance for policy [on women’s ordination] and are considered for punishment for wanting that variance.” The GC is varying from policy in the background, he said, but we can’t get a variance of policy for people who are actually doing the work of Jesus—and in fact GC leaders are trying to force them into compliance.

G.T. Ng was back to his usual good-natured self, after last year’s report which was a rather embarrassing scolding of the church. This year’s report was mostly presenting statistics with a bit of humor. I won’t give you all of it, but here’s a few tidbits: SID (Southern-Indian Ocean) has the largest membership at 3.9 million, followed by ECD (East-Central Africa) 3.84M, and Inter-America 3.79M. Africa is probably the youngest church membership in the world field. The Americas have the most ministers of all categories. Countries with the highest membership: Brazil at 1.7 million, India at 1.6 million, Zambia at 1.2 million, and the USA at 1.16 million. Highest baptisms? ECD (East Central Africa), SID (Southern Africa-Indian Ocean), SAD (South America). The NAD has the most hospitals, but Africa the most clinics and dispensaries. Lowest number of SDAs per capita? The MIddle East & North Africa Union, with 1 SDA to 137,000 people.

Dr. Dragoslava Santrac is the new managing editor for a new SDA Encyclopedia which will be online and eventually published. They’re trying to gather more information.

Unlike previous years, they’ve put the big discussion at the beginning of the business session. If you want to reacquaint yourself with the central document being discussed (what we’ve been calling the “compliance process” for short) you can read it here. We’ll be tweeting and Facebooking this afternoon’s discussion.