The Lethality of Lies 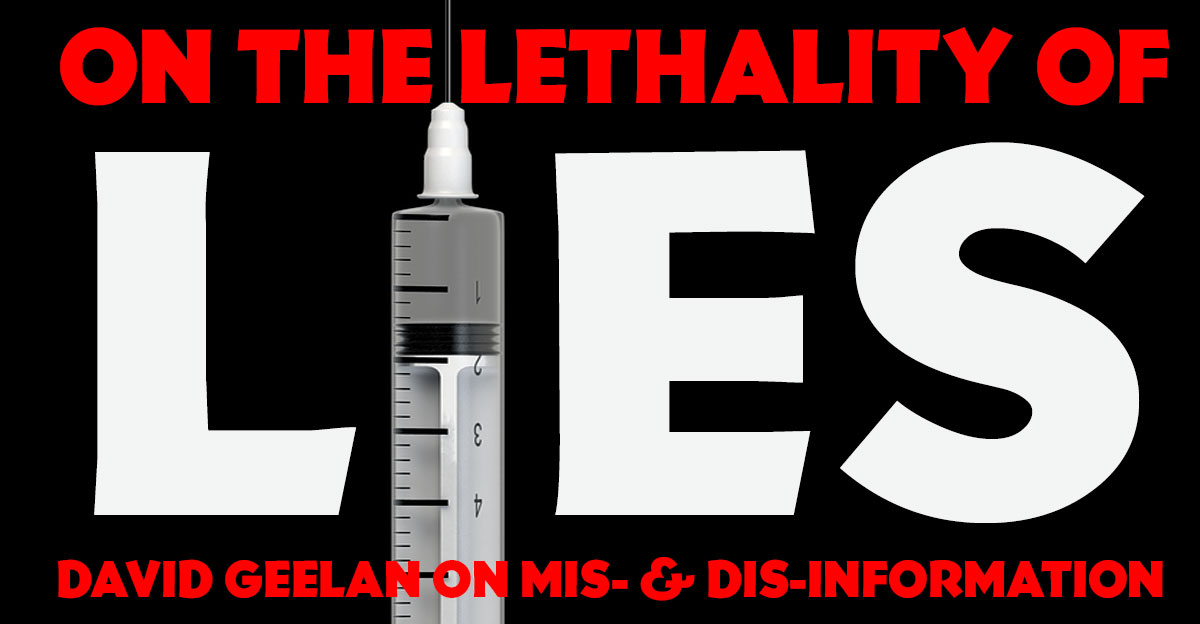 One of the comments I make most often on Facebook posts—so often it may well be annoying to my friends—is brief and simple: “The truth matters”.

It’s a core belief, because of its obverse: lies kill.

In his recent Adventist Today article “Anti-Vaccination Is Not Our Message,” Loren Seibold laid out some of the ways in which misinformation and disinformation around COVID vaccines has led to excess mortality – people who need not have died in this pandemic have died because the truth was not told.

But the consequences of both for the recipient are the same: forming a world view which is not in accordance with the truth.

Truth is an interesting concept. In one sense, it might sound odd for someone like myself who acknowledges the postmodern condition and recognizes the complexity of claims to truth to so passionately advocate for truth. (If you’re interested in more discussion of this, my essay, “Scientism and Grand Narratives: Understanding the Postmodern Condition” was published in Adventist Today a couple of years ago.)

The philosophers have come up with several accounts of what it means for something to be credibly described as “true.” For the purposes of this discussion, where our focus is on matters of fact like the effectiveness of vaccines and the risk of harmful reactions to same, a “correspondence” theory of truth will work. That is, “a true statement accords with the facts in the world as they actually exist.” If I am 5’8” (1.73 m) tall but claim to be 6’0” (1.83 m), that would not be a true statement, because it does not accord with the state of things in the world as it is.

It’s sometimes challenging to ascertain those facts, though. As one example, the death toll from COVID in the United States at the time of writing is just over 931,000 souls. That number is as accurate as it can be made, but it may be an over-estimate if people who actually died of something else while having COVID are counted, and it may be an under-estimate if people were diagnosed as dying of other things who died of COVID. So the true number is probably somewhere between 700,000 and 1.1 million.

But the VAERS allows any person to submit a report of an adverse event, with no quality control, no checking and no assurance as to whether the reported event was caused by, or even related to, the vaccine. Given that there are highly motivated and active anti-vaxxers, the incidence of flawed or inaccurate reports may well be quite high. 24,000 is probably a very large over-estimate of the true number of adverse events.

(Some consider that the terms ‘anti-vax’ or ‘anti-vaxxer’ are used as dismissive pejoratives. I’m not using them that way, just as concise descriptors of people who oppose the use of vaccines in general or particular vaccines in particular.)

The bottom line: combining these two pieces of information, and noting that there have been 550 million vaccine doses administered in the United States and the mortality rate for COVID in the US is close to 2%, there is no world in which being vaccinated is more dangerous than contracting COVID-19. It is tens or hundreds of times less dangerous, at least. Even if we accept 24,000 as an accurate number, in 550 million vaccinations that’s a 0.004% chance of an adverse event, 500 times smaller than the chance of dying if you contract COVID.

Some folk will insist that their perspective is not anti-vaccine, but anti-mandate. They will claim not to be opposed to the choice to take a vaccine but to governments or other bodies such as businesses and educational institutions making vaccination mandatory. Despite the protestations, I suspect that the Venn diagram of those who are actively positive toward vaccination for themselves, their loved ones and everyone and those who oppose government mandates is a fairly small overlap.

I don’t know of any nations or states that have made vaccination mandatory for all citizens, with sanctions for those who choose not to be vaccinated. There are mandates in particular industries, and for particular activities such as travel. Typically these are designed to reduce the spread of the virus from areas or populations where it is extremely common, to those where it is less so. Many of these mandates are likely to be temporary during this early acute phase of the pandemic and to be reconsidered later.

Are governments perfect in their responses and decisions in relation to the pandemic? Clearly not: different jurisdictions have made quite different decisions, with quite different results, and there is not really a jurisdiction anywhere in the world that has got it perfectly right. There are likely to be valid questions to be asked.

The recent protests in Australia and parts of the United States, and the truck convoy in Canada which has led to the declaration of a state of emergency, though, seem disproportionate in response to the issue.

Freedom of choice always comes with consequences. In Australia, as in many parts of the world, you have the freedom to choose to smoke, and the freedom to dine in a restaurant, but not the freedom to do both at the same time. Those restrictions, that smokers must smoke outside, are based on a public health consideration for the health of people other than the smoker—just like the requirement to be vaccinated in order to come onto the campus of the university where I work.

The conflation of “freedom” with the specific issue of vaccination mandates has tied it in with libertarian views on a range of issues, and has led to some very strange – and quite disturbing – bedfellows. Loren’s article addressed the ways in which anti-vaccination and anti-mandate messages tend to be combined with a range of other conservative, right-wing and extreme-right talking points and messages, and that has been the pattern in Australia too. Protestors with valid concerns about the lockdowns and some of the other means chosen by governments to respond to the pandemic, and by the unfair ways in which government support was distributed, have been horrified to find themselves in protests with people waving white supremacist banners. Protestors in Australia urinated on and desecrated a Shrine of Remembrance. That’s not representative of the broad range of protestors, but it’s the kind of thing that can occur when a range of issues and lies are tied together by irrational anger.

One issue that has been drawn in is the claim that high government officials are involved in organized pedophile rings. This claim has also been made by QAnon in the United States. Here in Australia these two issues—anti-mandate protests and pedophilia—have been conflated, at least partially by a Seventh-day Adventist lay preacher named Graham Hood. Pedophilia is a horrible crime, and has hit close to home for me personally, and I abominate it. But false witch-hunts against non-existent pedophile rings actually harm effective law enforcement action against pedophiles.

The lies being spread in a number of different fields – not just differences of opinion or political views, but actual lies in the sense that the claims made are not in accordance with reality – and the combination of constellations of these lies in the world views of a growing number of people, are incredibly dangerous. These deceptions have the power to kill, not only through people choosing to avoid masks, vaccination, isolation and other methods of avoiding COVID infection, but through domestic terrorist activities.

Mike Burgess is the head of the Australian Security Intelligence Organisation (ASIO). In his annual threat assessment report he warned that “‘angry and alienated Australians’ could turn to violence after being exposed to ‘an echo chamber’ of extremist messaging, misinformation and conspiracy theories during the coronavirus pandemic” (this reported by Laura Tingle of Australian Broadcasting News).

Other writers on Adventist Today have considered the relationship between some traditional Seventh-day Adventist beliefs and a vulnerability to conspiracy theories. But the growing vehemence of the protests and protest movements that we see arising, and the claims about the malevolence of the very scientists and doctors struggling to save lives, are a dangerous trend, and one worth resisting. In the church and in the world.

Let me end where I began, with a statement that I believe is non-partisan and universal, and which I commend to everyone: “The truth matters”.

Dr. David Geelan is Sue’s husband and Cassie and Alexandra’s dad. He started out at Avondale College, and is currently Professor and National Head of the School of Education, within the faculty of Education, Philosophy and Theology at the University of Notre Dame in Sydney, Australia.