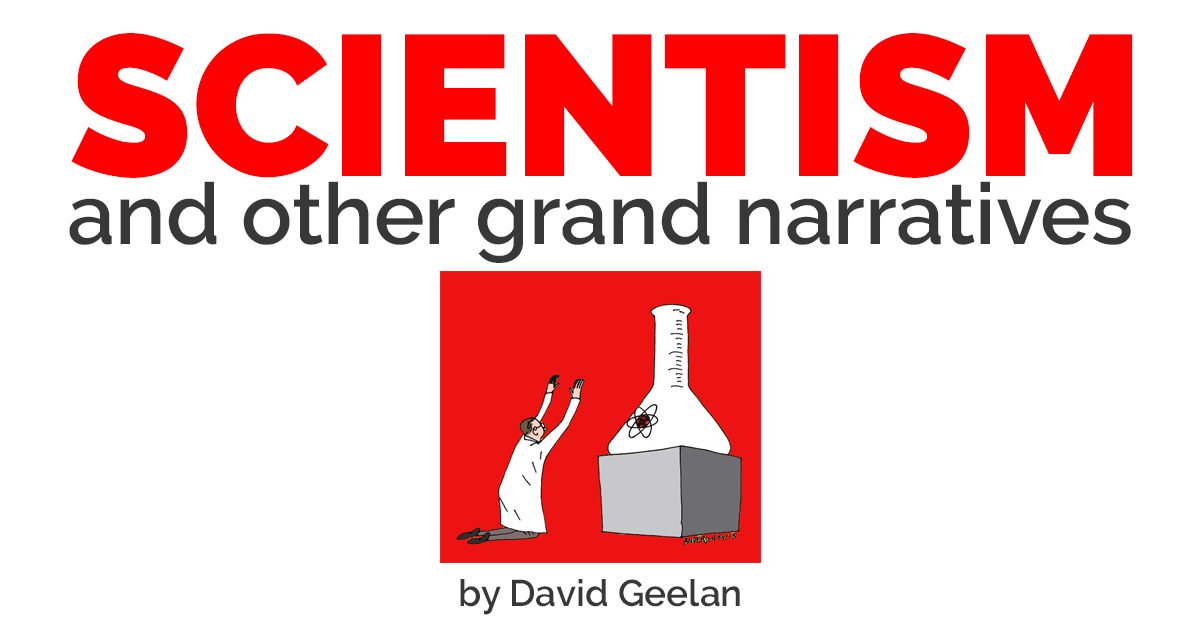 Science and its colleague technology have done much, throughout human history, to expand our understanding and control of the world around us and to enable us to enhance our lives. This is true for both high and low technology. I’m writing this on a computer much more powerful than those used to send human beings to the moon, but perhaps the technology I’m most grateful for is an older one: the eyeglasses that make everyday life accessible for me.

That success on the part of science can lead some people to overestimate its power and influence—and, perhaps more importantly, its scope of operation—and decide that all human knowledge can be encompassed by science. This is “scientism”: the view that only scientific knowledge is real and “counts.” All other domains of human knowledge are considered to be either derived from science or else to be illusory.

A brief note on words and meanings here. A person who subscribes to socialism can be described as a “socialist,” but it is not the case that the word “scientist” applies only to people who subscribe to scientism. Indeed, most scientists who have a good understanding of the nature and philosophy of science reject scientism. They understand that there are other branches of human knowledge such as the arts, humanities and religion which have their own forms of valid knowledge and their own procedures for generating and testing knowledge claims.

Scientism is an example of what the postmodernists (my thinking about this draws mostly on Jean-François Lyotard) would call a “grand narrative” or a “totalizing narrative.” A grand narrative is a story that claims to be able to explain everything in the world and everything in life, and explains away any other way of believing or perceiving the world as an error or delusion. Scientism is a great example to use to understand this concept, since most of us would have engaged with people in our lives who will accept only scientific evidence for any claim, and reject any other arguments as deluded.

Grand narratives are the defining characteristic of “modernism.” There are many examples. Marxism is a grand narrative. It claims that everything can be explained using “dialectical materialism” and the conflict between the working class and the owners of the means of production. From within a Marxist perspective anything else, such as religion, is to be understood within that overarching narrative. Most religions (with the possible exception of some forms of Buddhism and some kinds of polytheism) behave like grand narratives. They seek to explain all of life, and other ways of looking at the world are interpreted as delusions or deceptions.

Most preachers I’ve heard speak or write about postmodernism get it wrong, to my mind. They tend to describe postmodernism as an ideology, a belief system in its own right, that can be summed up as “anything goes”: the belief that there are no rules, and any belief or action is as good as any other. This is neither accurate nor helpful. Postmodernism is not nihilism. While the French philosophers who wrote about “the postmodern condition” have a range of views, largely they saw themselves as describing the world and human interactions with it, not prescribing the way it should be. The key characteristic of the postmodern condition is “skepticism toward grand narratives.”

A Condition, Not an Ideology

The postmodern is not a period in history that comes chronologically after modernism, but a “condition.” In part the impulse toward it came from the two World Wars, the detonation of nuclear weapons in Japan and other events of the first half of the Twentieth Century. These events were interpreted as the clashes of competing grand narratives, which had led to much human suffering and which seemed incapable of moving humanity forward. Technological advances were seen as being driven by war, and turned toward the goal of more efficient killing.

Another element of the postmodern condition is greater access to news and images from around the world. At the beginning of the 20th century the great majority of what people knew was about their local town or village. News from a distance appeared in the newspaper, but was largely communicated by mail or Morse code, and could take weeks to arrive. At the beginning of the 21st, we are deluged by news from all around the world, 24/7.

When the usual mode of life was to be in a small community of like-minded people who all shared the same grand narrative, it was easy to accept that our own view of the world was the truth and every view held by people elsewhere was false. As we came to see more different peoples and events, different ways of living and thinking, different religious traditions, it became more difficult to hold on to the assumption that one grand narrative is True and the ways of living of all the people in the world who do not share it—which may constitute a majority of the world’s population—are False.

This means that history did not move into a “postmodern” period, to be followed by a post-postmodern period or some other description. Rather, many people began to exhibit skepticism toward grand narratives—to recognize the postmodern condition. At the same time, clearly many people still accept and subscribe to various grand narratives, including capitalism and democracy.

Since postmodernism is a condition rather than an ideology, people do not so much come to believe in it as come to recognize it. They come to see the world in terms of a range of competing grand narratives. They are likely to reject the totalizing claims of any given narrative: rather than a single grand narrative that explains everything, they will be more comfortable holding a number of different narratives in tension with one another.

They may, for example, recognize that all developed economies are ‘mixed’: they each partake to some extent of both socialism and capitalism. Seeking to understand these economies entirely through the lens of a single grand narrative tends to “force into blindness” important elements required for full understanding.

This also suggests that where people who recognize the postmodern condition continue to participate in religion they are less likely to regard it as a grand narrative that explains everything, and more likely to hold it in tension with narratives more directly focused on issues such as environmentalism, justice, humanism or other views on what is real and what is important in the world.

People who do not recognize the postmodern condition tend to be modernists these days (though there may well also be pre-modern thinkers, who live in a world that is much more syncretistic, and may combine magical thinking with religious belief with various other views).

Interestingly, many of those who leave Christianity and Adventism do so because they are modernists who encounter scientific evidence that challenges their strong belief in creationism, supernatural healing or some other Christian belief, and transfer from one grand narrative—religious belief—to another—scientism. Some of the most vociferous critics of faith are those who have made this transition, and who now interpret the grand narrative to which they were previously deeply committed as a maze of delusion, out of which they have a duty to lead others.

Postmodernism is neither anathema nor a panacea for religious belief. It is, however, something that I would argue is worthwhile understanding. Rather than preaching against (a mistaken strawman version of) it, communities of faith are richer if they recognize it and seek to show how faith is compatible with some of the other positive values people hold.