The Future of the Catholic Church with Pope Francis (BOOK REVIEW) 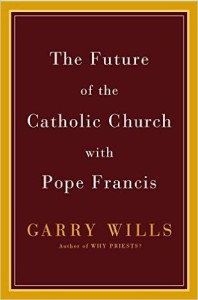 Author: Garry Wills (Penguin Group, 2015):  Reviewed by Edwin A. Schwisow, September 10, 2015:    I was reared in an Adventist home where I was taught that “the Catholics” were shameless, truth-rejecting, alcohol-bibbing, commandment-breaking, idol-worshiping, violence-prone blasphemers who claimed the rights of God on earth and ultimately would try to kill those of us who refused to accept their brand of totalitarian Christianity (my apologies to those who may be offended by my rhetoric here; I am simply describing the histrionic inventiveness of three kids who had been taught in sermon after sermon, lesson after lesson, that Roman Catholicism would be the primary contributor to time-of-the-end chaos such as had never before been known on Planet Earth. )

My sisters and I in fact created a little game known as “Catholics and Adventists,” in which the two sides would attempt to present the most derogatory reasons possible as to why the other side was decisively wrong (long harangues about the proper day of worship were favorite elements of the game; the audacity of the Pope to claim to stand in the place of Christ on earth—”Antichrist”—was another hot button in the game.) Each afternoon the game grew rowdier and more tumultuous, until Mother finally outlawed “C&A” altogether, apparently believing that the game itself would eventually cause a “Time of Trouble” such as had never before been known in her house.

Why is it that we Adventists hold the Roman Catholic Church in such depredation and disrepute, while we so seldom actually study the history and inner workings of the organization? Are we afraid that we might find something admirable and seductive underneath the harsh rhetoric? In my class work in Adventist education, not once did we seriously ponder the doctrinal progression of the Roman church, except in the context of its failings (as described by Protestant writers). I was well into my teens before I learned as a fact that the clerics of Rome were responsible for delineating which gospels and other elements of the New Testament were to be included in the canon, and which were to be discarded (quite a sobering revelation, which I determined could be accepted only by crediting the Spirit of God with salvific sway in safeguarding Holy Writ, even years after the Catholic Church had succumbed to the influences of the Dragon).

In Pope Francis we have a far more “accessible” prelate than in the past, one who once upon a time walked the same streets and visited some of the same buildings we Adventist missionaries did in Latin America, from the days of Fernando Stahl forward, in a post-Vatican II world in which the Roman church buried the hatchet of overt persecution and  its clerics began to wear civilians’ clothing and celebrate the mass in the popular languages of the day. One fine day I well remember, Padre Jaime Postma, leader of our local diocese and a concert pianist, showed up at our front door and asked if he could play our piano for a while, and would any of the local children be interested in lessons?

Mother invited him in and we enjoyed a concert right there in our front room, but Mom turned down his offer of lessons, still fearing that his primary goal was to indoctrinate her children, who only three years before had been playing “Catholics and Adventists.”

My personal experience as a maturing Adventist roughly corresponds with the material in Wills’ book, “The Future of the Catholic Church with Pope Francis.”

Wills sees his Church (yes, Wills is a liberal, intellectual Catholic himself) as a massive institution that changes slowly but surely, regardless of the particular Pope at the controls, even as the hands on a clock keep time, but without appearing to move except through time-lapse exposures.

The book itself is more a review of the life and times of the Church leading up to the coronation of the first Jesuit pontiff, rather than a biography of the pontiff himself. This is understandable, given the newness of Francis on the world scene. Wills looks primarily at five vital areas of Church practice, beginning with the decision long ago in Rome to conduct all masses in the Latin tongue (in a move to encourage  unity among the far-flung dioceses by teaching and preaching in the universal language). For the same reason, today, Latin (now considered a dead language) is discouraged in the churches, in an effort to better minister to contemporary generations.

Adapting to a World without Monarchies

In its early days the Church depended on a symbiosis with monarchies to survive and defend its far-flung real estate holdings. With the decline of monarchies, many of these holdings are no longer proprietary to the Church or are simply guaranteed constitutionally, in some way, in the countries where they are located. In Mexico, for example, it is illegal for a denomination to formally hold title to land, yet there are Catholic houses of worship by the thousands. The absence of monarchies in the West continues to alter the ways the Papacy plans for the future.

The Coming and Going of Anti-Semitism

For centuries improbable stories and misunderstandings pitted Jews against Christians throughout the former Roman Empire, and into the New World. The Jews had firmly established themselves as providers of financial services, which the Roman Church required in a world where they were biblically prohibited from paying or charging interest. Yet the Jews, who could lawfully negotiate interest rates with non-believers, had a hard time in a world where one could be an international banker or a Christian, but not both simultaneously. Certainly the position of Jews as experts in finance contributed to serious sociological misunderstandings and many attacks against Jews by enraged Christians. The calming of anti-Semitism is changing the way the Church functions and safeguards its wealth.

The Coming and Going of Natural Law

The Catholic Church has traditionally seen the world and its Heaven as naturally patriarchal and God Himself as masculine. With the arrival of the enlightenment, more and more the Popes have defended their traditional interpretations by interpreting Natural Lay to concur with their traditional understandings of the way God wants things to be. In a world of advancing education, this is less easily done today.

Consequently, concerns about natural law have enmeshed the Church in round after round of controversy about the proper roles of men and women in the Church, of sexual responsibilities and procreation, and ultimately the very purpose of marriage itself. Large numbers in the Catholic Church are unmarried and nominally celibate, a situation now slowly being addressed by Francis, as he appears more open than former Popes to relax the strict restrictions on marriage of clergy.

Use of contraceptive routines, medications, and devices are still nominally prohibited in many cases, but the Vatican no longer appears to be focused on contraception, except in the matter of abortion, which it vociferously opposes.

The Coming and Going of Confession

The practice of formal confessions and masses are in many cases the financial foundation of the Church, and appear to be here to stay for a long time.

How interesting that the Church has held on most tenaciously to the very rite that got it into so much trouble with Reformers in the 16th century. Luther rebelled against the Church in large part (it was the straw that broke the back of his religious camel) because of the Church’s claim to hold the salvation of individual members in its hands, and could determine the eternal fate of any and all, by divine authority purchased by the penitent with money.

There is little doubt that the Roman Catholic Church continues to fight for relevance in a world that increasingly has less and less room for religious ritual. But the Roman church has shown itself to be a vibrant force in Western civilization, and there’s no doubt it will remain so for a long time to come.

Whatever the case, the Church under Francis seems determined to raise its profile higher and higher in our lives, and assume more and more relevancy to everyday people. How well it succeeds will be interesting to observe, and whether or not other denominations follow suit is surely indicative of the Catholic Church’s fortunes in the developed and developing world today. This is a recommended book, though it moves slowly and is very thorough, something we Adventists may find unusual in a book about our perceived nemesis and natural adversary, the Catholic Church.

Anybody for a game of C&A?