It’s good when church leaders focus on learning how to serve the LGBTQ+ community, on how to stop causing harm to that community.

These are worthy endeavors. Yet in focusing on their own behavior, they may be missing what is the biggest advantage of including my community in the church: our church is enriched by the presence of and the ministry of LGBTQ+ people.

Adventists have a problem: we aren’t very open with one another, because the Adventist church is not a good place to be imperfect or even to be different. Sooner or later, most of us end up hiding something from our brothers and sisters in Christ.

For most, it’s nothing as big as being gay, trans, or bisexual. When I was trying to keep my Adventist community from realizing I wasn’t straight, I worked hard to project the image of who I was supposed to be so I could be safe. I wasn’t dating other women, so that wasn’t an issue, but I tried to make my gender expression fit in as much as I could. I dialed myself way down. I tried to blend in. I don’t think LGBTQ+ people are the only ones doing this.

Our Sabbath morning polish is meant to give the impression that we are good Adventists. As a child, I grew up in a family that was sincere in its pursuit of Adventist values. There was no pork, no alcohol, no cursing, and careful Sabbath observance. That’s why I remember how scandalized I was when I saw an adult from church order a pepperoni pizza.

Of course, as I grew up, I realized that most people were actually badventists behind closed doors. The real problem came if those doors cracked open and the rest of the church saw what was meant to remain hidden.

A friend I grew up with had a child when we were just out of academy, and she wasn’t married. For many years, she didn’t want to go to church. She was afraid that the church members were judging her. Honestly, I didn’t understand it. At the time, I was pulling off the Adventist thing pretty consistently. But stay in the church long enough, and you might find yourself cultivating an image.

When I became a pastor, authenticity became too much of a hassle. It was easier to wear skirts if I was on the stage, to keep my little caffeine habit to myself, to move those fantasy books out of my living room when certain church members were coming over, and to be careful what movies I was watching. I didn’t realize it, but rather than participating in church in a genuine way, I was cultivating an image.

These little things were nothing compared to some of my other struggles. When my dad got cancer, I didn’t talk about the hope I had that God would heal him, and the slow fade of that hope as I realized I needed to let it go for my own sanity. Wouldn’t such an attitude be perceived as a lack of faith? In fact, once when I was praying with a mentor, I prayed for strength for my family, but not healing for my father. He said he wanted to “correct” me, and prayed for my father’s healing. My church was not a place for me to talk openly about one of the great tragedies of my life.

That wasn’t my only problem. I was bewildered about my sexuality, not understanding what was happening and knowing for certain that no one could know about it. I was also sorting through the challenges of being single as a pastor. I thank God for a couple friends who helped me through that time, but I realize how much I had to project an image of having it all together. I think it’s harder for pastors, but I don’t think it’s only pastors. Adventist churches aren’t good places for struggle, uncertainty, doubt, and difference.

This is why so many Adventists secretly fear that they aren’t righteous enough for heaven. There is not much assurance of salvation in the Adventist church. There’s a lot of pain in the pews, a lot of fear, a lot of people trying to fit in because they don’t feel like they belong. If you are wondering if it’s just you, let me assure you that’s not the case.

This is especially difficult because Adventist identity says that we have something good that the rest of the world needs. On some level, I still believe that that special something we have is a message about the extravagant love of God. That’s what it should be about. It should be about the righteousness of Christ.

In practice, it’s more about the rightness of Adventism. It’s about being the church with the right beliefs, that does the right things, that lives the superior Adventist lifestyle. We are a church that excels in personal rightness, but doesn’t know how to love. And frankly, the worst among us are those who think they are living up to the ideals. I’ve been there, too.

I’ve been the annoyingly perfect Adventist who didn’t understand why other Adventists didn’t just stop eating cheese. It might be the furthest I’ve ever been from the character of Jesus.

What my people offer the church

The great gift of being LGBTQ+ is that moment when we finally come to understand that we will never fit in (let alone belong) in Adventism. So we stop trying. When you can’t find belonging in the old ways, you are forced to find them in new ways.

Because I am open about my sexual orientation, I’m never going to be a good Adventist. When my wife divorced me, that knowledge only deepened. Now I couldn’t even be a model LGBTQ+ Adventist, who was everything the church wanted me to be, except my spouse was a woman instead of a man. There went my last hope of respectability. It crushed me; then it set me free.

When I stopped trying to fit in, at last abandoning the illusion of personal righteousness, I learned to structure my faith on a new foundation. No longer on grains of sand. I built my new house on the rock of God’s love. It was either that or have no spiritual home.

If you’ve spent time with fully affirming LGBTQ+ people, you will notice that our faith is different. I admit that we don’t do these things perfectly, and there are exceptions. But I have found that the shift is noticeable. I rarely find the pressure to try and fit in in these communities. Our belonging with God is not based on our personal righteousness. It’s based on God’s love and our own worthiness as children of God.

Doesn’t that sound like something the Adventist church needs? I think it is. It sounds to me like living water for thirsty souls. That’s what the Christian and Adventist LGBTQ+ communities have meant to me. 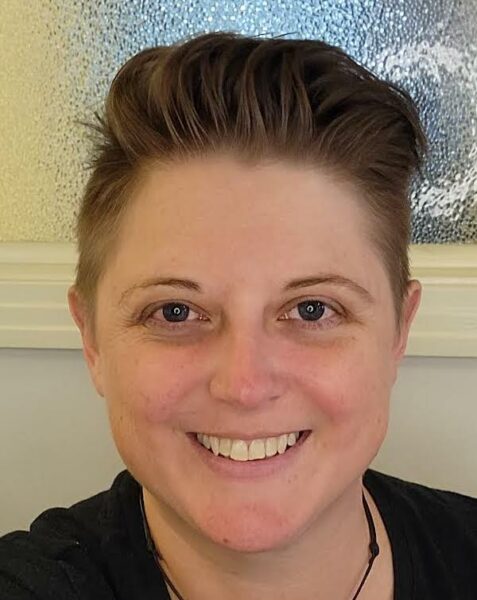 Alicia holds an MDiv from the Seventh-day Adventist Theological Seminary, as well as an MA in Clinical Psychology. In 2017 she came out as LGBTQ-affirming and as bisexual, which ended her ministry in the church. Alicia has written a book explaining affirming theology for Seventh-day Adventists called The Bible and LGBTQ Adventists. Her passion is helping Christians see why they can affirm same-sex marriage and support gender transition. See her work at www.aliciajohnston.com.