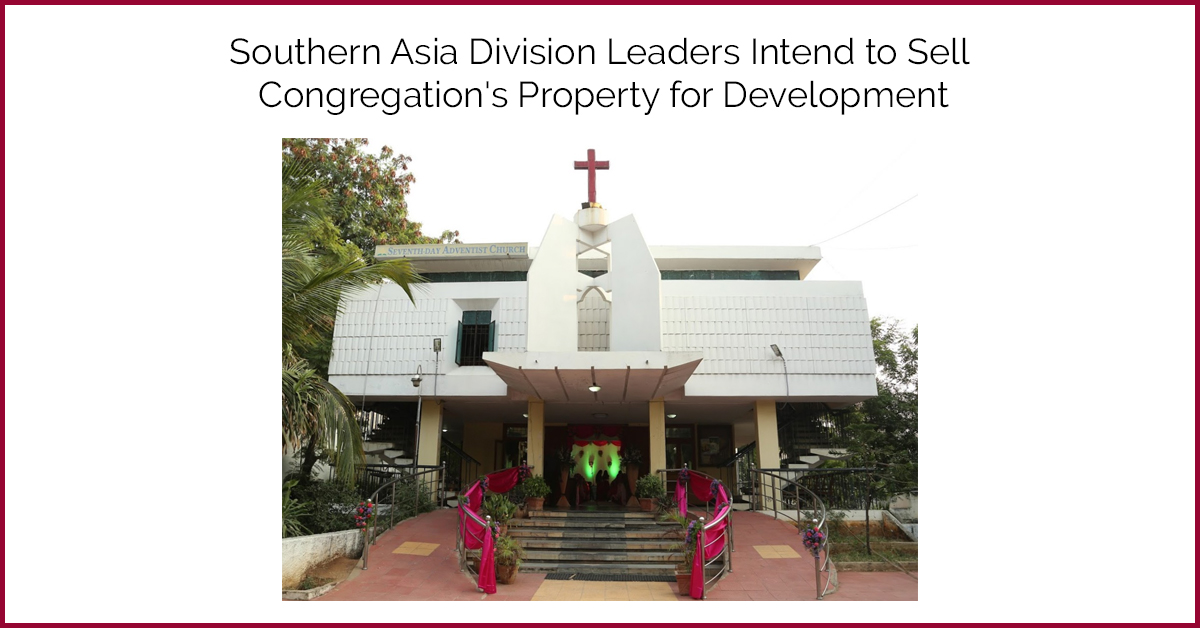 In the ongoing saga of questionable management by Southern Asia Division officers, church members in the Hyderabad Seventh-day Adventist Church have gone to court against administrators who want to dispose of the congregation’s valuable property for commercial development.

The sale of the property is being spearheaded by East-Central Indian Union (ECIU) president John Victor, secretary Samuel Paul, and treasurer Edward Pilli Prasad, under “the direct supervision” of Southern Asia Division secretary M. Wilson, according to an informational letter distributed by Hyderabad SDA church members.

These are the leaders of the same union that contains the South Andhra Section (Conference), which oversaw the construction of the Hope Center, first reported by Adventist Today, a project from which large amounts of money given by a group in Williams Lake, British Columbia, are alleged to have been stolen. First steps to pursue redress in the Hope Center case have already begun.

The letter states that the leaders entered into an agreement with Devendra Constructions to develop the Hyderabad church property and share the proceeds, with 45% of the development going to the developer as its share. Church members point out that property that was purchased for church work could now be populated with bars, movie theaters, dancing establishments, and businesses that operate during times when the church is meeting for worship or other activities.

The permission to proceed with building has already been received, with the result that the taxes on the church property have increased 500 fold.

According to SUD policy on building plans and approval (Bylaw and Working Policies, Page 348), “Prospective church sites and building plans shall be approved by the Union/Conference/Section Committee concerned, and the Division Building Committee.” Further, “Where building cost shall exceed 1,000,000 [local currency units—in this case rupees], the project building plan has to be referred to the division building committee for its approval. Projects exceeding US$500,000 equivalent shall be referred to the General Conference.”

The sale is being pushed by the aforementioned ECIU officers, but according to insiders with whom Adventist Today spoke, they have bypassed Hyderabad SDA members and the Hyderabad Metro Section (Conference).

Says the letter, “It may be mentioned in this connection that the SDA leaders with the connivance of their subordinate staff have already sold many church properties, like the one in Cunningham Road, Lowry Campus, Kadapa, Kodaikannal and many other small properties. They have been eyeing the Hyderabad church for 15 years” before recently seeking city permits for development.

The letter makes the accusation that church leaders are ramming this sale through because they will be personally enriched by it. Alexander Samuel, a Seventh-day Adventist of Indian origin who lives and works in Minneapolis told Adventist Today, “Westerners do not realize the extent to which corruption dominates all business in India, and the church is no exception. The church members’ suspicions that the church leaders who are pushing this sale could personally benefit from kickbacks and bribes is not without merit. It puzzles those of us who have seen this, and other underhanded business deals by Indian church administrators, that General Conference leaders seem unconcerned and uninvolved.”