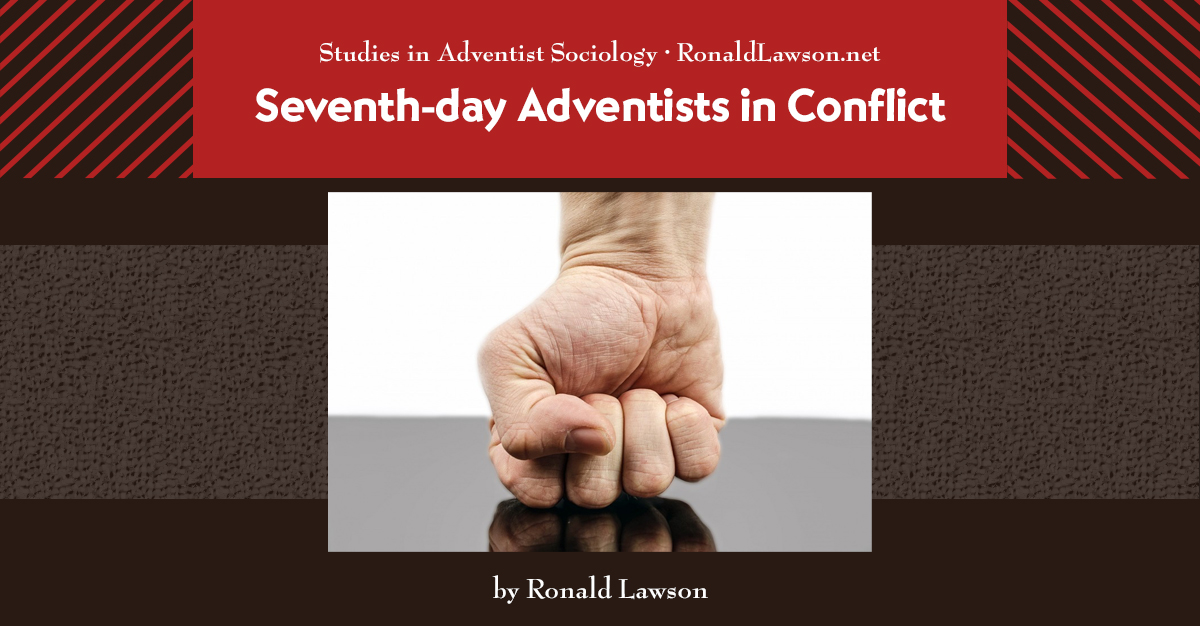 This paper explores the issues that were at the core of the conflict, its dynamics, and the outcome.  It would be interesting if readers made a list of the major conflicts that rocked Adventism during the period 1970-1984 before reading the paper, and to then check how well their list matches that in this paper, which was written in 1984.

It was written when my friend Maren Lockwood Carden and I were considering launching a study of Adventism in the USA and Canada. We did this, and I spent the academic year 1984-85, while on sabbatical leave, traveling 28,000 miles around the North American Division, visiting churches, educational, medical, and publishing institutions, conference, union, and General Conference headquarters, and the 1985 General Conference Session in New Orleans. It was my attendance at the latter Session that persuaded me that any serious historical and sociological study of Adventism had to be global in scope, considering the growing proportion of the membership in the Developing World and the consequent growing power of those regions within the world church. This decision sadly forced Maren Carden to drop out, for she was unable to travel abroad, since she had a young son for whom she was responsible.

Because of Ellen White’s inconsistency, both sides of Adventist doctrinal controversies have been able to appeal for support to the authority of the prophet.

Adventism, like all sects, was prone to divisions and conflict during its early decades. Since it lacked trained biblical scholars but contained many members with a great enthusiasm for amateur Bible study, differing interpretations of theological issues were rampant. Because of her authority and a good ear for the way the wind was blowing, Ellen White became the key arbiter of conflict. However, the prophet apparently felt no great urge to consistency, so that to her may be traced two quite different doctrinal faces of Adventism that we have dubbed “sectarian” and “mainstream.” While, for example, in some of her writings she was lashing out at “apostate Protestantism” while portraying the central role Adventism was to play in the final scenes of “the great controversy between Christ and Satan,” she was in other writings (it has been shown recently) boldly plagiarizing the leading Protestant authors of her time to develop themes taken straight from mainstream Christianity. Although she did grow towards the mainstream, especially after a doctrinal upheaval in 1888 in which she sided with those introducing “righteousness by faith” to Adventism and against those continuing to stress a legalistic “last generation perfectionism,” if she saw what she felt to be the roots of Adventism or her own authority being challenged (by, for example, allegations that the biblical support for the doctrine of the heavenly sanctuary and the 1844 investigative judgment was weak), then she grimly defended sectarianism. A result of Ellen White’s inconsistency has been that participants on both sides of Adventist doctrinal controversies have always been able to appeal for support to the authority of the prophet.

Many of the questions that had been current during the lifetime of Ellen White were raised again from time to time after her death in 1915. However, church leaders became more adept at keeping such disputes under covers, and therefore often papered over and unresolved, with the result that the typical Adventist throughout the period 1915-1970 understood church doctrine as a unified belief system. That is, the period was, on the whole, stable.

This paper is concerned with two time periods: first the quiescent years, 1915-1970, and second 1970 to the present, a time of renewed questioning and conflict. We ask two questions. Why were challenging issues not raised effectively during the earlier period? And why did they come to the fore in the late 1970s and early 1980s?

You can read the entire paper here.