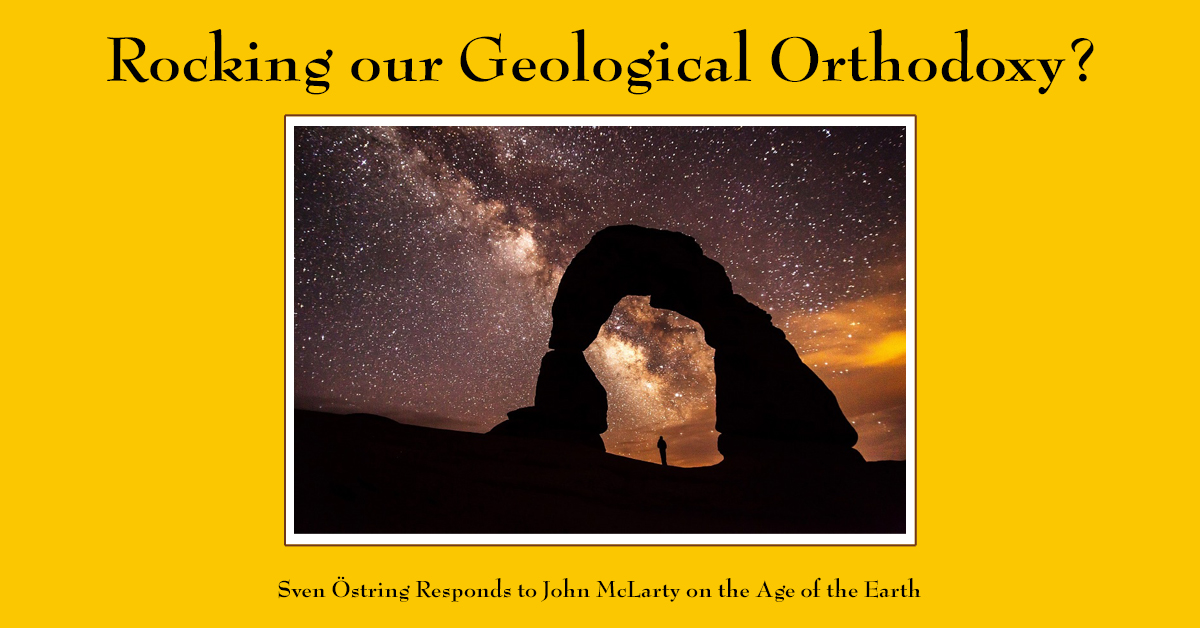 I am delighted and encouraged to read that John McLarty is committed to being a lifelong student and enquirer after truth. This is evident from his careful and fairly accurate observations regarding the spectrum of creationist positions within the Seventh-day Adventist church. It is also evident from his commitment to leading his Talking Rocks Geology Tours, which I would love to join some time, if the opportunity presents itself. It is McLarty’s commitment to truth that leads him to challenge my article “Our Miraculous Planet Earth” in his response “6 Days and 6000 Years for Everything? “God did not teach the rocks to lie”. McLarty appeals to us to be committed to further investigation and meaningful debate, and the reason he does this to encourage all of us to be lifelong students and enquirers after truth as well.

A careful read of McLarty’s response identifies that his main concern is that he believes that my article is redefining Adventist orthodoxy with respect to creationism. Of course, he does mention in passing some critical issues that need to be addressed, including the starlight travel time problem and the standard geological dating methods that are confirmed by multiple lines of evidence. I’m going to focus on his main concern, and for now refer you to other in-depth evangelical Christian assessments of and resolutions for the issues McLarty has raised.[1]

The main reason why Adventists like McLarty accept deep time dating models is because they accept the scientific orthodoxy regarding the ages of the universe, earth and life itself. As Desmond Ford has observed, the scientific conclusion that “the world is four and a half billion years old is now an axiom for scientists.”[2]

However, Ford’s use of the word “axiom” has some strong connotations, particularly in the minds of most lay people. An axiom is a statement or proposition which is regarded as being established, accepted, or self-evidently true.[3] While the deep antiquity of the Earth is certainly regarded as being established and accepted by the majority of scientists, the implicit claim that it is self-evidently true is more problematic. If something like the age of the Earth is described as being axiomatic, then it is held to be self-evident or unquestionable.[4] Has the scientific age of the Earth moved beyond the threshold of being questionable to being self-evident and unchallengeable? Both McLarty and Ford give the impression that this is the case.

Science is rightly proud of its willingness to challenge and even overturn its current orthodoxy. This even includes the possibility of challenging its underlying philosophical, even implicitly theological, if I may dare to say it, presuppositions. The most important implicitly theological presupposition in science that needs to be challenged is methodological naturalism and whether the histories projected by science using methodological naturalism correspond to the actual history of this world.[5] Thus, in spite of what both McLarty and Ford may imply, there is nothing wrong with challenging the current scientific orthodoxy with regards to the age of the Earth. When pressed, I am almost certain that McLarty and Ford would concur.

So, if the current scientific orthodoxy can be challenged, what about the current Adventist orthodoxy? The situation is not identical to scientific orthodoxy, because Adventists hold that the canonical Scriptures are the inspired word of God and that these Scriptures form the foundation for our belief. As the preamble to our Fundamental Beliefs clearly states, “Seventh-day Adventists accept the Bible as their only creed.”[6] However, the preamble goes on to say that revision of the Fundamental Beliefs is possible when the Holy Spirit leads our church to a fuller understanding of biblical truth. We can progress in our understanding of biblical truth, which is an exciting prospect for lifelong students of truth like McLarty, Ford and myself. This is not suggesting that objective biblical truth changes, but rather that our understanding of that objective biblical truth can become deeper and clearer.

Certainly, from my perspective, I have not put forward my article “Our Miraculous Planet Earth” as the redefinition of the Adventist orthodoxy on the age of the Earth. It would be presumptuous of me to do so. I simply was familiar with one of the mainstream Adventist creationist positions, which is that the Earth was created well before the Creation week got underway and that the first day of the week began when Jesus partially parted the clouds for that well-known hypothetical observer to get a squint at the sun. I decided to examine the biblical text more closely, and was amazed at what I discovered. Like Peter and John, I wanted to share what I believed that God had led me to discover through my biblical exegesis. If you grab a copy of the printed version of my Ministry article, you will find that the editors invite readers to tell them what they think of the article. This demonstrates that the editorial team are also open to constructive and even critical feedback and do not see my article as redefining the Adventist orthodoxy on the age of the Earth either.

I certainly realize that my discovery will challenge many Adventists like McLarty who see no moral problem with integrating a deep age for the Earth into their position on origins. However, I would recommend that McLarty and his deep-time Adventist associates take Gamaliel’s approach to my article.

While it has become clear to me personally that there is no passive gap that historically extends beyond the Creation week in the text of Genesis 1 and that there are substantial exegetical and logical reasons to hold that our planet Earth was created ex nihilo at the commencement of the Creation week, if this is not objectively and biblically true—if it is not of God—then it will fall on the exegetical heap. However, if my exegetical conclusion is objectively and biblically true—if it is of God—then it will stand, and the illumination of the Holy Spirit can lead our Seventh-day Adventist church family to grasp this biblical truth as well. As Isaiah prophetically pointed out, “The grass withers, the flower fades, but the word of our God will stand forever.”[7]

McLarty has no reason to fear or be despondent regarding my article. The word of God will ultimately stand.

Sven Östring is the Director for Church Planting in the North New South Wales Conference and has had a lifelong interest in Christian apologetics and the relationship between Christianity and science. He completed a PhD in computer networking from the University of Canterbury in New Zealand and was a research fellow in the Computer Laboratory at the University of Cambridge. He is one of the executive producers and presenters for the I Am series.