Reflections on the AT1 Gathering

Over 200 people from 15 states, two Canadian territories and as far away as Guam and Kuala Lumpur, Malaysia, attended the inaugural AT1 gathering held last weekend in Portland, Oregon.

About a year in the planning, the event kicked off Friday evening, October 4, at the Embassy Suites hotel in the Washington Square area of Portland.

From the get-go, the event had been introduced as a lay-organized time and place to help write a positive, progressive new page of the Adventist narrative. The goal was for the event to be free from the policy squabbles that can threaten to rob even the most positive Christian of happiness. 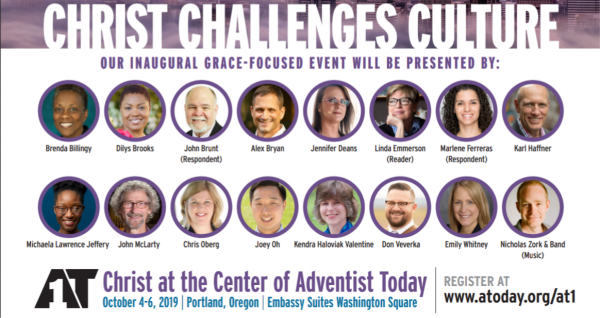 The result was a genuinely joy-filled, grace-centered time to fellowship with fellow believers and think carefully about Christ’s challenge to his followers in today’s society. The 13 speakers did not shy away from tough topics. Lust, anger, money, grief, love and fear were just some of the subjects that presenters tackled.

(Click on the following links for AT1 reports complete with pictures, speaker quotes and other tidbits for Friday, October 4; Saturday, October 5 and Sunday, October 6.)

“I’m impressed,” said Eddie Dugaduga, originally from Hawaii, on Day 2 of the event. He described the presentations as “Christ-centered” and said that he appreciated the topics addressed by the speakers. He called the talks “profound,” adding that he had been blessed by the gathering.

“We are not here to talk about policy,” said Suzann Rose, from California, summing up the AT1 vibe as “real.”

Rose also said that she liked “the focus on the people around us.”

AT1 was a place for Adventists and their friends to speak openly about timely issues without having to worry about many of the issues and restrictions that come with events organized by the bureaucracy of the denomination. Some attendees said that, unlike many other conferences, they felt that their presence was both appreciated and acknowledged at the AT1 gathering.

Adding to the flavor of the event were several organizations with booths with which attendees could engage during session breaks. These included Kinship, a longstanding organization that describes its mission as seeking to provide a “safe spiritual and social community to lesbian, gay, bisexual, transgender, and intersex current and former Seventh-day Adventists, their families, and those who support them.”

In addition, fairly new organizations brought some variety to the vendor area. One of these was CoLab which calls itself as “a movement designed to foster connection between established business leaders and aspiring entrepreneurs looking to make a difference in their field.”

The vendor area was carefully curated by organizers to help everyone at the gathering apply the concepts being shared by speakers over the weekend as true “doers of the word, not hearers only” (James 1:22).

As AT1 concluded after communion at noon on Sunday, October 6, many attendees lingered to talk about the event, the ideas shared and the future of the gathering. Many expressed excitement about the future of this new oasis of grace and real conversation in the Adventist community. There seemed to be a shared sense that while the inaugural AT1 weekend had been a success, this was only the beginning of the story for this positive, progressive, Christ-focused gathering.

All photos courtesy of Delwin Finch.

Is Red Meat No Longer a Dietary Problem? News Briefs for October 10, 2019