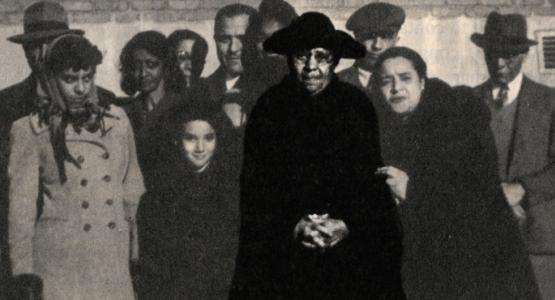 15 December 2021 | In 1943, Lucy Byard, an Adventist woman, was denied care from the Washington Sanitarium (now Washington Adventist Hospital) because she was African American.

This incident “forced our organization, and the Seventh-day Adventist Church, to confront the racism and prejudice that was present in our practice at that time,” said Terry Forde, president of the health system Adventist HealthCare, in a Visitor magazine article. Washington Adventist Hospital is part of Adventist HealthCare.

Adventist HealthCare and the White Oak Medical Center, a new health care facility that is an outgrowth of the old Washington Sanitarium/Washington Adventist Hospital, organized a Lucy Byard Recognition Event on Dec. 10, 2021, according to a Facebook post by Ted Wilson, president of the General Conference of Seventh-day Adventists (GC).

“I participated in a very important event that helped to bring about a correcting of a very sad chapter in the church almost 80 years ago at the Washington Sanitarium,” said Wilson.

As part of the event, new scholarships for African-American nursing students to assist in providing healthcare to all people were announced.

Byard became an Adventist in 1902, at the age of 25, after she discovered the church in New York, New York,  according to a Columbia Union Conference article written by Benjamin Baker.

Byard’s step-granddaughter, Naomi R. Allen, wrote that Byard was “one of five black women who pioneered the work in New York City. All her life she worked untiringly to build up the church.”

In the summer of 1943, Byard, by then in her mid-sixties, developed liver cancer with a chronic case of cachexia, or the “wasting syndrome.”

James Byard, her second husband, said he “was suddenly deeply impressed to send her to Washington Sanitarium in Takoma Park, Maryland [United States], of which place, I was not referred to by anyone.”

Prior to 1943, Blacks had been treated at the Sanitarium, but on a limited, selective and subpar basis; only a certain kind of Black person would be admitted in emergency cases and the patient had to be treated “in an inconspicuous way” in the basement of the Sanitarium by off-duty hospital staff.

By 1943 the policy had changed: no Blacks were to be admitted to the Washington Sanitarium. However, the Byards and those helping them make a reservation at the hospital were unaware of the change.

James described to G. E. Peters, secretary of the North American Colored Department, what happened in a letter:

“We, after much effort, arrived in Washington by rail and went directly to the [Washington Adventist] Sanitarium. …The attendant acknowledged my reservation, went out and spoke to my wife and proceeded upstairs. He returned shortly and called me into the office, and told me that he regretted to say this, but it was against the law of the State of Maryland to admit colored people into the Sanitarium.

“…I warned the attendant of my wife’s condition, and reminded him that she needed immediate attention; also that I was not acquainted with any hospital in Washington, D.C., hoping that he might examine her and find out her critical state, but to no avail.”

Thirty-eight days after being denied equal treatment at the Sanitarium, Lucy Byard died at Freedman’s Hospital, Oct. 30, 1943. The immediate cause of death, as listed on her death certificate, was liver cancer with a resulting cachexia.

Robert Hare, then medical director of Washington Sanitarium, said in a letter to W. E. Nelson, the GC treasurer and chair of the Washington Sanitarium Board: “I cannot feel that the Sanitarium should be called upon to carry a mixed clientele. … I would just as willingly minister to the needs of a colored patient as anyone else, but mentally, emotionally, and in certain physiological respects they differ from the white, and I do not favor mixing them.”

Nelson responded: “The psychology of these black people is so different from the white that it would be impossible for us to mix them. … As I view the whole situation, Dr. Hare, it is not a matter of the colored people wanting a little sanitarium of their own where they can receive attention, but what they want is racial and social equality.”

Byard’s ill treatment at Washington Sanitarium—and the response of church leadership to the incident—became a matter for the entire Adventist community to confront, wrote Forde.

“It was the Byard affair of late 1943 that served as the primary catalyst to bring about needed change in the church,” said Calvin Rock, former GC vice president, retired chair and president of Oakwood University (Alabama) and retired chair of what is now Loma Linda University Health (California), in his book, Protest and Progress.

What happened to Lucy Byard “was a reprehensible action and should never have happened since as Christians we are to serve and treat people with respect, dignity, love, and care as Jesus did,” said Wilson.

To watch a video about Lucy Byard by Benjamin Baker, click here.