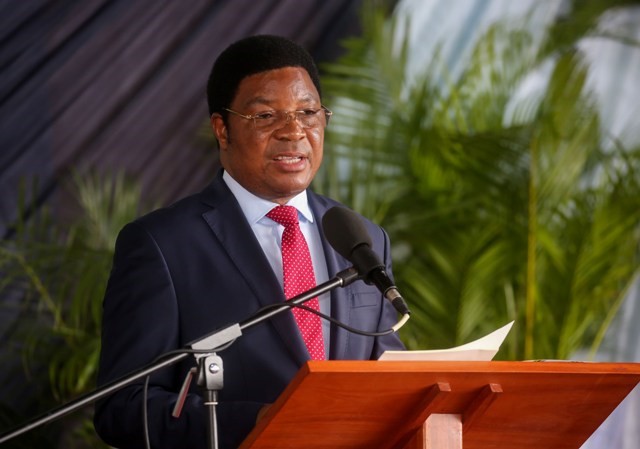 By Tysan, 15 May 2019 | The Hon. Kassim Majaliwa, Prime Minister of Tanzania, spoke on Sabbath (11 May) at the Magomeni Seventh-day Adventist Church during a 100th Anniversary celebration for the denomination’s Family Ministries Department.

“My visit to worship with you in an Adventist church is proof that our government will continue cooperation with all religions in our nation to enhance peace and unity,” Majaliwa told the congregation. Reading from Job 22:21, “Agree with God and be at peace; in this way good will come to you.” He added that “the government will continue depending on God in bringing development to Tanzanians.”

The Prime Minister also endorsed a book entitled Family Hope which the denomination is distributing widely. “I congratulate the Adventist Church in preparation of this book,” he said. “This book will help us teach the best ideas to build strong families. It should not only be read by Adventists, but also Muslims and Christians of other denominations. A strong nation depends on strong families.”

Majaliwa said the government understands the Adventist contribution to Tanzania includes not only preaching the Word of God, but also health services, education and disaster relief for all citizens without discrimination. He also mentioned Adventist media ministries Morningstar Radio FM station, Adventist World Radio and Hope Channel Tanzania “which educate people in their current and future lives.”

The Magomeni Church is erecting a new facility and Majaliwa said, “I am encouraged to see you building a very big and beautiful church. Tanzanians can do big things without depending on foreign sponsorship.” He donated 300 bags of cement and one million Tanzanian shillings toward the construction project. “Keep on educating your members to give tithes and offerings and paying taxes to expand the work of God and also to support the development of our nation,” he added.

Pastor Mark Walwa Marekana, president of the Southern Tanzania Union Mission (STUM), told the congregation, “God made marriage to be a happy thing, full of love and understanding, though the devil has messed up things and brought problems to married couples. The Adventist Church decided to have a family ministries department to help restore families to God’s intentions for marriage. Your wife was created to help you. Your wife differing with you in reasoning is not a problem; the problem is you not helping her and the two of you moving forward together.”

Dr. Robson Nkoko, executive secretary of STUM, reported on the work of the Adventist Development and Relief Agency (ADRA) Tanzania branch. “In 2018, ADRA funded 204.77 million Tanzania shillings in aid to 18,332 people in the Nyarugusu Refugee Camp forced to flee from flooding in Meru Arusha, Albinos and other areas.”

Magomeni Church is one of the oldest Adventist churches in the city of Dar es Salaam. It is believed to be the mother church to all the other Adventist congregations in the city.

This is the second time in recent years that a top government leader has visited Magomeni Church. In 2017, President John Pombe Magufuli spoke at the church and made a donation to the building project. Majaliwa is the fifth prime minister to serve under President Magufuli.

Tysan is a reporter for Adventist Today based in Tanzania. The photo is of Prime Minister Kassim Majaliwa speaking on Sabbath, 11 May 2019, at Magomeni Seventh-day Adventist Church in Dar es Salaam, Tanzania.