The tragic murder of Ermias Joseph Asghedom, popularly known as Nipsey Hussle, on March 31 of this year sent shockwaves through the hip hop, African American, and African diaspora communities, as well as Nipsey’s hometown of Los Angeles, California. Nipsey had gained some renown as a gangster rapper, but had matured into a community activist and entrepreneur, establishing businesses in impoverished areas of South Central and employing residents of the community, while lending his celebrity and time to schools and education programs on the ills of gang culture and the promotion of STEM learning. In fact, Nipsey had taken the initiative to schedule a meeting with the Los Angeles Police Department for April 1 on how to prevent gang violence in South Central LA. A bullet prevented that meeting from taking place.

Nipsey’s death has raised complicated questions about his life, legacy, and memory. How to reconcile the young black man that attained fame from boasting about murder, drug dealing, gang violence, and misogynistic relationships with women, with the brilliant, measured, enterprising black man with a heart to give back and better his ‘hood? Would the latter have even been known and acknowledged without the platform that the former allowed him? Will Nipsey’s legacy, which will be accessed on YouTube and other social media platforms, consist of his early videos that promote nihilism, or his enlightened and enlightening interviews on black empowerment and community uplift? It seems impossible for society to juggle or reconcile both.

Adventist social media—individual Adventists on social media, that is—was saturated with odes and RIPs to Nipsey. Some even posted the inexplicable trope, “He’s in a better place now” (this brief essay cannot go into Adventist’s views on the state of the dead on social media). I am intrigued as to how Adventists will view Nipsey’s legacy, but here want to explore perhaps an unorthodox take on how black Adventists would have viewed Nipsey Hussle had they encountered him in the 1930s. 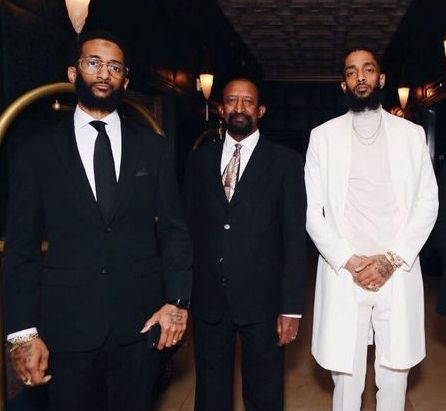 Nipsey was born to an African American mother, Angelique Smith, and an Eritrean-born father named Dawit Asghedom, who emigrated to the United States years before Nipsey’s birth. Although Eritrea was established as a nation in 1890, the sliver of land in East-Central Africa that borders the Red Sea was historically a part of the Kingdom of Aksum or Abyssinia, modern-day Ethiopia. The Eritreans and Ethiopian people are one and the same; Eritrea, like almost all other African nations, is a political construct courtesy of Europe.

African Americans have always had a love relationship with Ethiopia, primarily because of its prominent place in the Bible and its rich Christian history. Ethiopia is one of the first places mentioned in the Bible in the creation account in Genesis 2:13. Perhaps the most storied text on the kingdom is David’s prophecy in Psalm 68:31: “Princes shall come out of Egypt; Ethiopia shall soon stretch out her hands unto God.” And then, of course, there is the Ethiopian chief financial officer (Acts 8:26-40), the first high official to accept Jesus Christ and be baptized. This politician took his newfound faith back to the kingdom and Christianity flourished throughout the realm. Ethiopia in 331 CE made the Orthodox (Christian) Church its national religion.

Ethiopia has always been particularly special for black Seventh-day Adventists, for this reason. When Christianity became the national religion of Ethiopia, Christianity also became the ascendant religion of the Roman Empire during Constantine’s reign. In Rome reverence of the seventh-day Sabbath was phased out in place of Sunday. Yet the Christian church in Ethiopia continued to observe Saturday in accordance with the Scriptures. The subsequent epochs that saw the founding, rise, and spread of Islam, and the descent of Europe into the Dark Ages, effectively isolated Ethiopia from European Christianity.

Ellen G. White in The Great Controversy speaks at length on the faithfulness of these Ethiopian Christians:

“In lands beyond the jurisdiction of Rome, there existed for many centuries bodies of Christians who remained almost wholly free from papal corruption. They were surrounded by heathenism, and in the lapse of ages were affected by its errors; but they continued to regard the Bible as the only rule of faith, and adhered to many of its truths. These Christians believed in the perpetuity of the law of God, and observed the Sabbath of the fourth commandment. Churches that held to this faith and practice existed in Central Africa and among the Armenians of Asia.” (63)

“The history of the churches of Ethiopia and Abyssinia is especially significant. Amid the gloom of the Dark Ages, the Christians of Central Africa were lost sight of and forgotten by the world, and for many centuries they enjoyed freedom in the exercise of their faith. But at last Rome learned of their existence, and the emperor of Abyssinia was soon beguiled into an acknowledgment of the pope as the vicar of Christ. Other concessions followed. An edict was issued forbidding the observance of the Sabbath under the severest penalties. But papal tyranny soon became a yoke so galling that the Abyssinians determined to break it from their necks. After a terrible struggle, the Romanists were banished from their dominions, and the ancient faith was restored. The churches rejoiced in their freedom, and they never forgot the lesson they had learned concerning the deception, the fanaticism, and the despotic power of Rome. Within their solitary realm they were content to remain, unknown to the rest of Christendom.

“The churches of Africa held the Sabbath as it was held by the papal church before her complete apostasy. While they kept the seventh day in obedience to the commandment of God, they abstained from labor on the Sunday in conformity to the custom of the church. Upon obtaining supreme power, Rome had trampled upon the Sabbath of God to exalt her own; but the churches of Africa, hidden for nearly a thousand years, did not share in this apostasy. When brought under the sway of Rome, they were forced to set aside the true and exalt the false Sabbath; but no sooner had they regained their independence than they returned to obedience to the fourth commandment.” (577)

Yes, while Europe as a whole was in darkness, an entire African empire was steadfast to God’s holy day. Contact with Rome did not lead to the Ethiopians receiving Christianity or greater light, but to a corruption of their Christian purity. Once the Roman influence was overthrown, they reverted to keeping the fourth commandment. This certainly turns on its head the notion of Africa as a “Dark Continent.” 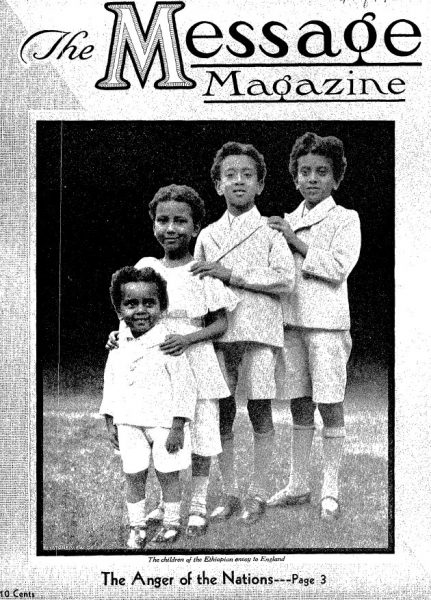 Black Seventh-day Adventists have always known of and revered Ethiopia’s Christian history. They see themselves as part of a long, unbroken line of black Sabbathkeepers leading directly to the Ethiopian CFO. In the pages of Message, a periodical produced by black Adventists with the distinction of being the oldest black Christian magazine, this knowledge came front and center with developments on the African continent in the mid to late 1930s and early ‘40s.

First, a little bit of history is in order. From December 1894 to October 1896 the Italians and Ethiopians fought what is known as the First Italo-Ethiopian War. Italy wanted to subdue the proud African nation, which had never been colonized by a European power, and make it one of its imperial territories. However, the Ethiopians simply were not having it. They bested the Italians in the decisive battle of the war at Adwa on March 1, 1896. Ethiopia would remain independent.

Forty years later, Italy again tried to annex Ethiopia. Ignoring the League of Nations rules of engagement and other treaties, Italian prime minister Benito Mussolini ordered his forces to invade Ethiopia in late 1935, and successfully occupied the nation, taking the capital of Addis Ababa on May 5 of the next year. An exiled Haile Selassie, emperor of Ethiopia, appealed to the League of Nations for succor, but in vain. The Second Italo-Ethiopian War is cited as a catalyst for World War II.

Meanwhile in the United States, blacks were rooting for Ethiopia’s resumption of power of its own realm. Specifically, black Adventists were watching with vested interest, as they saw the conflict as white Roman Catholics taking away the freedom (and religious freedom) of black Sabbathkeepers. There was also the fact that Haile Selassie had been extremely kind to the Seventh-day Adventist Church in Ethiopia, and Adventism had grown immensely during his reign

Message authors saw the Second Italo-Ethiopian War as a prelude to a world war and the onset of Armageddon, and faithfully kept their readers abreast of the developments of the conflict. Throughout the coverage black Adventist luminaries such as Owen A. Troy Sr., Eva B. Dykes, A. Wellington Clarke, J.G. Dasent, C.E. Moseley, and O.B. Edwards assured Message readers with Bible prophecies and Ethiopia’s illustrious past victories over the Roman Empire that Ethiopia would prevail against Rome.

Haile Selassie returned from his exile to Ethiopia on January 18, 1941. By May the Ethiopian army and its allies had effectively expelled the Italians from Ethiopia. Ethiopia was free! Exultant black Adventists wrote in Message that this victory over Rome and its forces typified the eventual defeat of black Sabbathkeepers over the power of Rome during the final conflict over the Mark of the Beast.

What would black Adventists of yesteryear make of Nipsey Hussle, with his complex legacy? For all of his trials and tribulations, they would no doubt see him, an Ethiopian, as a guarantee of the eventual triumph of God’s people over all the forces that oppress them.