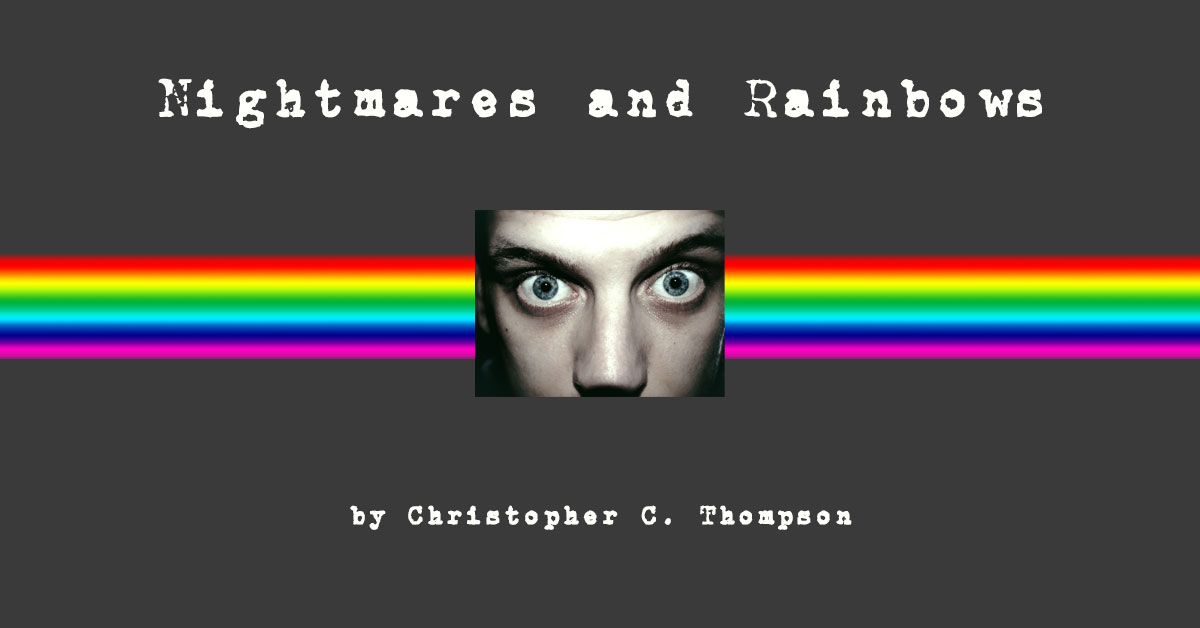 When I was a kid I used to have this really bad recurring dream. In the dream I was surrounded by these old school mobster-type characters who looked like the villains from a crazy Dick Tracy episode.

They were all cramped in a dark room with one lightbulb hanging from the ceiling. In the middle of this angry huddle of menacing faces was helpless little me. The problem was that the tempers in the room were beginning to flare.

I never quite understood whether or not they were yelling at me. I suppose they weren’t, but as a little kid when the adults around you are out of control it always seems like it’s directed toward you, even if it isn’t. But whether they were yelling at me or not, they were yelling. They never showed their weapons, but they were all armed. I was helpless sitting in that room, and becoming increasingly frightened with the sense of imminent danger pressing me on every side.

Each time they raised their voices in anger I felt a greater sense of danger. I knew that at any moment their angry words would turn into violent action. Louder and louder they screamed, and I knew I would either be the target or I would get caught in the crossfire. Then suddenly I’d wake up. I’d generally be breathing heavily from and needing to gather myself with this strong sense of a close call and a near-miss.

I’d get up and go to the bathroom or get some water. There may have been once or twice that I went to tell my mom that I had had a very bad dream. But I had that dream so often that it almost became commonplace although never less frightening. Each time I knew it would end in bloodshed. Each time I managed to wake-up unscathed.

I had that dream with the screaming mobsters a lot. It terrified me. I’d wake up physically shaking with fear. I’d somehow manage to gather myself. Then, somehow I’d manage to go back to sleep. The next morning I’d wake up amazed that I didn’t die. That might sound like it’s a joke. It is not a joke. I have a theory about why I had that dream. Email me and I’ll tell you what I think. Here’s the miracle. I didn’t die! Not only did I not die, but those mobsters never laid a finger on me. I know that they were mean, dangerous and bent on evil, but they could not harm me.

When we look at the world around us it seems like a terrible nightmare. There is still a fire raging in California. School shootings are a mainstay of the regular newscycle. World economic leaders are scrambling to reposition themselves and stockpile the resources to ensure their solvency in the difficult days ahead. Refugees flee their countries without end trying to find solace on peaceful shores only to be castigated, alienated and separated from their children. It’s become a common occurrence to see news of yet another member of the president’s administration get indicted for any number of crimes. Materialism, addiction, broken relationships and callousness, hatred and strife are commonplace. Black lives matter! Blue lives matter! All lives matter!!! Build the wall! Me too! Lock her up! No Justice; No peace! The voices are getting louder and louder. I feel like the violence is going to erupt at any moment.

I moved to central Florida a little over a year ago. It rains a lot here. Often times it seems like it rains every day. Here’s the thing it hardly ever rains long. Sometimes there are fierce storms that arise real quick. The skies unleash what seems like endless torrential rain. Just tonight I watched a very frightening lightning display on my way home from the store. As I neared home I was afraid that the lightning seemed terribly close to my house. I saw the lightning strike and I was certain I had seen an explosion very close by. My son was terrified. He’s consumed with this idea that we’re could get struck by lightning. It rained. Then it stopped. All was quiet. No one died.

Florida is a weird place. It often rains while the sun is still shining. It will sometimes rain right across the street from where you’re standing. Because it rains so often here we see a lot of rainbows. I was walking with my family one day and saw a double rainbow. It was as bright as can be. A bright beautiful rainbow reaching across the horizon. Then above and beyond it, a second rainbow; not quite as bright, but stretching still farther.

We know that the rainbow has always been God’s perpetual, natural promise of grace, providence and protection (see Gen. 9:13-16). It is the divine reminder that God’s love is greater than God’s wrath and God’s grace is greater than God’s fury. It is also proof that the wickedness of men will never eclipse the providence and protection of God. They may scream as loud as they want, disaster may be imminent, but God’s protection is sure. “A thousand may fall at your side, And ten thousand at your right hand; But it shall not come near you” (Ps. 91:7 NKJV).

That promise is so good. We cheat ourselves not to get the previous parts.

Surely He shall deliver you from the snare of the fowler

And from the perilous pestilence.
He shall cover you with His feathers,
And under His wings you shall take refuge;
His truth shall be your shield and buckler.
You shall not be afraid of the terror by night,
Nor of the arrow that flies by day,
Nor of the pestilence that walks in darkness,
Nor of the destruction that lays waste at noonday
(Ps. 91:3-6 NKJV).

The promise assures us that God covers us from every source of potential danger. When we lie down to sleep at night there are terrors that seek to steal our peace, but God’s providence and protection covers us at all times. When we go about our duties during the day there are storms all about, but God ensures that we make it safe to our destination. “The righteous person faces many troubles, but the Lord comes to the rescue each time.” (Ps. 34:19 NLT)

I’m still amazed that I woke up safe each time I had that dream. Yet, with every nightmare I have ever had the Lord has promised to protect me, and the proof is evident that I did not die. He kept me despite my fear. God covers us and keeps despite the circumstances. And God is faithful. There is no end to divine providence and protection. And in the morning, when the eternal Son shall shine, we will find that God kept us through all of the perilous nights; and we will live in the bright and everlasting light of the love of God. Sweet dreams. See you in the morning.