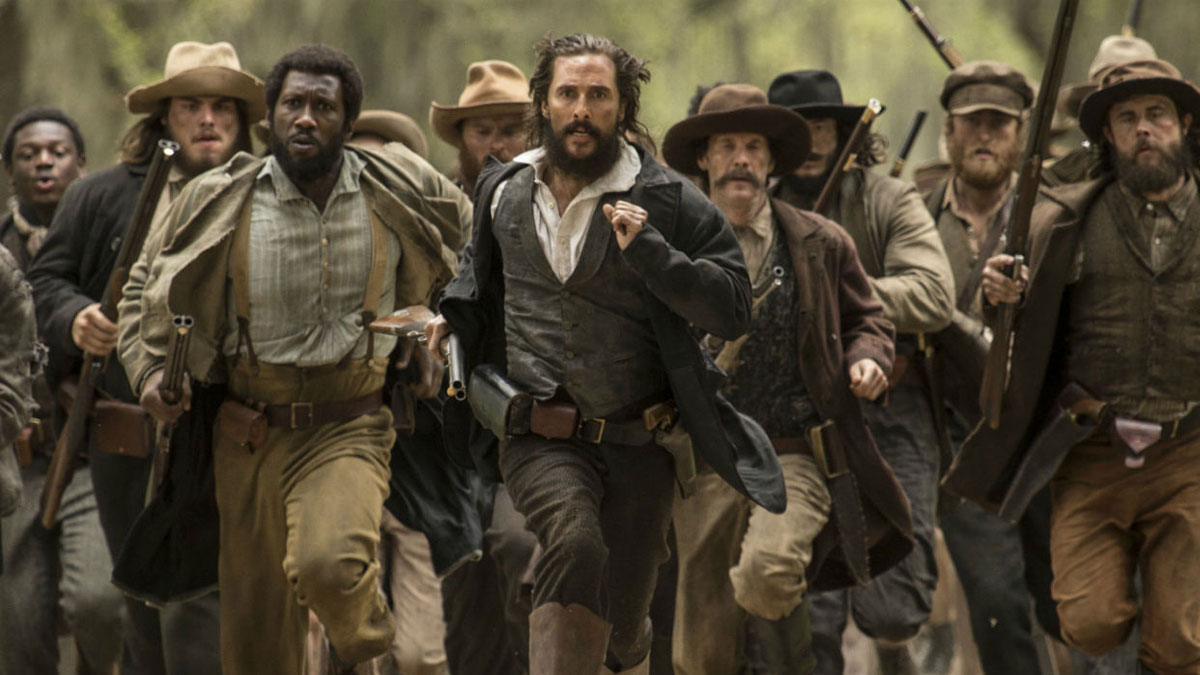 By Jiggs Gallagher, July 26, 2016:    Free State of Jones tells a story unknown to most Americans, and I daresay most Adventists. It’s a compelling narrative of racial conflict, the drama, desperation and cruel senselessness of war, and the complexity of ordinary people’s lives even after the shooting stops.

It tells the tale of one Newton Knight, a small, white farmer in southeastern Mississippi (Jones County, specifically—hence the film’s title). His story is portrayed by Matthew McConaughey, currently of the Lincoln television commercials’ fame. The connection to the Adventist faith is that Knight’s real-life daughter Anna, a biracial woman born considerably after the end of the Civil War, became a Seventh-day Adventist during the latter part of the 19th century. She also returned to Mississippi and began a school for African American children there, along with a number of other accomplishments in education and health care.

None of that narrative is included in the film. In fact, the story jumps back and forth between Newton’s Civil War and post-Civil War life, and the story of his great-grandson, David Knight, who is on trial for violating Mississippi’s segregation laws around the year 1950 by attempting to marry a white woman. As a person who is one-eighth black, he is considered “black,” and in violation of the state’s Jim Crow laws.

The first thing that jumps out to the viewer is that however sympathetic a character Newton Knight appears, this is Hollywood storytelling—a fictional script “based on” historical reality. Knight is a Confederate soldier, facing the perils of war, and one of his relatives, a young boy, shows up with his unit as a raw recruit just before a battle. The boy is killed during the fire fight, and Newton carries his corpse back to his mother on horseback. A fellow soldier tells Newton that the boy died “with honor.” “No,” Newton replies, “He just died.” He makes a decision then and there that, as a poor white farmer conscripted to defend the Confederacy on behalf of rich slave-owners, he is not happy with his lot. He deserts.

Newton returns to his wife and son at the farm, and tries to avoid being captured as a deserter. His son becomes critically ill, and in the absence of a local doctor, he is referred to Rachel, a slave girl, a sort of naturopathic healer, who visits their home. Applying remedies, Rachel breaks the boy’s fever and turns to leave, to return to her master on the plantation. Newton goes out of the house with her, and presses her to take some payment, which she is reluctant to accept. The viewer senses that, later, this will become a love affair. (In reality, such relationships did occur later in Newton’s life.)

The Confederate authorities close in on the Knights, and soon Newton must flee to a nearby, dense and dangerous swamp. He accumulates, Robin Hood-style, a not-so-merry band of runaway slaves and disaffected white soldiers. Their ranks grow, and most of the film concerns their rebellion against the Confederate Army.

Rachel runs away from her plantation and joins the band, all of them living in the swamp and evading the authorities, who grow more eager to capture and punish them. Meanwhile, Newton grows more sympathetic to the plight of the black slaves. A trained blacksmith, Newton removes an ugly and painful iron collar one runaway slave had around his neck.

Eventually, the swamp band are cornered by the army, and a battle ensues. After much fighting, they defeat the Confederates, and Newton executes the top officer in bloody fashion. He makes a speech to his rag-tag force, saying that if they are now in control of about three counties in southeast Mississippi, they should proclaim the “Free State of Jones,” where four principles will govern them: (1) No man should stay poor so other men can be rich. (2) They will live and die as free men and women. (3) What you put into the ground is yours. And (4), every man is a man. (“It’s as simple as that.”)

They try to get messages to Union Army General William Tecumseh Sherman to help arm them and support the resistance. Sherman refuses.

After more struggle, eventually the war ends in April 1865. Emancipation of the slaves is declared, and the men return to their farms. But all is not well—white resistance is rampant, and the national government’s commitment to Reconstruction, under new president and southerner Andrew Johnson, is weak. White plantation owners who take a loyalty oath to the Union have their lands restored, and tenant farming returns many blacks to their former slave owners, “free” in name only. We see the struggle for voting rights, the rise of the Ku Klux Klan, lynchings, torture, beatings, and the struggle to move on.

The film has the slow, languid pace of a Ken Burns PBS documentary—and that’s a good thing (from this viewer’s perspective). New scenes are introduced with black-and-white still photos of actual scenes of the war and its aftermath, reinforcing the movie’s documentary feel. The artful music score makes an emotional impact.

However, the script writers never deal with the moral conundrum of Knight’s decision to abandon his wife and child. He just takes up living with Rachel, and they have a son together after the war (this is part of the change from the true story—he actually had a daughter, Anna Knight, who became a Seventh-day Adventist in the later part of the century). Newton moves to a different part of the county to farm. After the war, his white wife and son come knocking, destitute; their home was torched. Newton and Rachel graciously accept them and put them in a small house on the property, and all five live in something like a Fundamentalist Mormon, polygamous arrangement. They don’t ever talk about the rightness or wrongness of their lot, just get up each morning and work the farm.

There is no self-analysis of Newton’s desertion either. It’s just a fact. My wife and I, when we see these plot constructions in films, call it “movie logic.” There’s usually a disconnect with scripts from the way such situations would play out in real life. After much back and forth between the 1860s and the 1950 trial of great-grandson David Knight, the trial’s resolution provides the film’s denouement.

Anna Knight’s actual story would make a similarly compelling movie. In 1894 she was accepted at Mount Vernon Academy, an Adventist secondary school in Ohio, and later graduated from Battle Creek College as a missionary nurse. She returned to Mississippi and started a school for black children.

Later Anna became an Adventist missionary to India, the first African American of any denomination to do so. After her service there, Adventist leaders asked her to work in Atlanta as a nurse, teacher and Bible instructor. She later served in the education department of the Southern Union Conference and helped to develop Oakwood University in Huntsville.

As storytelling, I found the film very satisfying. The film was not particularly a commercial success—it breezed in and out of most theaters quickly; this reviewer had to travel 75 miles to find one where it was still playing in late July. However, I believe it might become a cult classic in future years. It shines a light on a previously obscure story and brings the viewer along with a compelling narrative.

Jiggs Gallagher is a senior editor for Adventist Today based in Southern California. He worked for major newspapers, taught journalism at Union College, served as a communication officer for Adventist institutions and currently teaches journalism at California State College. Readers requested a review of the movie in response to a news story about its connection to the Adventist movement.