The Famous Johnny Barnes of Bermuda, an Adventist Believer, Is Buried 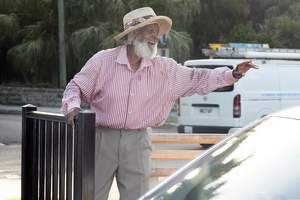 July 25, 2016:    Bermuda has bid farewell to John J. Barnes with a regal funeral in tribute to “Mr. Happy,” an ambassador for the island known worldwide, reported The Royal Gazette, the major newspaper in the island nation. Barnes was an active member of the Adventist faith. For decades, he spent a good part of each morning standing at a key intersection where a major road comes into Hamilton, the capital city, waving with an enthusiastic smile at all who drove by.

The funeral was held last week (July 19) in the auditorium at Bermuda Institute, the Adventist school. Participants included Prime Minister Michael Dunkley and Governor George Fergusson, the representative of Queen Elizabeth II. Bermuda is an overseas territory of the United Kingdom in the Atlantic Ocean about 850 miles east of the United States.

Barnes was 93. Governor Fergusson told “how he, like tens of thousands of others, experienced the ‘lifting of the spirits that came with Mr. Barnes’s cheery, no-strings early morning greetings,’” the newspaper reported. Barnes did not seek “fame, wealth or pushing a cause, other than the Christian message of love thy neighbor,” the Governor said.

Dunkley spoke of encounter Barnes for the first time during a morning run three decades ago. He thanked the family for giving Bermuda an ambassador, although it does not officially have a diplomatic corps. He called Barnes a “remarkable and original man who impacted the lives of many, in ways that we are still coming to understand,” according to the newspaper.

Pastor Randolph Wilson of the Saint Davids Seventh-day Adventist Church stated that there were those “who visited Bermuda simply to see Mr. Barnes and share his compassion.” Pastor Kenneth Manders, president of the denomination’s Bermuda Conference, got a verbal affirmation from the hundreds in attendance at the funeral when he proposed that East Broadway, where Barnes characteristically stood waving at passing vehicles, be changed to Johnny Barnes Way.

Crowds gathered along the road as the automobile procession went to the cemetery at the Saint George’s Seventh-day Adventist Church. Barnes was buried in a plot overlooking the ocean, according to the newspaper.

Barnes died July 9 with his wife of 65 years, Belvina, at his bedside. A nursing assistant awakened Mrs. Barnes at 2:45 am that day and she sat with Mr. Barnes “as he moved his lips in words of love and took his last breath at 5:51 am,” the newspaper quoted the nurse.

About five percent of the total population in Bermuda are Adventists. That makes it the largest proportionate Adventist share of any country in the denomination’s North American Division, as well as one of the largest religions in Bermuda.

The featured photo shows Barnes as almost all visitors to Bermuda remember him, standing at his usual post greeting all who passed by. He was as well known as any person in the small island country.