NAD Responds to Prophecy of Nuclear Bomb on Nashville 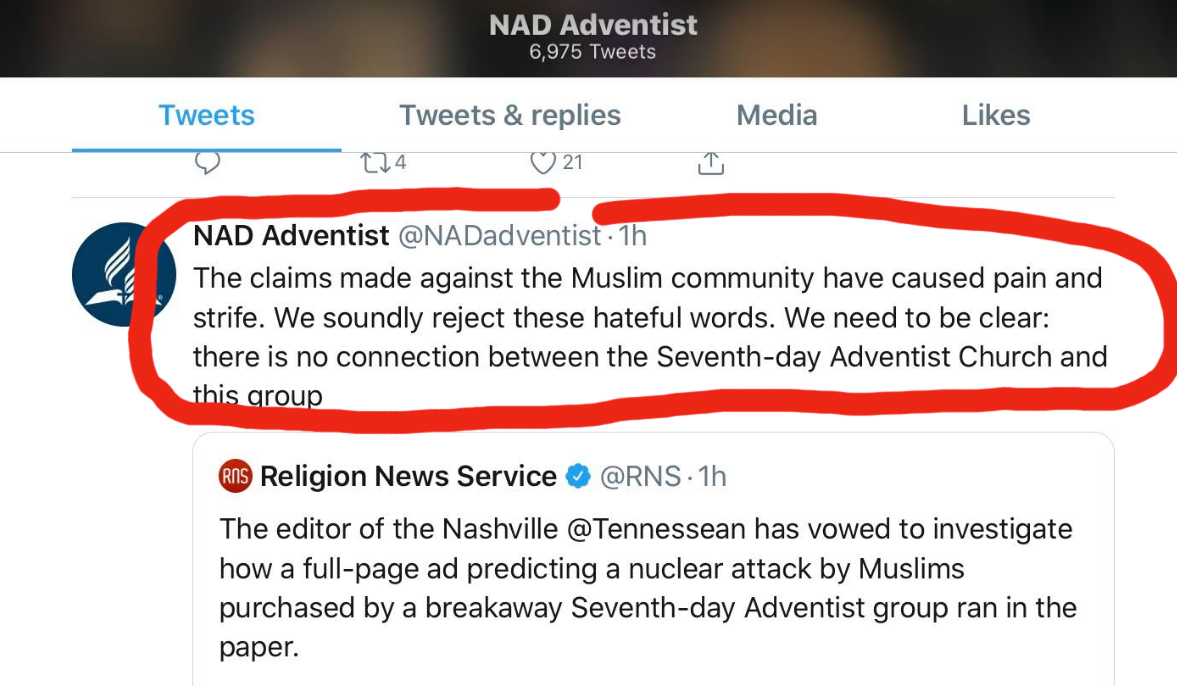 “We are deeply disturbed by the hurtful ad published by @Tennessean,” says the tweet, posted around 8AM Eastern time. “The claims made against the Muslim community have caused pain and strife. We soundly reject these hateful words. We need to be clear: there is no connection between the Seventh-day Adventist Church and this group.”

Around 11AM Eastern time a second tweet was posted that matched the first, except without the accusatory first line.

“One of the Adventist Church’s Fundamental Beliefs states, ‘In Christ we are a new creation; distinctions of race, culture, learning, and nationality, and differences between high and low, rich and poor, male and female, must not be divisive among us. We are all equal in Christ, who by one Spirit has bonded us into one fellowship with Him and with one another; we are to serve and be served without partiality or reservation’ (Fundamental Belief 14, Unity in the Body of Christ).

This statement, like the tweets, fails to acknowledge that the Tennessean had already removed the ad and denounced it.

Are These Disclaimers Accurate?

The NAD claim that the group has “no connection” to the Seventh-day Adventist Church is open to refutation. The main spokesman for the Nashville atomic bomb prophecy, Jeff Pippenger, is an ex-Adventist, and his audience is Seventh-day Adventists. His claim is based on a dream of Adventist founder and prophet Ellen White, found in Manuscript 188, 1905: “When I was at Nashville, I had been speaking to the people, and in the night season, there was an immense ball of fire that came right from heaven and settled in Nashville. There were flames going out like arrows from that ball; houses were being consumed; houses were tottering and falling.” Though the setting of the date of July 18 for this to happen is based on erroneous prophetic interpretations, it resembles methodology used by Adventists since the pioneer days to attempt to predict the nearness of Jesus’ return and other end-time events.

While the church should be upset that Pippenger’s advertisement offended Muslims, this is by no means the first time that Seventh-day Adventists have singled out other religious groups hurtfully. Ellen White accused the Roman Catholics and the Pope, using words like “antichrist,” “the beast,” and “the whore of Babylon,” and charged the Roman Catholic Church with being in alliance with Spiritualism in preparing to persecute Sabbath-keepers. These are still Adventist beliefs, regularly taught to new believers in evangelistic meetings and Bible studies, and spread through mass mailings of Ellen White’s The Great Controversy.