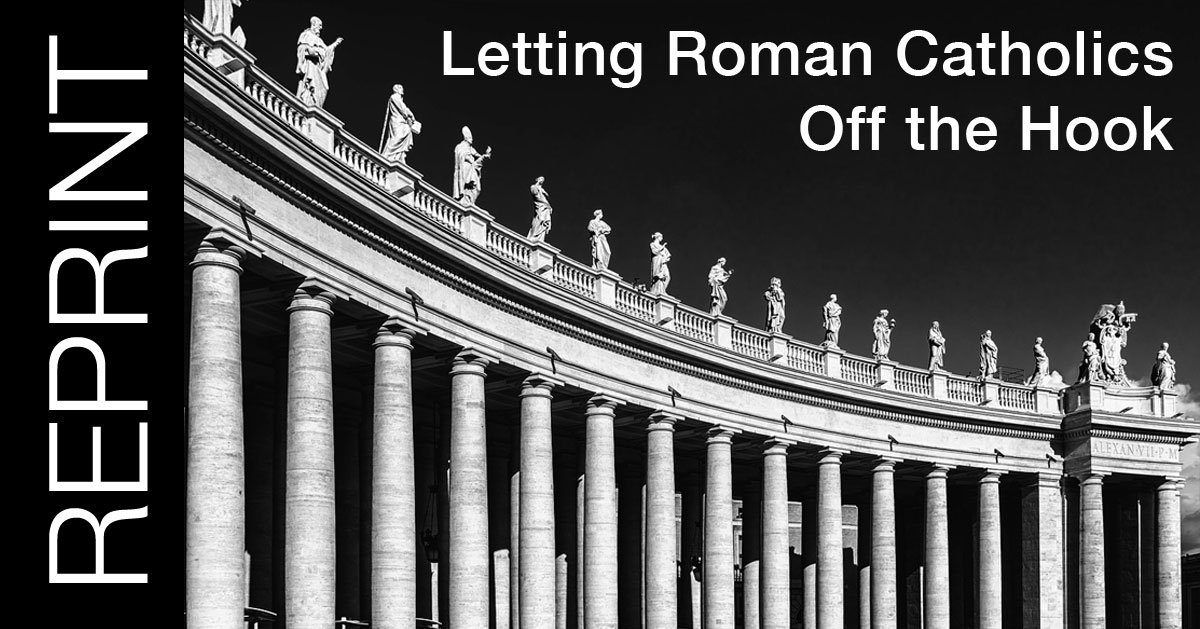 This article was originally printed in the Winter 2010 issue of Adventist Today.
By Loren Seibold

For over a century, even before the publication of The Great Controversy, we Adventists have regarded the Roman Catholic Church leadership, typified in the first beast of Revelation 13, as our arch-nemesis, our bête noire, the enemy that takes the evil part in the apocalyptic scenario against God’s remnant.

Here are seven reasons why it may be time to question them in that role.

1. More than a hundred years have passed since our prophet approved these prophetic applications. Ellen White expected Jesus to return long before this.1 We’re not sure why that hasn’t happened. But isn’t it possible that some details of the apocalyptic scenario set out in the 1890s may have changed by the 2010s? It happened to Israel. Not all of the original Old Testament prophecies about them and their role came to pass. We call it “conditional prophecy.”

2. Principles might be more diagnostic than players. That we oppose those who would legislate matters that should be left to an individual’s conscience is a principle I value, and I’m proud of Seventh-day Adventist efforts to protect religious liberty. But if it should happen that someone other than the Roman Catholic Church begins to act like the beast of Revelation 13, we will be more ready to respond if we are watching for a violation of the principle than if waiting for one specific group to offend.

3. Ellen White fingered Catholicism in a very different world. Historians have shown that 19th-century American anti-Catholicism grew out of a general anti-immigrant nativism.2 In an era when we have had and could again have a liberty-loving Roman Catholic president, when Catholic immigrants have become our young work force, why can’t we preach the gospel without identifying Roman Catholicism as Satan’s exclusive tool?

4. The Roman Catholic Church of today is a much different institution than it was during Ellen White’s time. The Second Ecumenical Council of the Vatican (1962-1965) radically altered that denomination’s theology and practices. Vatican II declared the gospel central to church theology, made worship accessible, denied that Roman Catholics only can be saved, encouraged lay Bible study, and affirmed religious liberty. While not quite a Protestant Reformation, today’s Catholic Church is not the same Catholic Church referenced in our 19th-century eschatological studies. Among other things, the Second Ecumenical Council weakened Vatican authority over world Catholics—as evidenced by the 78 percent of American Catholics who oppose their church’s ban on contraception.3

5. By focusing on Roman Catholicism, we may miss more dangerous anti-Christian opponents. Far more Christians have been killed, persecuted, or denied their religious liberty by Communism, military Fascism, and Islamist extremism in the past century than by Roman Catholics; we’ve let these pass with minimal comment (in the case of Naziism, even offering some pusillanimous cooperation) as we continued to warn against the pope. Today religious liberty still has more dangerous enemies than Catholicism–in the United States, perhaps even some of our fellow conservative Protestants.

6. God has given us time to become a world church, and that changes the cast of characters in our eschatology. The “antichrists”—opposers of Christ—to many of today’s world Christians are radical imams or cruel dictators. One site of Christian persecution right now is northern Nigeria, where Muslims burn churches and kill Christians.4 An eschatology that expects only Roman Catholics to initiate religious oppression, only in the United States, and only around the Sabbath question, may fail to speak prophetically should apocalyptic markers appear elsewhere.

7. Religious liberty has arguably improved in countries where Catholicism has influence. During my lifetime, the papacy has frequently been a force for peace and freedom. Pope John Paul II opened the first breach in the Iron Curtain, and Catholics have been more forthright in speaking against violence and oppression than many of our fellow conservative Protestants. Consider the irony that our evangelists are employing anti-Catholic teachings for soul winning in countries where the papacy helped win them that freedom! (And the even greater irony that some of us still think that calling the Pope the Antichrist is necessary to win souls to Christ.)

Of course, we don’t give the Roman Catholic church a free pass; we subject it to the same Biblical scrutiny we would any other influential world power. (And while we’re at it, we’d do well always to scrutinize ourselves by the same metrics we use on others–which is Jesus’ advice, not mine.5)

But perhaps we needn’t single out Roman Catholicism any longer. Ellen White, who was often more flexible than her followers, wrote: “God wants us all to have common sense, and He wants us to reason from common sense. Circumstances alter conditions. Circumstances change the relation of things.”6

Roman Catholicism has served us well as an enemy: provocative enough to keep us energized, yet doing minimal actual damage to us. Such an important enemy made us feel significant, “in the know,” and in control, while not really disturbing our lives.

Opposing current enemies might thrust us into prophetic roles that take more commitment and action. My friend Bert B. Beach, speaking of Adventist eschatology, once said to me: “I’m suspicious when people are constantly focused on what’s going to happen in the future. I think they’re trying to avoid dealing with what’s going on right now.”

I think Bert is on to something. Could we become as enthusiastic in taking on the religious persecution that’s happening to Christians right now, in places like Nigeria, as we’ve been in accusing Roman Catholicism of planning to someday persecute us here?