Lessons from a Wet Prophet 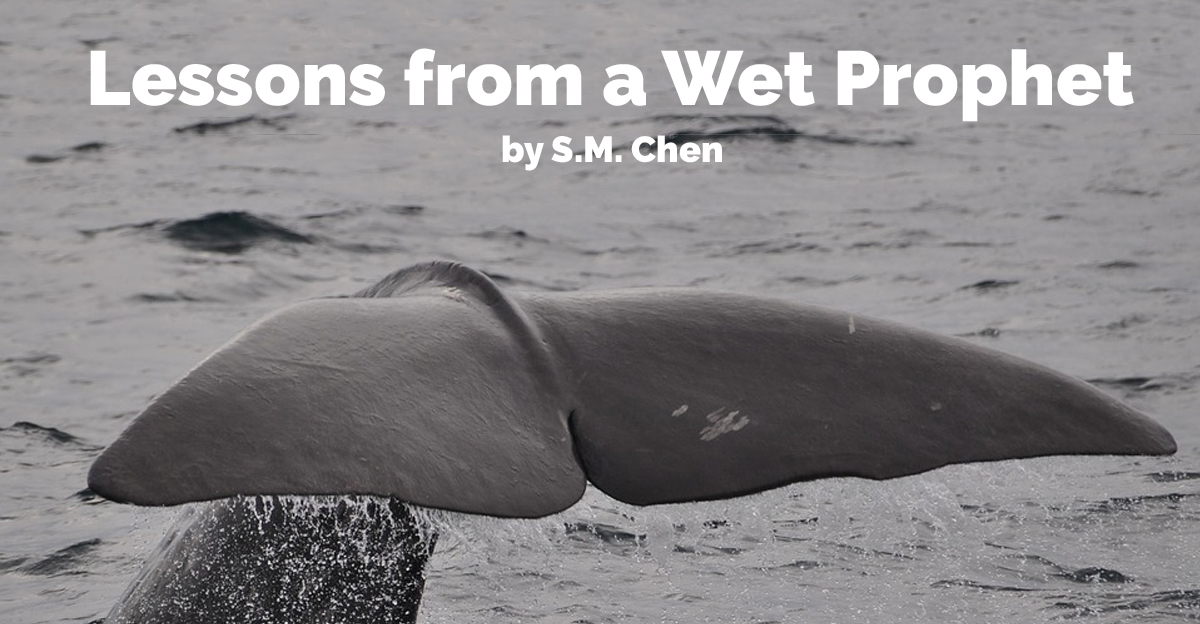 The short Bible book called Jonah was probably written in the late 5th to early 4th century B.C. Its authorship may be open to question.

The Psalms were written centuries earlier by King David. Jonah no doubt was acquainted with them. We do not know whether his reading of the scrolls was cursory or diligent. If he had read them, he’d have known that one of the grandest of the Psalms is Psalm 139: “If I ascend up into heaven, thou art there: if I make my bed in hell, behold, thou art there.”

This speaks to the omnipresence of the Almighty. Though Jonah may have forgotten this when he was asked to travel to Nineveh and deliver a message of impending destruction for the inhabitants of that wicked capital of Assyria (in present day Iraq).

Or maybe he didn’t forget. In one darker interpretation of his motive for shirking his task, he knew the Almighty was compassionate and might not destroy Nineveh, after all.

When I attended graduate school, there existed a church not too distant in which the community was divided into two groups: ODP (Our Dear People) and NOP (Not Our People). It has ever been this way from the beginning – us and them. We, the chosen, deserve all things good. Others? Not so much. But, if they hear the good news, and become one of us, then welcome into the fold. Formerly NOPs, they have now become ODPs.

That distinction can be inimical.

It is vital that we have a proper understanding of God.

If, as was taught from the pulpit by 18th-century preacher Jonathan Edwards, God is a vengeful Being dangling us above the fires of hell, we will act a certain way. Our understanding of the cosmos is that its modus operandi is justice untainted by mercy. And that, as a reminder, is what we all deserve.

The English poet Francis Thompson wrote a 182-line poem, “The Hound of Heaven,” which first appeared in print in 1893. Thompson uses the metaphor of a hunting hound for the way the Almighty pursues some of us for His purposes.

Including, in an earlier time, Jonah.

Nature, said to be God’s second book, does the bidding of the Maker of all things. So it was that a great storm arose while Jonah was at sea. It was not the first time waters had been moved. The fountains of the deep were broken up during the Great Deluge and a strong east wind cleft the Red Sea to permit passage of the Hebrews fleeing Egypt.

The practice of casting lots is mentioned 70 times in the Old Testament, 7 times in the New. It was thought to determine the supposed will of God. Sticks of varying length, flat stones, or dice may have been used. The closest modern equivalent is the flip of a coin. Perhaps less specific than the Urim and the Thummim, the casting of lots yet seemed to have served its intended purpose – to learn the truth.

The mariners aboard Jonah’s ship, bound for Tarshish from Joppa, may not have known the true God, but they knew an unusual storm when they saw one. The casting of lots as to the cause of the storm led them to Jonah.

When roused from sleep (one might wonder how could he sleep at such a time, with the combined weight of conscience and event) Jonah did not prevaricate. After unsuccessfully trying to salvage their sailing vessel, they threw Jonah, as he had bid them, into the Mediterranean, which then became calm, as if oil had been poured on the water’s surface.

This may have been the earliest recorded bad storm in Mediterranean history.

At least eight different species of whales and dolphins now dwell in the Mediterranean. We do not know how many there were in Jonah’s day. One guess is that the great fish that swallowed Jonah was a sperm whale. Sperm whales are the largest of the toothed whales. They can grow to a length of 68 feet and weight of 80 tons. Capable of holding their breath for up to 90 minutes and diving to depths of over 7,000 feet, they have been known to swallow giant squid (of which they are the sole natural predator) whole, so swallowing a man is not so far-fetched. They also have the largest brains on earth (over five times the weight of a human brain), so are highly intelligent.

A huge sperm whale rammed and annihilated the 87-foot-long whaling ship Essex in 1820, the tale of which constituted the basis for Herman Melville’s 1851 masterwork, Moby Dick.

Perhaps notable is the rarity with which this phenomenon occurs, in which tables are turned and usual victim becomes victor. Revenge may be something best served not only cold, but at sea.

That Jonah survived three days in the belly of a whale is a miracle in itself. Experts theorize that, under ordinary circumstance, survival in a whale is impossible. If the whale’s stomach acid doesn’t kill the ingested, the methane gas contained therein likely will.

In what manner the Almighty communicated with the whale is unclear. Might it have been the same still small voice that, particularly in quiet moments, some of us hear?

Jonah, hair and skin perhaps bleached by the acid of the whale’s stomach, repented and perhaps, in moments of quiet desperation, recalled the Psalmist’s assurance that the Almighty dwells anywhere and everywhere and is capable of hearing supplication from any place, even the depths of the sea.

His reported experience may well have inspired the later (1883) story of Pinocchio and his father, Geppetto, by Italian author Carlo Collodi.

Jonah lived in the belly of the whale for three days, then was regurgitated onto dry land. Never had terra firma been so welcome. Whereupon he was asked a second time to preach impending destruction to the Ninevites. This time he went. It was a three-day journey. The same amount of time he had just spent in the whale.

Jonah’s proclamation of impending destruction in 40 days was not recorded as conditional. But it was to become so. Perhaps to his surprise, the denizens of Nineveh, from the king on down, repented and the Almighty relented.

Jonah was like many of us: a slow learner. It displeased him that Nineveh was spared. He was more concerned with his reputation as a (possibly false) prophet than he was with the welfare of the 120,000 citizens of Nineveh. For they were the Other, the NOP and somehow their worth was less than that of Us, the ODP. He conveniently forgot that they, also the children of the Almighty, were no less deserving of beneficence and mercy than he. He subsequently expressed a death wish, not once but twice. Had he been destined for premature destruction, as he predicted for Nineveh, he could have easily perished in the great storm or in the belly of the great fish.

He was spared to witness the tripartite compassion of the Almighty: first to the sailors on the ship during the storm; then to him in the belly of the whale; then to the repentant inhabitants of Nineveh.

Jonah is presented as a flawed man. Perhaps that is why he is considered a minor prophet. His flaws (including hardness of head and of heart, traits not unique to those of his era) may have hindered him from a greater calling.

What his short book reminds us is:

For that we can only be grateful.