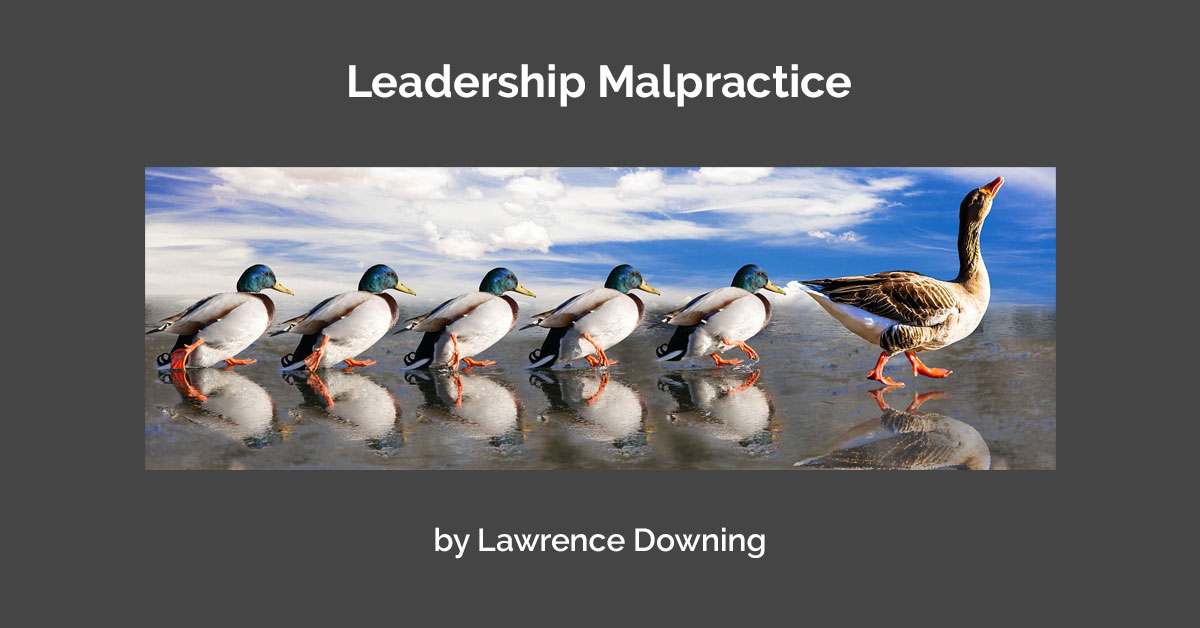 A ministerial colleague sent me links to two articles that he believed have application to events within the contemporary Adventist church. The first, “Leadership Malpractice” by Barbara Kellerman, James MacGregor Burns Lecturer in Public Leadership at the Harvard Kennedy School, is from the November 21, 2008 Harvard Business Review. Her lead paragraph reads,

When a health care provider or an attorney is negligent to an extent that deviates from accepted standards of professional practice, and when this negligence causes injury, there can be consequences. He or she can be sued for malpractice. Accountants and investment advisors can also be sued for malpractice, as can other professionals now held to a standard expected on the basis of their training and expertise. In light of this recent history, there is no reason to exempt leaders, people in positions of authority, from analogous accountability.

The second, “Ten Signs You’re Committing Leadership Malpractice” by Randy Conley, is from the September 26, 2013 Blanchard LeaderChat, a Forum to Discuss Leadership and Management Issues. Conley begins his article with a list of three characteristics that he posits define malpractice:.

3. the behavior of most bad bosses in today’s workplace

These two articles prompt the reader to consider a leader’s or administrator’s responsibilities. I found the articles to be a catalyst to give further thought to the question of how one is to understand malpractice as it may apply to business and other organizations, such as religious bodies, and to those who lead these organizations.

Leaders hold a position of trust and are accountable to an organization’s independent, competent executive board to fulfill their fiduciary and managerial duties. They are to use their influence and abilities to support, encourage and improve people’s performance. It is a violation of trust for administrators to use their position to manipulate others to accede to the administrator’s will. Neither is it acceptable for an administrator to use their position of power in ways that diminish or harm individuals in the organization they are charged to manage and nurture. These statements invite inquiry into the question “What can employees and stakeholders expect from administrators who lead contemporary organizations, including those who administrate religions orgs?”

At minimum, a leader is responsible to further the interests and effectiveness of the company or organization that employees her/him. The effective leader creates a cadre that includes a variety of individuals with diverse skills and viewpoints. She/he will promote and practice a behavior consistent with high moral and ethical standards. Moral leaders will not manage by intimidation or threat, nor will they play to other’s prejudices or ignorance. This applies doubly to those who manage religious organizations.

Effective leaders do not aggrandize the past; they may reference the former days, but despite references to past successes, they realize times and situations change and so must they. Their responsibility is to prepare their organization and its personnel to meet the demands of a dynamic, challenging future.

Effective leaders build trust among colleagues, board members and stakeholders. Trust is an absolute essential for religious leaders. Trust is the religious leader’s coin of the realm. Take away trust, and a religious leader may as well hang it up. The religious leader, at what ever organizational level, who is less than forthright, who manipulates others to gain his/her purposes, who stifles transparency, withholds information that may threaten or counter his/her purposes, makes statements that cannot be supported by commonly accepted means or evidence, is a hinderance to the organization. Loss of trust in leadership produces anxiety, fosters a lack of enthusiasm for one’s job and results in feelings of helplessness that often end in despair and depression.

The identifiable personality character traits and behaviors that are associated with effective leadership are opposite to the negatives.These include, but are not limited, to trust, concern and interest in others. An effective leader will emphasize relationship, rather than results, adhere to high ethical and moral standards and demonstrate care for people and their well-being. She/He will encourage people to advance to their optimum potential. The organization will benefit when the leader provides effective feedback, is patient, takes people and their ideas seriously, recognizes and celebrates other’s contributions, is aware of, and utilizes, available resources, and stays current and relevant. The absence of one or more of the above attributes bodes ill for the organization and its employees.

An effective administrator will create an atmosphere that enables individuals to be effective in their work and will provide meaningful and reasonable response when things do not go well. She/He will provide the necessary resources that enhance the ability for employees to accomplish their tasks. They will consult individuals with special skills and apply what they learn to improve the organization’s effectiveness and benefit its employees. The effective leader does not have the goal to create mirror images of the leader’s practices and beliefs. He/She eschews the motto, “My way or the highway, no matter what the evidence suggests.”

When an organization’s top administrator isolates himself/herself from others, avoids consulting available resources, follows a narrow ideological track, the organization stagnates and its potential is diminished.

The effective administrator will reach out to remove roadblocks, promote new ideas, forge into untried territory, provide resources to meet contemporary challenges and offer support to those who initiate adventuresome endeavors. He/She will receive and evaluate reports from the various organizational personnel and, on occasion, will find it necessary to pull the plug when an endeavor goes south. When leadership supports and promotes a process or product that has a flawed track record, bad news for the org and its people!

To achieve desirable outcomes, responsible leaders will stay educated and current in their professional field. The old ways will not make it in today’s world. Outdated leadership practices will not cut it. Command and control leadership, the carrot and stick and other hackneyed methods may have worked last century, they are counter productive in the Century 21 global community.

What is the appropriate response when leadership fails?

Kellerman suggests that leadership is a profession like any other profession—law, medicine, accountant. He asks, “…should not leaders be held in any way accountable, and if yes, exactly how? One possibility is to bring to the fore the concept of leadership liability – and by extension leadership malpractice. In cases of alleged negligence, the medical and legal malpractice model, in which either there is a settlement or a trial in a civil court, could serve as precedent.”

“It’s time then,” Kellerman continues “to apply to leadership the same standard that we apply to other professions. Similarly, when this standard is not met, even minimally, it’s time to hold leaders accountable by suing them for malpractice. Cuts in executive pay will not suffice to fix what’s broken. Nor for that matter would leadership malpractice be a magic bullet. But sending the signal that leaders, like other professionals, can be sued for negligence, would deter bad behavior.”

It is unlikely, though not impossible, that religious leaders will any time soon be sued for malpractice, despite the fact that evidence might well support such action. It is a legitimate expectation that an organization’s executive board, acting on behalf of the stakeholders, hold a leader, be it a leader of a secular organization or a religious body, accountable when his/her actions diminish or threaten the organization she/he is responsible to administrate. It is time to take action when a leader’s mandates and behavior reflect the statement that comes out of the Viet Nam era that, in its first published form reads, “It was necessary to destroy the town in order to save it.” Responsible boards remove leaders who evidence this philosophy, or, at minimum, put a check on the leader’s influence and power.