On Learning from Bad Decisions 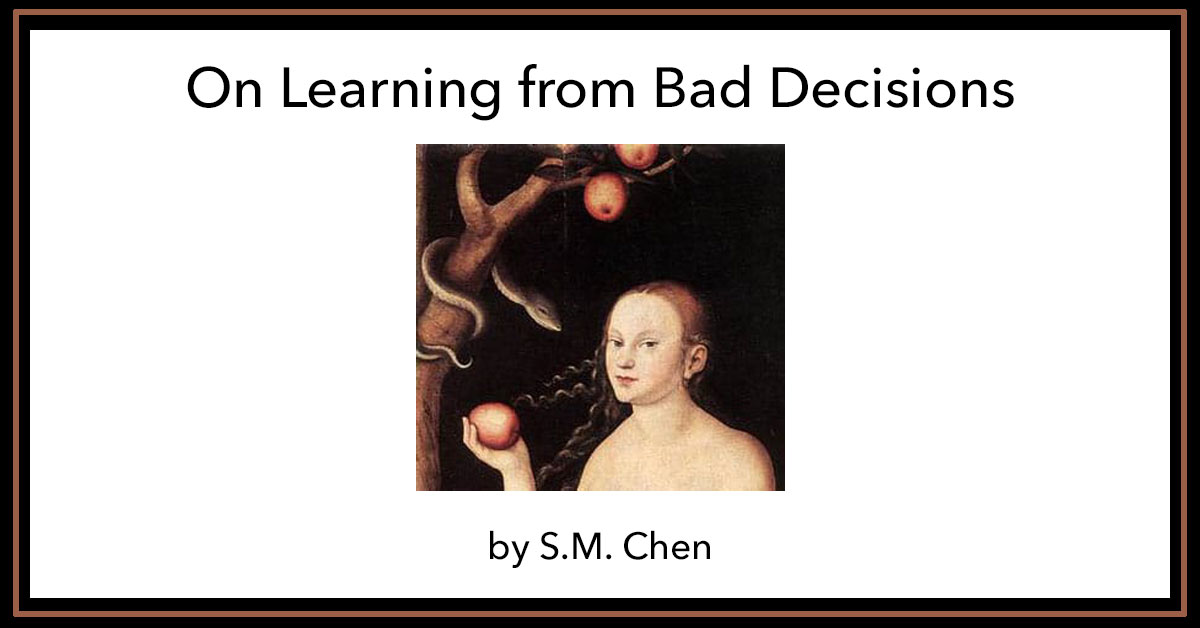 “There are no accidents in my philosophy.  Every effect must have its cause.  The past is the cause of the present, and the present will be the cause of the future.  All these are links in the endless chain stretching from the finite to the infinite.” –  Abraham Lincoln

“Every why hath a wherefore.”–  William Shakespeare

Darwinawards.com is a website self-described as “named in honor of Charles Darwin, the father of evolution.  The Darwin Awards commemorate those who improve our gene pool by removing themselves from it.”

Some sample submissions (ranked at the site by vote):

Some have died when they lost control of motor vehicle texting while driving, or operating a laptop computer while driving.  No one has proven better at multitasking than monotasking.

Others have died while taking a selfie, whether driving or elsewhere, such as on a bridge or other high place.  The stories of some of these are posted at Darwinawards.com.

I relate these anecdotes not to titillate, amuse or evoke Schadenfreude but rather remind that potential disaster ever lurks in the shadows, only the breadth of mindlessness away.

Newton’s 3rd law of action and (equal but opposite) reaction seems operative, as does the Law of Unintended Consequences.

Some might term it instant karma, the word used in a broad, informal sense that transcends Buddhist and Hindu usage.

It is sobering to contemplate that some are not spared the immediate consequences of their actions, which may be foolish and/or risky.

Some are.  We may only someday learn to what extent we have been protected from the natural outcome of our folly.

Given the many things – accidents, malevolence, illness – that can go wrong, particularly as we age, it’s a wonder any reach the proverbial threescore and ten years considered a reasonable longevity expectation (this written at the time of David, about 1000 BCE).  Lifespan hasn’t budged much since.

Adam came up short of being the first true millennial by three score and ten.

With rare exception, it’s been downhill ever since.

When I became a grandparent six years ago, I came to realize that the safety of my grandson was contingent on eternal vigilance by those who tend him.  My daughter is thus comfortable leaving him in my care.  She also knows that I value his life more than my own.

All is not lost.  We (at least some, some of the time) are capable of learning and of changing, of modifying behavior if not underlying understanding.

Bad decisions, once made, need not be adhered to.  There is often a finite time period – sometimes fleeting, sometimes longer – within which a decision can be reversed, course changed, disaster averted, perhaps destiny altered.

The Dutch drunk who lay down on the train track, hoping he was low enough to avoid being struck, might have gotten up off the track before the train arrived.  Mr. Bull, the Brit in the tub who placed a cell phone charger on his chest, might have removed it before it got wet.  Aussie Steve Irwin might have contemplated removing the stingray barb from his chest but then thought better of it.

I walk down the street.

There is a deep hole in the sidewalk
I fall in.
I am lost…
I am hopeless.
It isn’t my fault.
It takes forever to find a way out.

I walk down the same street.
There is a deep hole in the sidewalk.
I pretend I don’t see it.
I fall in again.
I can’t believe I’m in the same place.
But it isn’t my fault.
It still takes a long time to get out.

I walk down the same street.
There is a deep hole in the sidewalk.
I see it is there.
I still fall in… it’s a habit.
My eyes are open; I know where I am.
It is my fault.
I get out immediately.

I walk down the same street.
There is a deep hole in the sidewalk.
I walk around it.

I walk down another street.