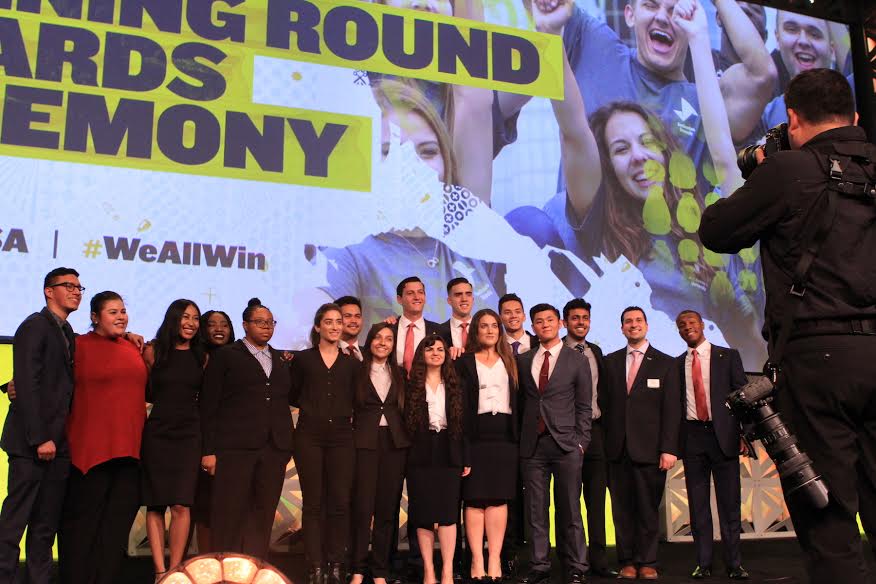 From News Release, June 11, 2017:      The team from an Adventist university in Riverside, California, ranked second in a business school competition involving more than 450 institutions in the United States. The Enactus USA National Exposition was in Kansas City this year and the recognizes of the Adventist team’s entrepreneurial economic empowerment projects that impact low-income communities in both India and the California city.

John Brown University in Arkansas was the national champion, while Roberts Wesleyan University of New York and Mount Mercy University in Iowa came in third and fourth, respectively.  La Sierra University (LSU) also won a $3,000 Unilever Project Accelerator grant during the competition for starting a new project or improving an existing one.

“I am so proud of our Enactus students. They rose to the occasion with hard work, professionalism and dedication to the values of La Sierra University and the Zapara School of Business,” said Dr. John Thomas, dean of the business school. “No matter the team’s competitive placement, the students gave their all in top-notch presentations that raise the bar for other teams.”

University president Dr. Randal Wisbey noted the team’s dedication to quality work and to making a difference in the world. “This team performed like professionals and delivered outstanding presentations that tell the story of the profound impact they and their teammates are making in the lives of thousands of people here in Riverside, and in India,” he said. “For these students to be recognized nationally is such a well-deserved honor for them. We are so proud of their mature conduct and the way they live out their faith in God and desire to help others.”

The national event included 106 teams that had won regional contests. It started with the LSU team carrying in the trophy as the 2016 champions. The teams were divided into 16 leagues for opening round competition. Judges selected the final four contenders who gave presentations immediately following semi-final rounds.

Teams gave 17-minute, multi-media presentations and answered questions from the judges who are executives at some of the country’s leading corporations. Projects were also detailed in business-style annual reports that were handed out to the judges.

The Adventist team presented projects they have developed in India and in the university’s hometown of Riverside. Altogether, the team’s projects this school year impacted 4,476 people through and students invested a total of 1,755 hours. Primary projects include the following:

This ongoing project was initiated in Denkanikottai, India, several years ago. It involves a cow bank micro-lending program that has increased the daily income of participating female day laborers from 100 to 600 percent. The laborers receive milk cows on loan from the team, sell milk to milk suppliers, repay the loan and ultimately buy the cow. The cow bank project thus far has benefitted 125 families with 25 new cow owners added this year. The team is expanding the project this year to a second village (Cheemaldari) outside of Hyderabad.

The Denkanikottai India field station also includes a tailoring school, begun in November 2015 which involves a six-month training program for women taught by a noted tailoring instructor. Graduates are offered a sewing machine microloan. The program has provided instruction for 21 tailors, including 11 participants this year, and has generated a 400 percent daily wage increase per participant.

A two-phase energy generation project called Cow Power planned for the Cheemaldari field station utilizes cows from the cow bank and encompasses kinetic energy and biogas methods. The energy project is in prototype mode this year and will be developed with $250,000 and 15 acres of land invested for this and future projects at the field station.

Following a research effort, a beekeeping micro-lending program for men was also piloted this year with the India field stations through a microloan of a kit complete with bees and necessary equipment for the cultivation of honey.

The program includes education programs such as cooking demonstrations, children’s books, and an event hosting more than 200 farmers and food systems professionals on the La Sierra campus this year.

This year, the Mobile Fresh vehicles and warehousing will be relocated to create a new hub for health education projects in Riverside. The hub will also serve as a grocery store with spaces for local farmers to sell produce, and a kitchen for cooking demonstrations.

The La Sierra team is comprised of a group of students who are assigned responsibilities for each project. A six-member presentation team describes the projects during competitions. “I prioritize preparation for each and every round with my team,” said La Sierra Enactus presentation team member and senior accounting major Joe Rees who joined Enactus four years ago. He was also a member of last year’s national championship-winning team. “There’s a feeling among the presentation team that you are in the trenches together during the competition. It’s an amazing feeling you can’t get outside of the presentation team. To feel that one last time, as well as the adrenaline you get on each stage throughout the competition, was an amazing way to close out four years.”

Ketsia Duval, a 19-year-old freshman Global Studies major from Florida, described her first-year experience with Enactus as a “golden egg” of opportunities, including the opportunity to grow in maturity, integrity, and honor. The national competition proved an eye-opening experience, in part because she was surrounded by students who are accomplishing so much, she said. “I’ve kind of fallen in love with Enactus,” said Duval.