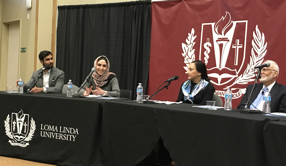 From APD, February 6, 2017:     The career-long contributions of Dr. William Johnsson were honored at the opening of a scholarly center which will focus on interfaith understanding among Adventists on Sabbath, January 28, at Loma Linda University (LLU). Johnsson was born and raised in Australia, went to India as a missionary, became a Bible scholar on the seminary faculty at Andrews University and then served as editor of the denomination’s leading journal, the Adventist Review. In retirement he served for seven years as a special assistant to the president of the denomination’s General Conference for interfaith relations.

The center will sponsor two yearly events designed to help health professionals at LLU deal with the diverse range of religious beliefs and traditions they encounter among patients, families and employees, according to the Adventist Review. It will also be a resource for LLU alumni serving as missionaries around the world and health professionals across North America.

Since 2014, Johnsson as retired in Loma Linda, California, but continues to teach courses on religion at the university and to writes books. “Dr. Johnsson’s knowledge and passion for the world religions are invaluable to our campus,” stated Dr. Richard Hart, president of LLU.

The central task of a university is to provide exchanges and understanding of different ideas, including the religious views of others, said Dr. Jon Paulien, dean of the School of Religion at LLU. The Center is not just about theoretical discussion of other religions, it will also provide for personal exchanges with members of other religions, listening to what they have to say, including those who work as employees of the health institutions at LLU, Paulien said.

At the opening ceremony, Dr. Nahidh Hasaniya, assistant professor of medicine, recited a text from the Koran, which was translated by Dr. Shamel Abd-Allah, professor of medicine. Dr. Jihad Turk, president of Bayan Claremont Seminary which educates Muslim scholars and imams, spoke on the topic, “Why I am a Muslim.”

Two other faculty members at LLU, Dr. Mahmoud Torabinejad, from the dental faculty, and Dr. Eba Hathout, from the School of Medicine, spoke on the topic, “What is it like to be a Muslim at Loma Linda University.” Students and faculty participated in a panel discussion about how Christians and Muslims can understand each other better.

LLU was founded in 1905 with the encouragement of Ellen G. White, one of the cofounders of the denomination, and is the leading Adventist university of health sciences. It currently has 4,444 students and 1,478 full time employees as well as many faculty members who are in full-time practices and volunteer as teachers. The university offers degrees in 132 areas through its graduate schools of Allied Health Professions, Behavioral Health, Dentistry, Medicine, Pharmacy, Public Health and Religion.

APD is the Adventist news service based in Europe. The featured photo with this story was taken during the panel discussion on Sabbath afternoon at the opening event for the Johnsson Center.