Is the Current General Conference President the “President of the Seventh-day Adventist Church?” 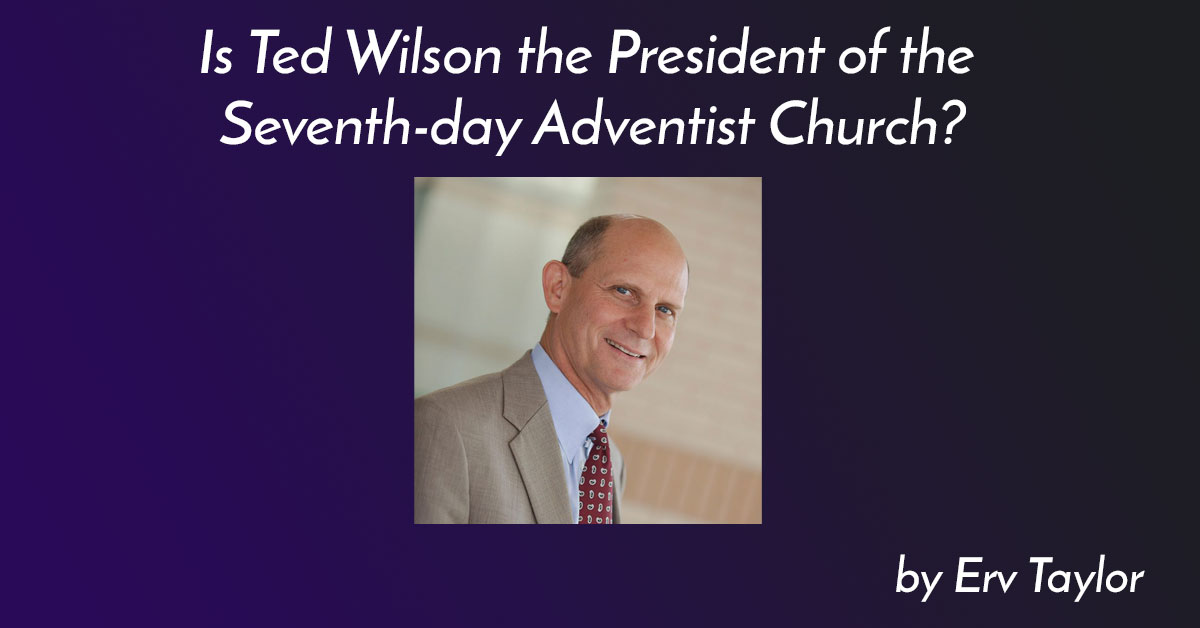 by Ervin Taylor, June 9, 2017:     A recent article in Adventist World (June 2017) entitled “The Latter Rain Is Coming” had as its author the current president of the General Conference of Seventh-day Adventists, Ted N. C. Wilson. This commentary is not addressing the problematical substance of the article, which perhaps will be a topic to take up at a later time; it is focusing attention on the title conferred on the author of this article.

Reading through this issue of Adventist World, I scanned the article, came to the end, and was about to turn the page when something caught my eye. At the bottom right of the second page of this piece was listed the byline of the author. It read “Ted N. C. Wilson is president of the Seventh-day Adventist Church.”

“OK,” I said to myself (I talk to myself a lot these days), “that’s the author,” and was again about to turn the page when . . . . Wait a minute, hold the phone (not a literal phone–a metaphorical phone)!

Again, I thought to myself: “There is no such thing as the “president of the Seventh-day Adventist Church”!

To make sure that I hadn’t somehow been misinformed all of these years, I went to the current definitive source of such information, the General Conference (GC) website. At the home page of the GC, there is prominently displayed in relatively large type the following statement: “The General Conference coordinates the global ministry of the Seventh-day Adventist Church, a body set up under the belief that no man should be governed by the judgment of another [Hmm, interesting], and any decision should be made by an assembly.” [Really?]

Let’s see what it says about the president of the GC. How is his (it’s always been a “he”) position described? On the “Leadership” tab you can read the following: “Ted N. C. Wilson was elected as president of the Seventh-day Adventist world church . . . in 2010.”

That’s interesting. The GC website insists that he is the “president of the Seventh-day Adventist world church.”

Is that true? Was he, in fact, “elected” (let’s not get into how that “election” actually happened with no secret ballot in the “assembly” either in 2010 or 2015) as the “president of the Seventh-day Adventist world church.” Was not he elected as president only of the General Conference of the Adventist Church? Is there any organization with the name “Seventh-day Adventist World Church?”

Again, just to make sure that I had not perhaps been misinformed about this all these years, I went again to the GC website to look up the constitution and bylaws of the GC. This turns out to be a very interesting document which members of the Adventist laity might wish to read to see how “their” church is supposed to do its business — at least officially. Especially interesting is who are the designated as delegates to the General Conference session. The laity is certainly not the majority of the delegates even though they provide the money that keeps this enterprise operating. That’s the topic of yet another commentary. But back to the topic being considered here.

The text of this constitution and bylaws was last revised at the 2010 GC session, so it is reasonably up-to-date.

Article I says that “this organization should be known as the General Conference of Seventh-day Adventists.” There is nothing in this article about a “world” church.

Article VI, Sec[tion] 1, states that the “following shall be elected at each regular session of the General Conference. In paragraph a, it states that “A president . . . .” Nothing in this section talks about a “world church president.”

Article IX, Sec[tion] 1, says that “The officers of the General Conference shall be a president . . . .” Still nothing about a “world church president.”

There is no additional language either in the constitution or bylaws of the GC assisting a reader to understand the position of GC president.

Perhaps there are those who will respond with: “So what?” Or with something like: ”Why are you making a big deal of this?”

To be honest, I’m not sure, as yet, what to make of this. In the case of the article, perhaps this is just some copy editor forgetting to put “world” in front of “Church” so that what should have appeared was “Ted N. C. Wilson is president of the Seventh-day Adventist world church.” But is that true? To be specific, should not the byline have read: “Ted N. C. Wilson is the current president of the General Conference of Seventh-day Adventists”? But what difference does it make?

That is the question to which I hope different individuals will respond. Does it make any difference? After all, the Seventh-day Adventist Church is only a little over 150 years old, and its current organization is only about 115 years old. It took our friends in the Roman Catholic faith tradition about 600 years from having the Bishop of Rome as just one Christian bishop to having him insisting that he is the Supreme Pontiff of the universal Christian Church. So perhaps we Adventists don’t have to start worrying about this problem for a few more centuries.