Fort Scott, KS: Conservative to Liberal—Love on a Spectrum

All too often, the conversation around the concepts of liberal vs. conservative Christianity becomes an exercise in finger-pointing. Liberals paint conservatives as more judgmental and less loving, while conservatives claim that liberals are all about cheap grace—“God loves everybody; it doesn’t matter what you do.”

This week’s church profiles—really a district profile—shows the falsehood in such polarity.

Pastor Rod Scherencel told me, “Each of my four churches has its own personality. And I love them all.”

In fact, he told me emphatically, more than once, “I don’t ever want to go anywhere else!”

In part, it’s the contrast. Scherencel has sometimes pastored where there was a lot of pain and struggle, and yes, finger-pointing legalism. It’s wonderful to him to be in a place where people just love each other.

He came to the ministry by a roundabout way. The son of a pastor/evangelist, he left the church in his teens and tried alcohol, cocaine, and promiscuity. He was married and divorced. He married a second time, and to his intense dismay, his wife, Lynne, became an Adventist. Sherencel told me he was really angry about this. “I was not a very nice person. I made life hard for her. She kept telling me, ‘I’m not trying to change you, I’m not trying to make you do anything, this is just something I need to do for me.’” After a year, he realized it was true, and he “broke down and had a conversion experience.”

He did some self-supporting ministry, and went back and forth between public evangelism and church pastoring for some years. He explained that although he intellectually understood and taught salvation by faith, he hadn’t really internalized it. Then, “through a very bizarre, God-led circumstance where somebody passed on some material about righteousness by faith to me…it changed me. It changed me, my ministry…it changed every single thing about my life.

He told his conference he needed a church where he could be a husband, and his wife could “nest.” She had followed him all over the place for years, and she had never had the chance to have a true home. Another “miraculous move” put them in the Port Angeles church in Washington, “exactly where we needed to be.”

That wasn’t the final move; they still pastored a few more churches after that, but now they are settled in Kansas and Scherencel says he only has four years until retirement and hopes to stay right where he is. “If you had told me I’d be moving to Kansas, I would have said, ‘No way!’ But now…I love—I absolutely love my churches! I haven’t found a church I enjoyed pastoring more than this district.” And he repeated, not for the last time, “I absolutely love it.”

During the course of his ministry, Scherencel has occasionally pastored in places where he would not want to bring visitors. This is not one of those places.

The people, he says, are very conservative, at least in doctrine. “But people,” he continued, “can come into any of the churches, wearing anything, believing anything; they will love and accept them. People stay because they feel loved.” 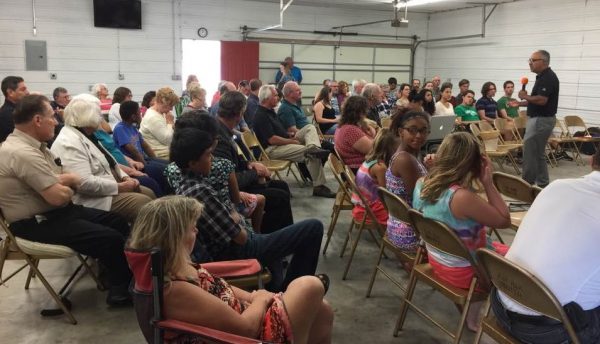 One shy young woman was actually afraid she would not be welcome because she has a gay sister. (Makes a person wonder where she’s been to church and what happened to her there…) These churches told her, by both words and actions, “You are welcome here. And so is your sister.”

I asked Pastor Scherencel why he thought they were so loving. He said he didn’t really know; they were this way when he got here four years ago. But he has an interesting theory. This area of Kansas, he says, was settled by families who stayed. Even when young people left for the cities, they often came back. He feels that the sense of family and the tolerance one has to learn when generations live near each other for a century is one of the key ingredients in the loving attitude found in all the churches.

I asked him if he could characterize each of the four. So, if you’re in Kansas, and you’re looking for a loving church home, here is what you need to know.

The worship style here is very traditional. All songs come out of the hymnal, and the order of service is pretty much what you would see anywhere. But Scherencel says he throws in a bit of innovation now and then, and generally they like it, such as a recent sermon on Isaiah 9 in which he made use of the Lifehouse video skit “Everything.” Most importantly, if they don’t like something, he says there is “no criticism. People express themselves very kindly. There is no harshness, or the kind of demanding nature I’ve seen in some other churches. I like it when people are honest with me about something they want changed. I’m happy to do that, and they’re so kind about it.”

Fort Scott is mostly made up of one large extended family. This may sound like a recipe for disaster, but in this case, Scherencel says “the children were raised very well, and have stayed in church, where they all act like a family.” This means everyone who attends, not just everyone who is blood family.

Again, this church is very traditional in worship style and attitude toward doctrine, while being very loving. Hepler, Scherencel says, is almost all relatives, too, though with a wider relationship net of more distant relations—cousins, in-laws, and so on.

“They hold a very, very successful, once-a-year, huge family reunion, and everyone is invited. My wife and I, or the latest visitor—we’re all told, ‘You’re officially part of the family.’ That is the culture of the Helpler church.”

This church still does things in a mostly traditional way, but is perhaps a little more adaptable to new ways of doing things. It has a very different atmosphere from the first two; Scherencel called it “very eclectic.” There are people from many different walks of life—a physics engineer, farmers, single mothers with young children, “just a hodgepodge of different people from different backgrounds.”

Scherencel told me this used to be the largest church in the area, but is fading, though not for any negative reason he knows of—certainly not during his four years.  “There used to be university professors, but they’re getting old. The young people are moving to the cities, and the church is declining in size.”

This is the church which first caught my attention. In August of 2012 I did a profile for Adventist Today of Mark “Wandering Bear” Barger, an ex-policeman who uses Native American instruments and traditions in a music ministry that reaches many people who might be considered to be on the fringes of American society. He attends the Galena church and maintains its Facebook page.  I have been impressed with how frequently he posts, and asked about profiling his church. “It seems like the kind of place anyone could come and feel safe,” I told him. It turned out he and Scherencel were together at the time and he reported that they both laughed and agreed, “Yep, that would be our church!”

Galena is tiny, and there’s not much traditional about it. “They are,” Scherencel reports, “open to just about anything!”

In fact, as tiny as it is, they own an excellent sound system with audio-visual capabilities, because a wide variety of music is important to their worship. Scherencel said he began with 13-15 attending and doing inductive Bible study around a table in the fellowship hall for Sabbath School. They all liked the round table atmosphere so much that he offered to do sermons that way. He sat at the table with them, and found he used a much different style, more conversational than expositional. The group grew too big for the fellowship hall and they now have gone back to the sanctuary, but they all sit in one group on one side of the sanctuary and maintain the same informal, conversational style.

Scherencel said, “I would not be ashamed to bring in anyone at all to any of the four churches. There is a very family feeling in them all.” And the people come. He keeps hearing people say they left atmospheres that felt unloving and rigid, and they’ve found a home at one of these four churches.

Four times a year, all four churches have a large joint worship service. This often happens in “the Shoppe,” a large building the Scherencels own. That’s what the featured image for this story depicts.

Unlike some of the churches we have profiled, this district doesn’t have a long list of high-profile ministries. They just love God, love each other, and love everybody that comes within their orbit.

Love, as we all know at heart, is almost always the answer.