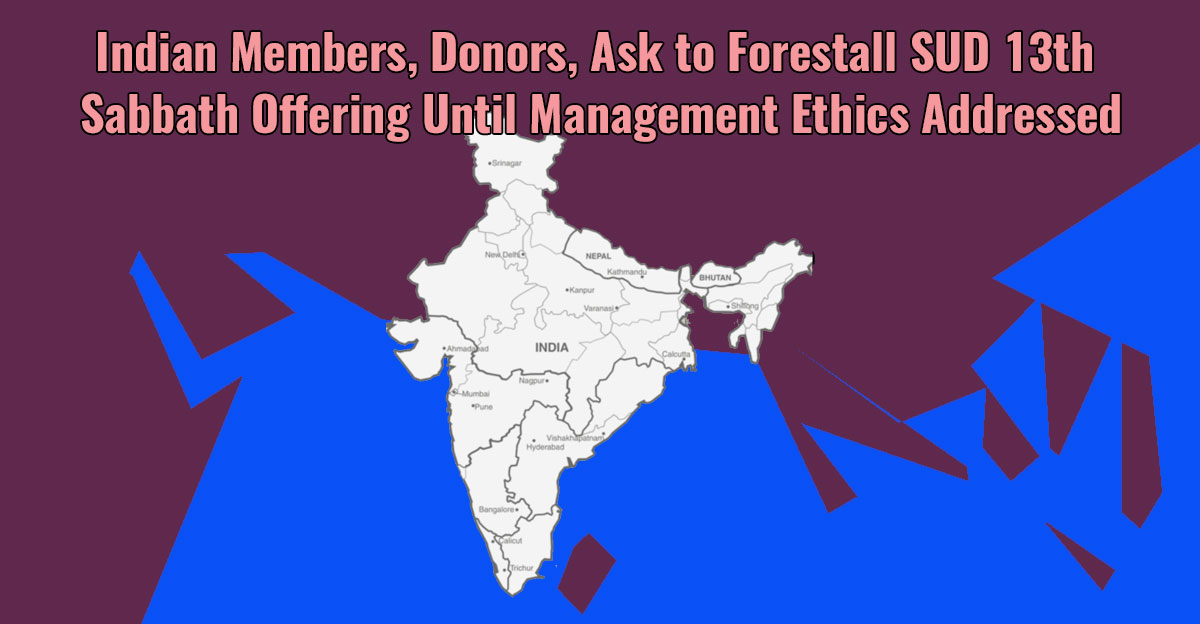 Reports over the last several years have suggested that the Southern Asia Division (SUD), once the darling of church builders and Share Him evangelists, is in trouble. Donations have dropped, according to reliable sources, even before COVID-19. Recently the division removed around half a million names from the church rolls.

Meanwhile, complaints continue to mount, both from members within the Division and among Indian Adventists elsewhere, that SUD leaders are not dealing honestly and ethically with church money. Members in India, and donors from other parts of the world, have found their complaints fall on deaf ears at the General Conference (GC). Elder Wilson said publicly in a meeting in India that those who contacted him about financial irregularities in the division office and its associated unions were passing on “fantastically concocted false information.”

The result is that those who want to support gospel work in India are having a hard time knowing where to give their money safely.

Appeal 2020 requests that the denomination not release to the SUD the 13th Sabbath Offering gathered on December 26, pending investigation of accusations of mismanagement.

The appeal goes on to explain:

As faithful Adventist laypersons and workers who are Indian citizens, Indian expatriates, and church devotees, we seek the support of church members and all levels of church administration who are aware of serious shortcomings in the Southern Asia Division. Our goal is to achieve change by impacting mismanagement at every level and insisting on accountability. We are in full support of the church’s real mission—proclaiming the gospel to the world. This petition to postpone the 13th Sabbath Offering to the Southern Asia Division until issues are rectified reflects our clear understanding that an influx of funds at this time would only increase the issues of corruption.

The appeal lists a number of by now well-known issues in the management of the SUD, and the denomination’s non-response to them.

The 13th Sabbath Offering for the SUD that will be taken on Dec 26 around the world was scheduled about seven years ago and the projects were selected in December 2018 (according to GC exec comm minutes).

The projects in India that are to get funding from the December 26 offering are:

Buildings, donors have said, are a particular problem, in that church leaders in India have been known to take shortcuts in acquiring property, as well as trying to sell real estate with insufficient oversight as to proper procedures and accountability of the funds obtained.

Appeal 2020 represents what one backer calls “a desperate effort to encourage church leaders to take seriously the ethical problems” in the SUD. It asks that the 13th Sabbath Overflow Offering be withheld from SUD leaders contingent upon a meeting with the General Conference, in order to underline the urgent crisis and the critical need to re-establish Christian values of honesty, integrity, and adherence to principles that are being ignored, concealed, and even rewarded.

The appeal approach was chosen for 4 reasons:

Though the appeal was sent to Section (Mission), Conference, Division, and General Conference officials and the GC Executive Committee, there has been no response.