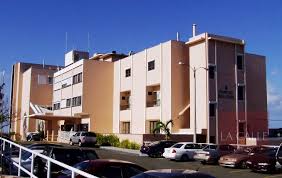 By Jeff Boyd, December 1, 2017:      Communities across the Caribbean are still struggling to return to normal. Hurricanes Irma and Maria were both Category 5 storms when they smashed through the region in September, damaging roads, buildings, homes, water supplies and communication systems. In response, local Adventists as well as a number of international Adventist organizations have taken steps to care for those most affected. Disaster response projects are underway by the Adventist Development and Relief Agency (ADRA), Maranatha Volunteers International (MVI), and Andrews University.

Hurricane Maria hit Puerto Rico especially hard on September 20. Virtually all of the island lost electricity, and more than two months later, at least 40 percent of the area still lacks power. Additionally, 17 percent do not have water restored, according to a report by the Adventist News Network (ANN).

Pastor David Sebastian Rivera, director of communication for the Adventist denomination in Puerto Rico, described the damage to Adventist Today. The Union Conference office telephone access was cut off, and communicating by mobile phones continues to be difficult because of damaged cell towers. “One of our challenges is that all the local conferences do not have electric generators and some only have them in the central offices and the matter of getting constant diesel has its economic impact. … The Southern and Northern conferences are without electric service,” Rivera said.

The storms also affected the schools in Puerto Rico. Many classrooms had the roofs ripped off, leaving them exposed to wind and rain. For example, at the Denis Soto Academy in Ponce, the roof collapsed. “Classes in … our Adventist Academy in eastern Puerto Rico began on October 9, in some cases with electric generators. Public schools in Puerto Rico began on October 24, but not all of them, due to security reasons and inadequate services for learning,” explained Rivera. Classes did not resume at Antillean Adventist University until early November.

Remarkably, Bella Vista Hospital, the Adventist medical institution in western Puerto Rico, did not close during or after the hurricanes. Rivera credited ADRA and the Medical Cadets Corp (MCC) with doing “an extraordinary job taking supplies, impacting hard-to-reach areas, and doing health clinics with Bella Vista Hospital.” The MCC trains young adults as field medics both to prepare them for military service and to engage in disaster response projects and is operated by the Adventist denomination.

ADRA has opened 38 hot food centers which are feeding more than 4,000 people per day. ADRA is also operating four food collection and distribution centers. ANN reported that by the end of November with the help of ADRA International, local church volunteers organized by ADRA Puerto Rico had distributed about 50,000 emergency food boxes.

In addition to ADRA, the Prints of Hope ministry and other sponsors are repairing roofs on 200 homes. Also, four new homes will be built for four families who do not qualify for assistance from the Federal Emergency Management Agency (FEMA).

Local church structures were damaged across Puerto Rico. “Several churches in the East suffered structural damage and now lack electric power and potable water service. Northern churches were affected significantly; some lost their roofs, others got three to four feet of water and mud. In the Southern Conference about 10 churches were greatly affected,” Rivera said.

MVI is developing response plans. The Inter-American Division reports, “Among the 16 churches and five schools destroyed by the hurricanes across the island, MVI will focus on visiting a community in Loiza, a town with the highest poverty index, an hour away from San Juan, the capital city, to assess the extensive damage to the small Adventist church there.”

MVI plans to lead building projects on other hard-hit islands as well. Areas of focus include churches or schools on Dominica, St. Croix, St. Thomas, Tortola, St. John, and Sint Maarten, though damage assessment is still on-going, according to an Inter-American Division press release.

ADRA has projects underway or in development that will meet the needs of 7,300 households with a total of 28,100 family members. Food, water, sanitation-hygiene and shelter operations are already active in St. Maarten, Anguilla, Haiti and the Dominican Republic. Projects are planned in Barbuda, Tortola, Turks and Caicos, Dominica and Sint Maarten.

While significant strides are being made, it will be months or even years before the island communities fully recover. The Adventist agencies continue to need volunteers and supporters, and this need will continue through next summer and probably into 2019.

Jeff Boyd is a contributing editor for Adventist Today. The featured photo is of Bella Vista Hospital.