Highlights of the Final Two Days of Annual Council 2017 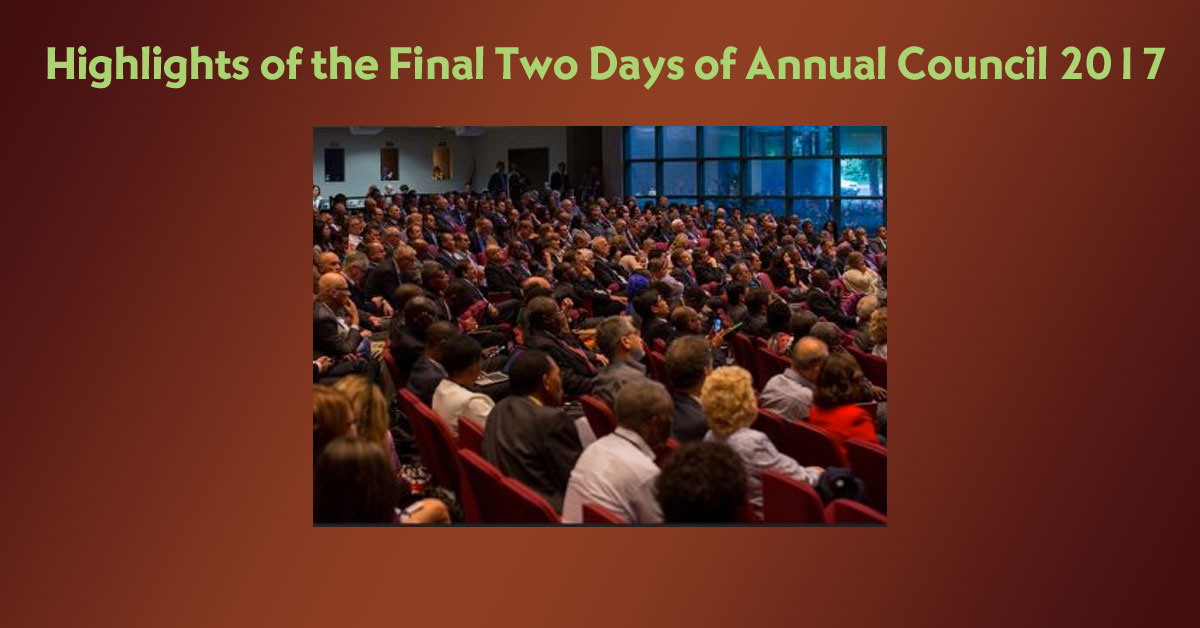 We’ve put together some of the highlights of the often eye-crossingly boring final two days of Annual Council. The atmosphere was considerably more relaxed on October 10-11 as the compliance document had been sent back to committee on October 9. Here are some of the more interesting moments:

On Tuesday morning, October 10, GC Secretary GT Ng spoke to a major theme for the day saying that nurture and retention are very important but they are not necessarily top administrative priorities. He asked the crowd to discuss why that is the case. Ng referenced the Gospel Commission saying “Teaching is a post-baptismal activity that many of us ignore.”

Despite the stress on retention, Ng challenged leaders to be professionally honest by doing membership audits instead of letting insecurity prop up bad data.

Data was shared showing that an overwhelming majority (63.5%) of those leaving the church are young adults. The importance of young adults was stressed repeatedly despite the irony that hardly anyone in the room was young.

Click here to help Adventist Today defray the expenses of reporting on GCAC17.

David Trim (GC archivist) spoke to the attrition problem: “The numbers flowing through the front door mask the numbers going out the back door.” He insisted, however, that it is important to have accurate data no matter how depressing.

The biggest reason people leave the church is perceived hypocrisy in other members according to Trim.

Mark Finley spoke to a “loss cycle” showing why members leave the church. On an optimistic note he said, “You can have all kinds of statistics, but if you love them they are going to come back.”

There was a lot of social media commentary on the irony of discussing retention problems while the GC leadership alienates young adults and women. AT writer Lindsey Painter, tweeted: “1 day after GC-driven conflict to force their regressive values on us, the GC wonders unironically why it can’t retain young people.”

In a switch of gears, The Executive Committee voted to create three unions within Zimbabwe. The country has almost a million Adventists.

Around noon on Tuesday, GC youth ministries offered free ice cream to everyone under 35 during lunch. We are pretty sure they didn’t go through too many tubs.

As the afternoon started, the word “backslider” started being used to describe those that had left the church in renewed discussion about nurture, retention and attrition.

A priceless comment from the floor by a millennial: “Most of the time when we try to retain the youth we use old people for ideas. I don’t think that will work.” She added that the old are often judgmental of the young.

As discussion turned to discipleship it became apparent that the church doesn’t have a good way to measure discipleship work. “Measuring discipleship isn’t an easy thing, but it will be an important thing moving into the future,” said Thomas Lemon, GC VP.

Just as in the morning, speakers stressed the importance of membership audits saying that not having clean numbers was vain, deceitful and horrible practice.

“Baptizing people should be like adopting them into a family,” said Dr. Ann Hamel, talking about conflict resolution in church. Dealing with conflict was established as a high priority for retention.

Ted Wilson critiqued the flawed thinking behind church attrition. He discouraged the line of thought that “If people don’t fit into our plan, just get rid of them.”

During a presentation on Sabbath School on Tuesday afternoon, the room seemed distracted and many people were missing. It felt a lot like regular Sabbath School.

A moment of levity came in the afternoon when Hensley Moorooven promised an iPad prize for a Church Manual quiz-winner. The prize turned out to be an Eye Pad.

There was a push for clear language in the church manual addressing pastors and elders that are not settled but move around regions. A suggestion was made to include language about ordained deaconesses. This was sent back to committee.

On Wednesday morning, October 11, Wayne Blakely of Coming Out Ministries presented the devotional saying: “If you’re gay and you’re listening, Jesus has answers and solutions.” The ministry’s website says: “Each of us has struggled with same-sex attraction, especially inside of Christianity when we lacked the much needed dialog and Biblical counsel. But God never gives up. The power of prayers by loved ones made way for God’s intervention in our lives. Our choice today is to live for Him as a result of His enduring love, instead of living by our “feelings.” The continued changes in our lives are not a result of any specific therapy, but a result of becoming intimately acquainted with Jesus one on one, and daily submitting to His miraculous, recreative power.”

Ted Wilson reinforced what Blakely said, claiming that cultural Adventism will steal your salvation. Wilson called for what he called “Biblical Adventism” instead.

Black and white 1920s archival footage of Adventist missionaries in China was shown courtesy of GC Archives. David Trim took to the stage and spoke to the need for historical records that remind us of our identity. He stressed that part of the Adventist identity is our tradition of embracing debate and parliamentary maneuvering. Trim said that vigorous debate is the “Adventist way.”

ARTV, a video compliment to Adventist Review and Adventist World was demonstrated to the crowd.

Adventist Public Campus Ministries made a really strong case for the need for young Adventists on public university campuses around the world. Nurturing and empowering this group is key.

Andrew McChesney enthusiastically promoted AdventistMission.org and the mission story resources shared there. He claimed he had the best job in the world since he got to travel the world and report on mission stories.

Ganoune Diop of the the GC Religious Liberty Department described major ecumenical trends. He noted that while many denominations signed the Joint Declaration on Justification, Adventists did not because it did not fully reflect Adventist belief on the doctrine of justification by faith.

The White Estate claimed that the Whites were “creative, innovative and surrendered.” An updated Ellen White resources app called “EGW Writings 2” (available for both Apple and Android) was presented.

GC Associate Communication Director Sam Neves, talked about the new visual identity branding system of the Adventist Church. The idea is to have a recognizable brand identifying the church worldwide.

At the very end of Annual Council, Wilson commended the group saying “so many of you have stayed,” noting the fact that the room was fairly full in the final minutes of GCAC17. He led the room in singing “We Have This Hope” to close.