Hear Them Roar: AAW Honors Women (and Some Men) of the Year 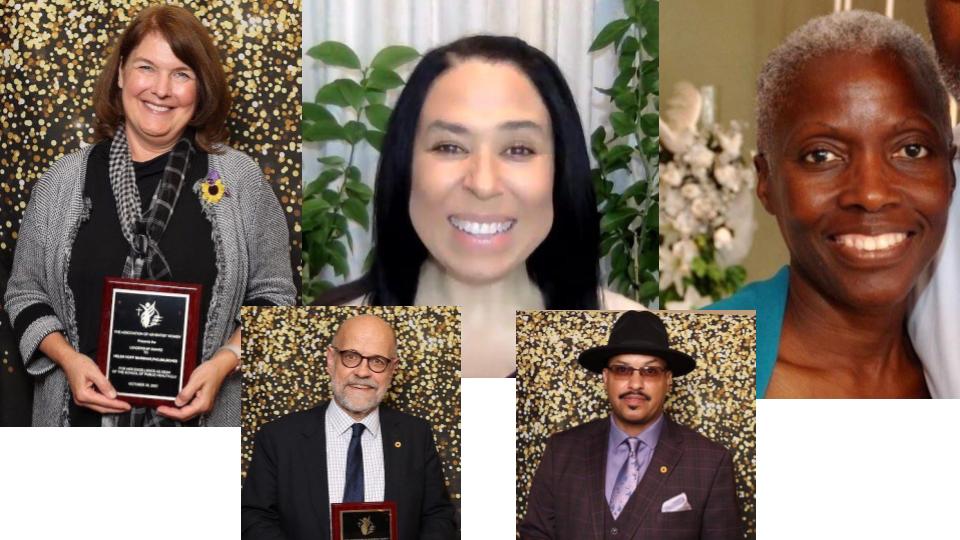 11 November 2021 | Stop us if you’ve heard this one: An educator, three former conference presidents and an immunologist, all Adventist, walk into a bar — and then set it higher.

On Oct. 30, 2021, the Association of Adventist Women (AAW) awarded five individuals for their outstanding and unique contributions to home, community, and/or professional life. AAW’s mission is to advocate for full recognition of God’s diverse calling of women and men in all leadership roles in the Adventist organization, congregations and communities.

A prolific author, she has published 57 articles and participated in 27 research/evaluation activities for the USDA, California (US) and counties of San Bernardino, Imperial, and Riverside (also in California). She has given presentations for professional meetings, including the American Public Health Association, Cancer Congress and American Psychological Association.

Sika-Paotonu (MD) received the Woman of the Year Award for Scholarship, via Zoom. She is Associate Dean at the University of Otago in Wellington, New Zealand, where she is an immunologist. Her research assesses sea sponge extracts as an enhancer for cancer treatment, and reworks the penicillin formula to prevent recurrence of rheumatic fever. AAW President Nerida Bates, a pediatric specialist, commended the social justice issue of reformulating penicillin for rheumatic fever, which particularly affects children in the developing world.

Sika-Paotonu was a Fulbright Scholar, received the Sir Thomas Davis Te Patu Kite Rangi Ariki Health Research Fellowship, and is on the Council of the Royal Society Te Apārangi. Sika-Paotonu is also very active as president of the Adventist Student Association which promotes university student ministry in Wellington, New Zealand.

Ware Lee (MBA, CPA) was given her award, also via Zoom, for Woman of the Year, also in Leadership and Administration. Ware Lee served as president of the Central States Conference of Seventh-day Adventists in the North American Division (NAD), and was the first woman of color to fill the office. She was also the first woman since 1905 to be a conference president.

She served as Chief Financial Officer for the Office of Regional Conference Ministry, and Regional Conference Retirement Plan, and also as treasurer for Central States Conference. She worked in the Adventist church for more than 35 years and recently retired to Toney, Alabama, US.

The Champion of Justice Award was given posthumously to Fordham and accepted by his son, Donovan Fordham. As Allegheny East Conference president in the NAD, he passionately advocated for women in ministry and women’s ordination, despite severe criticism. Two women were ordained in his conference in 2020, and another is pastor in the Washington D.C. metro area. He served in the church for more than 45 years. Henry and his wife, Sharon Wright Fordham, died recently in a house fire.

Champion of Justice and speaker Sandefur (DMin) was celebrated as a strong, lifetime advocate for equal treatment of women in ministry. He cofounded the ENDITNOW campaign to stop violence against women, along with the General Conference (GC) Women’s Ministries Department Director Heather Dawn Small. Materials for local churches to download and distribute are on the GC Women’s Ministries website. An ENDITNOW virtual summit is being held this Sunday, Nov. 14, 2021, and will be livestreamed on Facebook.

He has served as pastor, chaplain, president of Hawaii and Rocky Mountain Conferences, MidAmerica Union Conference (all in the NAD), president of ADRA, and Vice President for Mission at Adventist Health.

Since 2014, he has served as chairperson of the Versacare Board of Directors, a philanthropic Adventist-affiliated organization with medical roots which gives grants to Adventist missions, schools and students. Versacare is designed to have 60 percent female board members. Versacare gave $100,000 (USD) to Time for Equality in Adventist Ministry for female theology student scholarships.

You can view this 49th awards program and the series of four October International vespers programs, “What Does God’s Justice Look Like?” online at the AAW website: https://www.associationofadventistwomen.com

(Photo: The 2021 AAW Woman of the Year and Champions of Justice awardees are (clockwise, from top left): Helen Hopp Marshak; Dianne Sika-Paotonu; Phyllis Ware Lee; Henry Fordham III, whose award was accepted on his behalf by his son, Donovan Fordham (pictured); and Charles Sandefur. Photos courtesy of AAW)