General Conference Leaders Respond to Criticism of The One Project 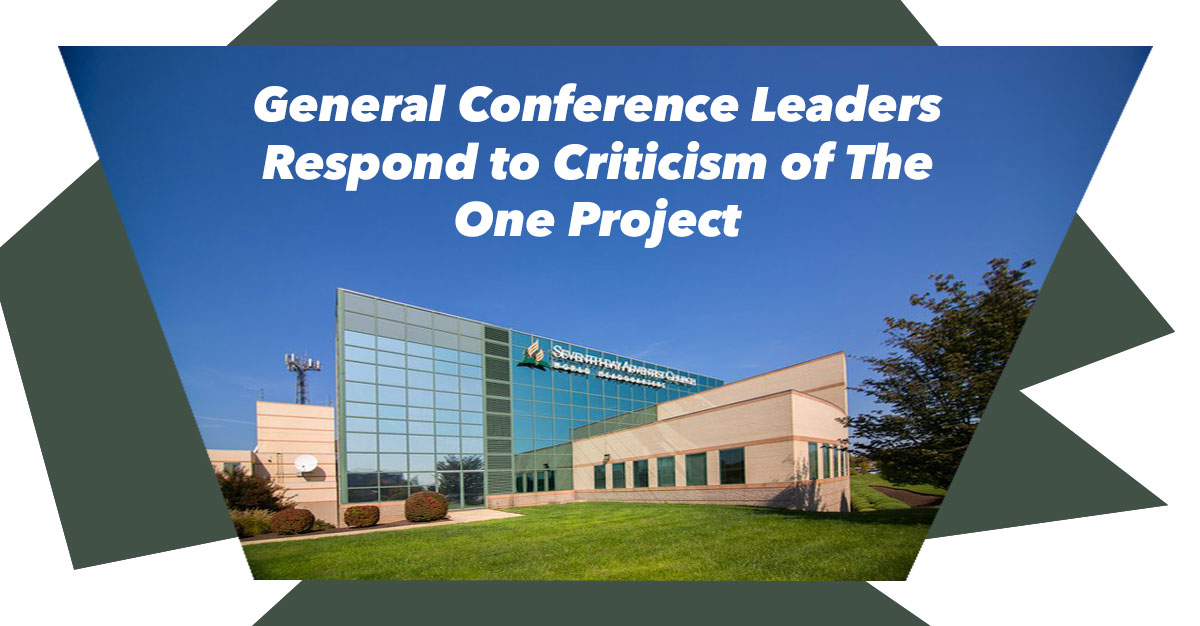 Following the Spring Meeting of the Adventist denomination’s executive committee, the General Conference (GC) executive officers and vice presidents (which includes the Division presidents) met to issue a statement that seems to focus primarily on questions raised about The One Project, a series of large Sabbath gatherings that have focused for several years on a Christ-centered Adventist faith.

The statement as released by Adventist News Network (ANN), the denomination’s official news service, states that “church leaders are often asked for advice on how to relate with some initiatives and organizations,” and then refers specifically to The One Project as well as “a number of entities both inside and outside the church organization.” It is unclear which groups the GC officers had in mind, but the debate over the proper balance between a focus on a simple faith in Jesus and an emphasis on traditional interpretations of Bible prophecy goes back to the 1888 GC Session. It has ebbed and flowed in the nearly 13 decades since.

Traditionalist voices among Adventists have become increasingly negative about The One Project despite the fact that it was organized by pastors from some of the largest congregations in the denomination. In fact, the project closed down earlier this year, in part because of vitriolic and unreasonable attacks by a few self-appointed critics.

The statement of the GC officers begins with the central idea of The One Project; “To honor and exalt Jesus is the foundational commitment” of the denomination, and “salvation by faith alone leading to a life of discipleship to Jesus is the goal of our mission.” It remains to be seen how many of the critics will react negatively to this premise.

The statement continues with a plea for Adventists and related groups to affirm six other teachings, including a literal six-day creation in Genesis 1; “the historicist explanation of Bible prophecy;” and a question about how to “understand gender identity and the question of LGBTQ+ relationships to church membership in the light of Scripture.” The One Project has never taken a position on any of these items and always operated within the 28 Fundamental Beliefs of the Adventist denomination, so it is unclear why this list was created.

It was suggested in a report published on the Spectrum web site that this statement might be a draft of the “loyalty oath” that was proposed for Union Conference presidents last fall at the Annual Council of the GC executive committee. But it is more likely that it is simply a quick response intended to quiet the criticism and tension stirred up by some traditionalists. It was put together rapidly in a small meeting that has no authority to make policy or amend the 28 Fundamental Beliefs. It evidently did not involve any advance study by the denomination’s Bible scholars.

Nonetheless, veteran denominational leaders have told Adventist Today that the statement does raise several key questions because it was not discussed at Spring Meeting and there is no committee work on record. (1) Does this mean that if a group of pastors in a city or region or nation hold meetings that focus on some basic Christian theme instead of traditional interpretations of prophecy they are to be condemned or questioned? (2) Is this statement intended as an Adventist Creed? Or, does it open a slippery slope toward a creedal type of Adventist faith?

The full text of the statement as distributed by ANN follows:

To honor and exalt Jesus is the foundational commitment of the Seventh-day Adventist Church and undergirds its prophetic message expressed in the 28 Fundamental Beliefs. Salvation by Faith alone leading to a life of discipleship to Jesus is the goal of our mission. As we proclaim the three angels’ messages let us make sure that Christ stands at the center of all our activities and initiatives.

A number of entities both inside and outside the church organization have been founded for the purpose of exalting the name of Jesus. Such an honorable task also brings the challenge of proclaiming a Christ in harmony with His Word. It is our conviction that the Jesus whom Seventh-day Adventists are to follow and emulate is the One revealed in the Bible—the One who presented Himself as the Truth and upheld the authority of the Scriptures. It is of utmost importance that we never forget that Jesus identified Himself with “the way and the truth and the life” (John 14:6). He is actually the Word (John 1:1).

Church leaders are often asked for advice on how to relate with some initiatives and organizations, some of which are well established and widely accepted, such as ASI-recognized entities, which have long cooperated with the church and its leadership. A more recent development is the One Project (now apparently transitioning to become the Global Resource Collective), about which some questions have been raised. Therefore, the General Conference executive leadership with Division presidents has decided to offer some guidance regarding the evaluation of any initiative seeking church endorsement.

We commend those who, prior to joining any initiative or movement, study for themselves to assess whether such movements are in accordance with the revealed will of God (Acts 17:11). As Jesus Himself advised us: “You will know them by their fruits” (Matt 7:16). He also gave the warning, “Not everyone who says to Me, ‘Lord, Lord,’ shall enter the kingdom of heaven, but he who does the will of My Father in heaven” (Matt 7:21).

In harmony with the conviction expressed above that the name of Jesus must be uplifted in ways consistent with His propositional revelation in Scripture, we invite our church leaders and any concerned individuals to assess the biblical foundations of any ministry or evangelistic initiative in the light of Isaiah 8:20: “To the law and to the testimony! If they do not speak according to this word, it is because there is no light in them.”

The Church will be eager to work with all who share its prophetic message expressed in the 28 Fundamental Beliefs. In light of issues that have been raised regarding some recent initiatives, the following questions although not exhaustive provide some guidance for an assessment of such groups. We appeal to all organizations and initiatives that are united with us in mission to reaffirm or to respond positively in their official communication channels to the following crucial questions:

1. What does it mean to accept Jesus Christ? When we say we accept Christ is this a mystical Christ of experience only, or, does it mean an acceptance of the doctrinal truths He taught, or, both? Does such ministry or initiative uphold the substitutionary atonement of Jesus?

2. How do they understand the role of doctrine in Christian faith? Is there an organic connection between the person of Christ and the teachings or doctrines of Christ? Is there the understanding that knowing Christ necessarily includes knowing and living His teachings and the Biblical truths He taught?

4. Do they have a clear understanding of the uniqueness of the Seventh-day Adventist movement? Are they clear in how Adventist faith differs from other evangelical denominations that exalt Jesus?

5. What is their understanding of creation? Do those involved in new ministries and initiatives believe that God created this world in six literal days and rested on the seventh day in the recent past as understood and voted in our 28 Fundamental Beliefs?

6. What is their understanding of biblical authority and prophetic interpretation? Do they accept the historicist explanation of Bible prophecy and do they share the Adventist understanding of the little horn of Daniel 7, the beast powers of Revelation 13 and the antichrist of Scripture, and that faithfulness to Christ will ultimately climax in a conflict over the law of God with the Sabbath at the center of that final controversy?

7. Due to current perceptions of gender and sexuality, which contradict the biblical teaching on marriage and the family as accepted by the Seventh-day Adventist Church, these pertinent questions must also be asked: How do they understand gender identity and the question of LGBTQ+ relationships to church membership in the light of Scripture? Do they have a clear, unambiguous and biblical understanding of this subject?

Organizations, groups, or individuals that cannot affirm the 28 Fundamental Beliefs of the Seventh-day Adventist Church and provide clear and unambiguous answers to the questions above should not expect endorsement from the organizations of the Church. The General Conference executive leadership with Division presidents invites every member and entity of the church to uphold the name of Jesus by presenting him to the world and living according to His will. In doing so, Jesus must be proclaimed in connection with the truth as revealed in Scripture and understood by Seventh-day Adventists. Consequently, we reaffirm our utmost commitment, which is to preach “Jesus Christ and Him crucified” (1 Cor 2:2).