I got into Metro Baltimore Monday night. After dinner at Maggiano’s with my long-time friend David Neff, I got back onto US 29 toward my hotel in Silver Spring. I passed under the Cherry Hill Road overpass and there it was on my right: our own modest Vatican, “Seventh-day Adventist World Headquarters” glowing across the side. I wondered how many people driving by notice it, and what it means to them if they do. Ours is a practical Yankee name, like “Extra-Long-Tined Purple-Painted Wood-Handled Garden Fork Company.” I think I know what people think of when they see “Church of Jesus Christ of Latter-day Saints” (or their Disneyland castle so prominent as you drive along the Capitol Outerbelt): the Mormons have, for all their strangeness, a dramatic history, not to mention enviable name recognition. I’d be interested to know what that “Seventh-day Adventist World Headquarters” sign says to motorists. If not inspiring, does it at least make them curious?

The Seventh-day Adventist World Headquarters takes security seriously. You need either a recognizable face, or a badge, to get in. My face doesn’t get me in many places, and this morning it didn’t work here, either. But I did have a press badge waiting for me, and with that I took my place at the press table, Bonnie Dwyer on one side, Kenrie Hylton on the other.

A note about this Spring Meeting. This is one of the two times when the executive committee of the General Conference meets. The largest meeting is in the autumn, for which union presidents from all around the world are brought in. (The 2017 Autumn Meeting is going to be a consequential one, because it marks the end of the one-year unity process that the GC brethren kicked off in 2016. Mark your calendars.) It may surprise you, knowing that we describe ourselves as having a democratic church model, to learn that it only takes 40 members of this committee of around 330 to make a quorum, 15 if the business is considered routine. 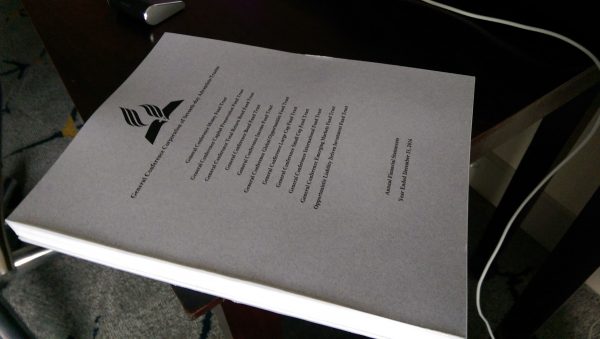 The Spring Meeting, I learned, is mostly about finances. The main document is a catalog of financial printouts an inch
thick. As uninterested as I am in finances, I suspect there are fairly few in the room who had much more interest in this dense tom than I did. I didn’t see anyone studying this book. I didn’t see anyone open it. We all assumed that those who elucidated the main points told us what we really need to know.

The financial doom and gloom of last year had become less doomy and gloomy this year. The GC had spent a little less money. They cut their travel expenses by a third of what it was the year before. A $20 million deficit in the Operating Fund in 2015 turned into a $1 million gain in 2016. Treasurer Juan Prestol explained that the markets didn’t fall as some had feared after the election—Donald Trump’s contribution to Seventh-day Adventists’ ministry and mission—and the problem with currency conversion hasn’t gotten any worse. (A strong dollar is the GC’s enemy, because so much income arrives in Brazilian reals or Mexican pesos.)

But he also informed us that for the next four years they’re anticipating NAD tithe will continue to decline. Since the NAD has long been the church’s financial generator, that’s going to affect everything the GC can do. But probably not until it affects all the rest of us.

I’m attaching here a paper about tithe accountability, which will tell you a bit about how tithe is used. I confess I didn’t get much out of it, but it looked important.

One always ends up with boxes of stuff to take home from these meetings. Pens, water bottles, mugs, and at least a stone-weight of paper. I’m especially interested in newly-created missionary materials. After I see them at the meetings, I watch for them all year. Like if you raised pheasant chicks and released them, you’d keep an eye open to see  them thriving in the wild. I have yet to see something that’s presented here as the latest and greatest (with one exception—the Adventist Learning Community) show up outside the building. There’s a sort of “If we make it, that’s enough” thing that goes on here, no matter how often that hasn’t worked. Not much escapes the General Conference’s gravitational pull, even the stuff that is designed to.

As you’d expect, we do as lot of praying here. Sometimes it seems appropriate, but other times it is merely punctuation. Prayers to open meetings, end meetings, or just mark one section from another. Someone should, some time, take a close look at the matter of using prayers to organize and control.

Most GC officers are elected at General Conference session every five years. But one of the tasks at both the spring and autumn meeting is filling in offices whose occupants have left at some time in between. There wasn’t much of interest here, though there was one discussion that I thought told a lot about us. A new GC youth director, Gary Blanchard, was proposed. Right away there was note of apology from the chair about how young he was (not specified, but he has young adult children, who were home-schooled—a detail that bothered me) and that he’d only been a conference youth director, never in a division or even a union office! Elder Wilson mentioned this several times, saying that it’s going to take some time for him to fit into our system.

My reaction was to wonder whether fitting into “our system” at this level is an especially desireable goal. To work in this building, it seems you have to be the kind of person who is already working in this building. The GC is a gerontocracy. Mark Finley is still around in his 70s, and I saw several others that I am certain are at about the same point. There are younger people in the building, but those occupying the top spots aren’t young. Congratulations to Gary, and possibly condolences.

Speaking of Mark Finley, he led a rather long discussion on the opportunities of small group evangelism, citing Testimonies 7, p. 21-22. I do respect Mark, but I noted while there was much enthusiasm on stage, I detected none in the room. I overheard a guy sitting near to me say that small group evangelism has pretty much collapsed everywhere except in Latin America, and it’s not even clear how well it’s working there.

The GC communications department made a presentation about unifying design visually for our products. The main two proposals: moving to a sans-serif font for the church name (because it can be unified over many more languages than our typical Times Roman), and a page/product design using seven vertical bars, with the one on the right (symbolizing the Sabbath, according to the director) containing the church logo.  You can read more about it here.

I noted that no one from the floor had said anything during the discussion of small group evangelism, but many had an opinion on logos and design. I guess in the age of computers we’ve all become design experts.

The last item of the day was the Biblical Research Institute’s “Statement on Transgenderism. I’ll write more about it later, but for right now let me just note a couple of things.

First, its conclusion won’t surprise you. After all the study is done, the BRI believes people would do best to accept the gender that their plumbing says they are—or at least don’t act out your gender dysphoria in any way that would make the rest of us uncomfortable.

But my other observation is that the paper was presented with remarkable sensitivity. Far from writing these individuals off as we would have a decade or two back, it was apparent to me that many in this room had grown into a more sympathetic appreciation of how difficult is the lot of transgender people, especially if they want to be Seventh-day Adventists.

Back in 2015 I wrote that the GC statement on homosexuality was a progressive document for us Seventh-day Adventists. I got a lot of pushback from friends who said, “Yeah, but it still doesn’t fully accept gay people.” No, it didn’t. But just remember where we came from. This is a denomination that had until a decade or two ago been supporting crackpot programs (sometimes abusive) to change gay people into straight people. Back then we sometimes acted like gay people were pedophiles, even kept them out of our worship services. The statement wasn’t what it could have been, and came too late to save very many gay people for the church, but it seemed to me a step toward open-mindedness that I wanted to make note of.

And here, too. The paper, and nearly every comment that followed it, was sensitive and sympathetic. One can question the dependence on the word “transgenderism”, it being sometimes used snidely by anti-gay evangelicals, but here I heard no snide remarks, and from most people a rather astonishing pastoral sensitivity. The BRI scholars had studied the topic with some care, I thought. They admitted that the Bible didn’t really address the issues of gender dysphoria as we understand them today, and seemed genuinely sympathetic to the difficulties that transgender people face.

The pastoral prize goes to retired GC Health Ministries director Dr. Allan Handysides. Have you ever had to tell parents that you’re not sure what sex their newborn is? he asked the room. Have you ever had your child come to you and tell you that he’s not sure he’s a boy? Or that he loves other boys? Can you imagine how that feels? The majority of us are looking at these things from the outside, he said, not really understanding how difficult and painful this is for people, and until we do, there’s a lot that we’re missing.

(I often tell church members when they’re blustering about “all those gays out there,” “Just wait until it’s your son, your granddaughter. It looks entirely different then.”)

There is plenty to criticize about the BRI “Statement on Transgenderism” (which you can download here), but just remember where we used to be. We used to be unable to talk about this stuff at all. We used to reject people like this without a second thought. Give the BRI, and the GC committee that accepted their report, a little credit for trying to be thoughtful about the matter, for recognizing the difference between gender dysphoria and acting upon it, and (both in this statement and the earlier one on homosexuality) stating unequivocally that they want transgender people and gay people to be part of the church, as long as they can live by our beliefs.

I’ve been around our bunch long enough to know that this is progress. Too little too late, perhaps, but progress nonetheless. I’d be very surprised if you’d get this level of understanding and thoughtfulness from a lot of gatherings of fundamentalists. We Adventists may, given enough time, actually find ourselves acting like Christians to gay and transgender people.

Loren Seibold is the Executive Editor of Adventist ‘Today.