Revelation, the Quarterly and Present Truth 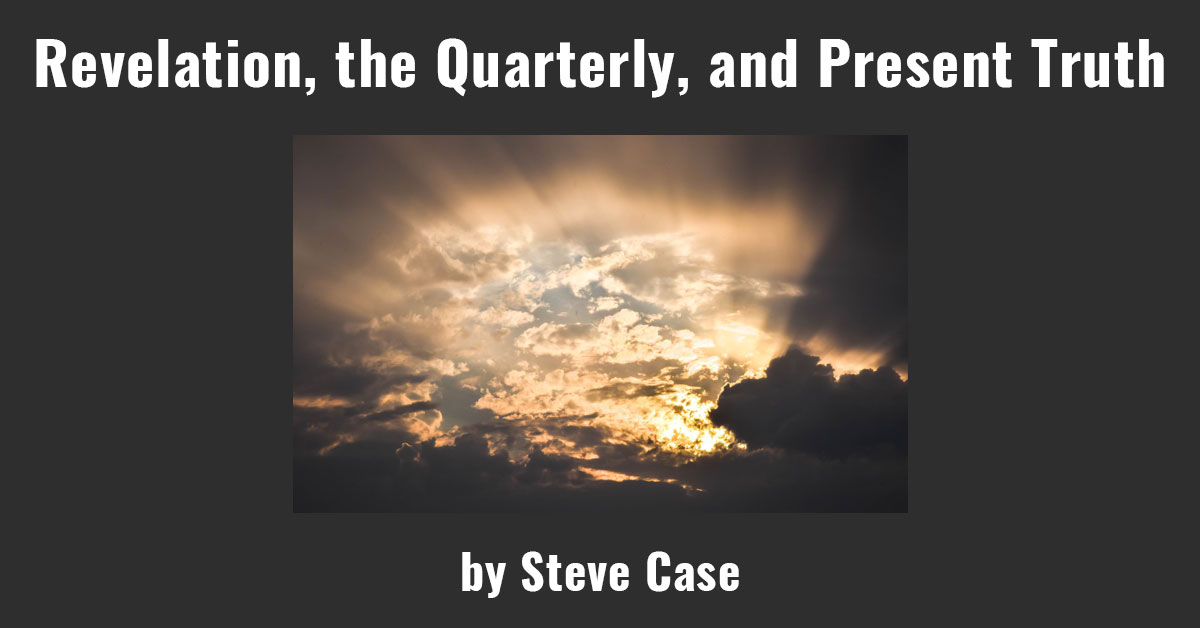 Seventh-day Adventists face a conundrum. Our pioneers emphasized “Present Truth”[1] when we officially became a church in the second half of the 19th century. Present Truth meant truth pertinent to right now—a front-burner topic or issue. How long does Present Truth continue on the front-burner? Moving truth to a back-burner doesn’t remove its truthfulness; simply its emphasis and urgency.

For the early Church, Christ’s return had been Present Truth for the apostles. But was it still Present Truth 60+ years after Christ’s ascension? All the apostles were dead (except for prisoner John on Patmos), Rome’s persecution of Christians increased, and existing churches seemed to flounder. Frankly, it looked like Christianity could end. Where in the world was this Jesus who supposedly promised to return? What was Present Truth in A.D. 95?

When John received “the revelation of Jesus Christ” on Patmos, perhaps the most startling initial message came early in the book: Jesus was walking among the churches! In response to the question, “Where in the world is Jesus?” the answer was: Right beside you! And then John received a specific message for each church. The rest of Revelation includes additional symbolic messages applicable to John’s day. They also apply to 19th-century America. And they apply to the world today.

This raises questions, such as:

Based on these descriptions, are you a Former Adventist or a Current Adventist? This is our Adventist conundrum. One indicator could be your understanding and use of the book of Revelation—the topic for next quarter’s adult Sabbath School lessons. As the early Christians heard someone read Revelation’s description of a blasphemous and oppressive sea beast symbolized as Babylon, their Present Truth understood it to be Rome, not literal Babylon. For Adventists in the 1880s United States, symbolic Babylon was the Catholic Church. For the 20 million Adventists worldwide at the close of 2018, what would be Present Truth for identifying blasphemous and oppressive Babylon?

Because the entire world has become a global neighborhood, we should stop thinking of the United States as the world.[3] For Adventists, less than five percent of our members reside in the US. You’ll find more Adventists in primarily Hindu India than in the U.S. The same is true of the number of Adventists in Zambia where Protestants comprise about three-fourths of the population.[4] Consider the tsunami survivors in Muslim-dominated Indonesia this past week. Would Present Truth for them be that when the United States forms a union with the Catholic Church by passing a Sunday law in the U.S., Indonesia will face a time of trouble worse than any they’ve ever experienced?[5]

Another example is that Former Adventists maintain it is blasphemous for Roman Catholics to claim the pope speaks as the voice of God on earth when he speaks ex cathedra. This Catholic doctrine originated in 1870, which matches the Present Truth time period for Former Adventists. But Current Adventists are more alarmed and consider it blasphemous when our own church administration selectively misquotes Ellen White to promote the notion that when the General Conference meets in session, it is the highest authority God has on earth.[6] And with the threat of oppression for those non-compliant with a few selected policies (policies, not doctrines!), some wonder if our own General Conference leadership now mirrors practices we have criticized in Roman Catholic Church leadership.[7]

What does this have to do the next adult Sabbath School quarterly? If you’re a Former Adventist, you’re likely to appreciate this quarterly as an affirmation of Present Truth from the 1880s in the United States; not so if you’re a Current Adventist.

Turn your eyes upon Jesus
Look full in His wonderful face
And the things of earth will grow strangely dim
In the light of His glory and grace.[11]

[2] I’ve chosen the term “Former Adventist” to give a time frame reference, not to be pejorative or to suggest that someone with this outlook on Present Truth isn’t an Adventist; simply one whose Present Truth fits a time period previous to now.

[3] Perhaps making American Adventism prominent at the expense of the majority of Adventists throughout the world is the church’s version of the nationalistic slogan “MAGA—Make America Great Again.” Or maybe it’s just blind ethnocentrism, tradition, or considering something to be Present Truth that is no longer present or true.

[4] More than 5,500 people were baptized in Lusaka, Zambia June 23 of this year, nearly double the number of baptisms when the Holy Spirit was poured out on the Day of Pentecost (Acts 2:41).

[5] Fortunately ADRA’s disaster relief branch of ministry is on the ground in Indonesia responding to multiple tsunamis rather than evangelists preaching the message of Former Adventists.

[6] Has this been extended to the GC’s Annual Council or any decision made by any group of GC leaders?

[7] Retired Adventist Church historian George Knight has exposed this recently in a September 21, 2018, article for Spectrum available online at https://spectrummagazine.org/views/2018/adventist-fbi-and-sticky-wicket-thicket; see also Adventist Authority Wars, Ordination, and the Roman Catholic Temptation, and a YouTube post at https://www.youtube.com/watch?v=Wu_AgbQkioE. In addition, see retired Adventist Review editor William Johnsson’s books Where are We Headed: Adventism After San Antonio, and Authentic Adventism. Johnsson even called for censure of the GC officers, reported in Adventist Today at https://atoday.org/gc-officers-who-brought-compliance-proposal-to-annual-council-should-be-censured/.

[8] Current Revelation scholars such as Jon Paulien, Ranko Stefanovic, Jacques Doukhan, Sigve Tonstad, and Kendra Haloviak-Valentine have built on the shoulders of their Adventist predecessors such as Hans LaRondelle, Mervyn Maxwell, and Kenneth Strand.

[9] A failure to consider what current Seventh-day Adventist Bible scholars have discovered and shared would be as unfortunate as investing large amounts of time, money, and human resources for a Theology of Ordination Study Committee and then not using its work if it didn’t support your predetermined conclusion on the matter. Jeremiah 42-43 gives a similarly profound hard-headed and hard-heartedness in Bible times.

[10] Read about changes made to Stefanovic’s originally approved quarterly as reported in Adventist Today October 10, 2018, and at https://atoday.org/late-changes-to-sabbath-school-lessons-emphasize-pope-minimize-trinity/ and then Stefanovic’s response to the changes as reported in Adventist Today October 17, 2018, at https://atoday.org/dr-ranko-stefanovic-on-the-revelation-sabbath-school-quarterly/. One must now read between the lines to glean Stefanovic’s gems. The majority of the quarterly now is a reaffirmation of 1880s Present Truth sandwiched by quotations from the inspired 19th-century prophet Ellen White.

[11] The lyrics to the chorus of the popular Christian hymn “Turn Your Eyes Upon Jesus” (also called “The Heavenly Vision”) were written by Helen Howarth Lemmel in 1922. I consider it to be Present Truth for both Former Adventists and Current Adventists.

Steve Case, president of Involve Youth, has also been conducting Revelation seminars throughout North America and creating Revelation resources since 2010.