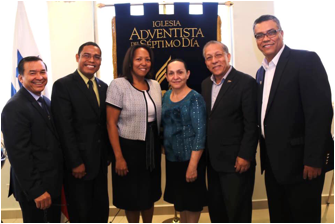 From APD, June 23, 2016:    On Monday the first woman was approved as a Seventh-day Adventist pastor in the Central American nation of Panama by vote of the governing body of the Panama Union Mission. Pastor Shesell Busby leads four local churches in the Los Andes area of Panama City.

“Welcome Pastor Busby!” said an announcement from the union mission leaders on its Facebook page. “We are pleased to be the first church leaders in Central America … to have opened the door.”

Busby completed her education in pastoral ministry at the Adventist Theological Seminary in Cuba. She has been issued credentials as a Licensed Minister which means she can conduct baptisms, communion services, weddings and funerals in the congregations that she has been assigned.

Panama is part of the denomination’s Inter-American Division where Adventist leaders have indicated an openness to women serving as clergy. Several women have been hired as commissioned ministers in charge of various departments in the division office in Miami and Spectrum, the journal of the leading association of Adventist academics, has quoted supportive comments by a division officer. None of the women working as ministers in the division have been ordained to avoid conflict with views of the majority of the delegates at the General Conference Session last summer.

There are about 100,000 Adventists in Panama in more than 400 congregations among a population of about 4 million. The denomination operates five secondary schools and two radio stations in the country.

APD is the news service for the Adventist faith in Europe. This story was translated from German. The featured photo with this story is Pastor Busby with denominational leaders in Panama.