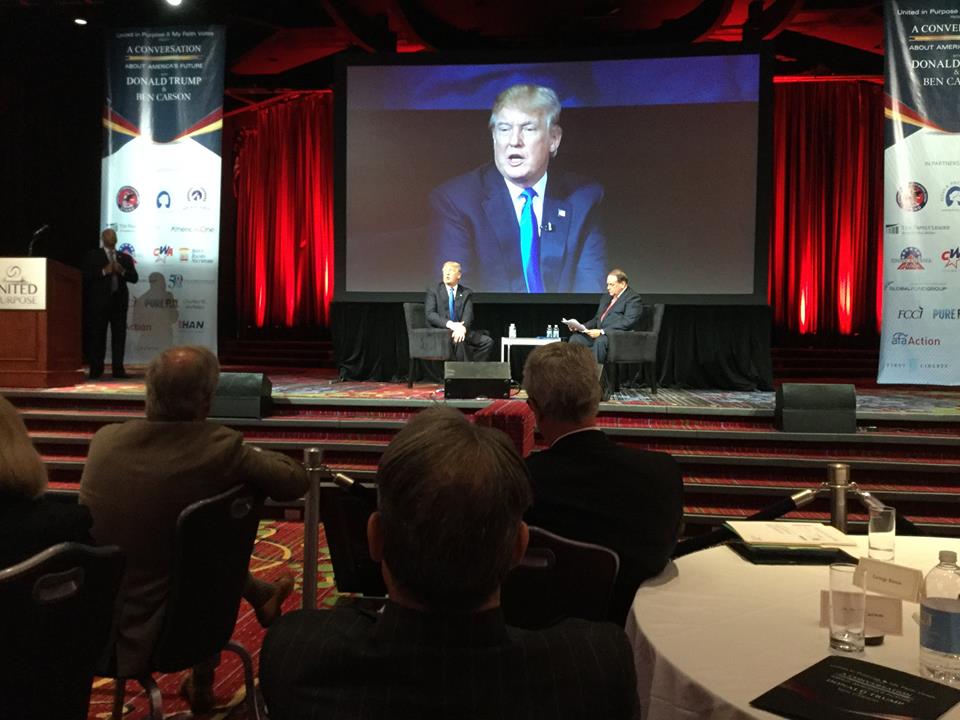 June 23, 2016:    Pastor Doug Batchelor was an invited guest among the 1,000 religious leaders who met with Donald Trump on Tuesday in New York City. Batchelor is a pastor in Sacramento (California) and leads the Amazing Facts television ministry affiliated with the denomination’s Northern California Conference. Trump is the presumptive nominee of the Republican Party for president of the United States.

So far as Adventist Today could determine, Batchelor was the only Adventist clergy in the group, but Dr. Ben Carson, a well-known Adventist church member and retired surgeon, introduced Trump near the beginning of the day-long private meeting. Carson ran against Trump starting last year until it became clear earlier this year that he was not winning enough support in the primary elections to be a viable candidate.

Evangelical Christians are a key group for any conservative candidate for elective office in the U.S. and the main purpose of the meeting was to seek the support of many Evangelical leaders who voted for candidates other than Trump in the recent primary elections. Mike Huckabee, a Baptist clergyman who has been an elected state governor and a candidate for president, chaired a morning session in which selected participants asked pre-screened questions of Trump.

Key questions covered topics such as abortion and the Supreme Court, religious liberty and immigration. Most of the Evangelical religious leaders have as a majority priority the appointment of Supreme Court judges who will reverse a decision from decades ago that protects the right of a woman to have an abortion. Many have spoken out in favor of outlawing abortion in the U.S. Trump has taken the same position in recent months although for a number of years he was supportive of abortion rights.

Evangelical leaders are generally critical of what they call “politically correct” language that is respectful of women and minorities, including lesbian, gay, bisexual and trans-gender (LGBT) individuals. Carson has sneered at being “politically correct” in some of his public comments, but Trump has made a number of the most offensive comments about immigrants from Mexico, women, journalists and people with disabilities.

Trump’s personal life has not been very conservative or Christian during much of his life. He has been divorced and remarried, owns gambling establishments, operates a major beauty pageant and markets alcoholic beverages. He has made rude remarks about the religious faith of others, including a comment about Carson’s Adventist faith. He has said that he is a Presbyterian, but it is unclear which Presbyterian denomination he is affiliated with.

Carson has endorsed Trump and even been mentioned by some as a possible vice presidential running mate. Some other Christian leaders have also endorsed Trump, but many told journalists as they left the meeting on Tuesday that they were not yet ready to do so. This included Dr. James Dobson, the noted family life expert. Others were even more negative about Trump and refused to attend, including Russell Moore, chairman of the Southern Baptist Ethics and Religious Liberty Commission; Max Lucado, the Texas pastor and best-selling author; and Bible scholar Denny Burk who has labeled Trump “a Mussolini-in-waiting.”

Batchelor made it clear on his Facebook page that his attendance “was not an endorsement.” He said of Trump’s answers to the questions asked by the group, “Some answers were good, others were pretty vague.”

“I must say he’s a whole different person when he is sitting down in a conversational style,” Batchelor continued, speaking of Trump. “At a rally he’s swaggering and bombastic, today he seemed pensive and humble. … Now we will wait and see if they arrange a similar interview with Hillary [Clinton],” the presumptive nominee of the Democratic Party and former U.S. Secretary of State, Senator and First Lady.