Reviewed by Andy Hanson, January 27, 2015:    The movie cost one hundred and forty million to make. That’s not surprising when one considers the props and costumes and special effects. Unfortunately, it’s not a very good movie. Not only has it been panned by Christian audiences; it’s been banned in Egypt as historically inaccurate and insulting. The skin tones of the leading characters are lighter than one would reasonably expect, and God is a boy.

If you haven’t seen the movie, I know of no better critical review than Rebecca Cusey’s. (1) My edited version of her review follows. She begins with a quote from C.S. Lewis.

“The ancient man approached God (or even the gods) as the accused person approaches his judge. For the modern man, the roles are quite reversed. He is the judge: God is in the dock.”—C.S. Lewis (2)

Director Ridley Scott acts as lead prosecutor in “Exodus: Gods and Kings,” putting God on trial using one of the Bible’s most famous stories. The accused stands charged with capriciousness, meanness, petty jealousy, and simply being an all-around jerk.

The film follows only the bare outlines of the Biblical story…Moses (Christian Bale) believes himself the Egyptian cousin to the future Pharaoh Ramses (Joel Edgerton). When Ramses ascends to the throne, he drives Moses away. Turns out, Moses is not Egyptian at all, but was adopted by a princess, and is truly the son of a lowly Hebrew slave. 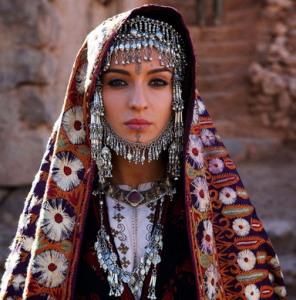 Fleeing into the wilderness, Moses meets a local girl (Maria Valverde), marries, and settles into a life of sheepherding. But one day—wouldn’t you know?—he gets knocked on the head. He sees first a burning bush, then a small, angry boy (3) who chides him about his lack of concern for his suffering people. Moses is to return to Egypt and free his people, by force if necessary. Tellingly, Moses carries a sword, never a staff.

Moses grudgingly obeys this petulant deity. He confronts his would-be cousin Ramses, but there’s a much more sinister force at work. Soon plagues start afflicting the people of Egypt, down to the precious son in Ramses’ castle… 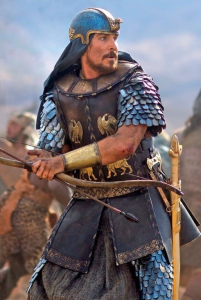 The film changes the tone and ideas of the story. The central conflict is not between Moses and Ramses, but between little-boy-God and Moses. They yell at each other, they snipe, they call each other nasty names and accuse each other of being heartless, uncaring meanies. The only thing they never do is listen to each other. At the end, as Moses chips painstakingly at some stone tablets, little-boy-God wonders that Moses “doesn’t agree with” Him, but sticks around. Moses concedes that he “doesn’t agree with” little-boy-God, but at least they’re still talking.

For me, the impact of the film had to do with visualizing the gruesome and terrifying plagues, particularly the deaths of the Egyptian first-borns. It’s one thing to read about the Nile running in blood and another to watch the viscous gory flow and see dead children in the arms of their parents. 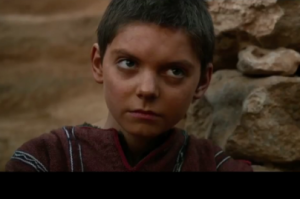 I found myself sympathizing with the early Gnostic Christians who contrasted the god of the Old Testament with the Good News of the New.

Marcion, a Christian from Asia Minor, was struck by what he saw as the contrast between the creator-God of the Old Testament, who demands justice and punishes every violation of his law, and the Father whom Jesus proclaims—the New Testament God of forgiveness and love. Why, he asked, would a God who is ‘almighty’—all powerful—create a world that includes suffering, pain, disease—even mosquitoes and scorpions? Marcion concluded that these must be two different Gods. (4)

I’ve included photos of Moses, his wife, Malek, and a scene from the parting of the Red Sea.

2. C.S. Lewis, God in the Dock: Essays on Theology and Ethics

3. Director Ridley Scott cast 11-year-old British actor Isaac Andrews to play the role of Malak in the film. In Scott’s interpretation of the story, Moses meets Malak in front of a burning bush and it becomes apparent to Moses that God is speaking through Malak.

4. Elaine Pagels, The Gnostic Gospels, p. 28, from the chapter “One God, One Bishop”: The Politics Of Monotheism.

The Inspired Expired-1 Youth Set Sails for the Kingdom