What to Do with a Deceased Prophetess? Part 1 of a three part series  by Jack Hoehn, January 27, 2015:     The world fraternal twins Elizabeth and Ellen Harmon were born into on November 26, 1827, was more like a third world country than the USA of today, according to Daniel Walker Howe[1] in the Oxford History of the United States—1815-1848—What Hath God Wrought.

“Life in America…was dirty, smelly, laborious, and uncomfortable.  People spent most of the waking hours working with scant opportunity for the development of individual talents and interests unrelated to farming.  Cobbler-made shoes being expensive and uncomfortable, country people of ordinary means went barefoot much of the time.”  “People owned few changes of clothes and stank of sweat.  Only the most fastidious bathed as often as once a week. . . . [A]s late as 1832, a New England country doctor complained that four out of five of his patients did not bathe from one year to the next.” [2]

“The man was the ‘head of the house,’ by both law and custom, and he could exploit the labor of other family members as his predecessors had done for centuries…”  Men had legal control over the property and labor of their wives and children.  “Children could perform many of the necessary errands and tasks:  fetching water from the well, feeding chickens, collecting firewood.  Foresight, not irresponsibility, prompted farm couples to have many children.”[3]

Slaves were the Key

“In 1815, of about 8.4 million people in the United States, almost 1.4 million were held in hereditary slavery, the personal property of their owners…. Public opinion…generally held the institution a regrettable evil, contrary to both Christianity and natural rights.  However…nowhere were whites willing to be taxed to pay compensation to owners for freeing their slaves.”  Paternalism would lead an owner of slaves to admonish his overseer “not to overwork “a breeding woman” but to remember that her healthy baby was worth more money than her extra labor would represent…”[4]

Americans ate wheat, beef, and potatoes in the North, and corn, pork, and sweet potatoes in the South.  Fruit appeared only in season.  Milk, cheese, and butter were plentiful, but there was no refrigeration and bacteria had not been discovered and pasteurization not invented till 1864.  As Howe writes, the diet was “monotonous and constipating, too high in fat and salt.”[5]  It may surprise you to know that the consumption of alcohol was much higher in 1825 than it is in 2015!   “In 1825 the average American over 15 years of age consumed seven gallons of alcohol a year, mostly in the form of whiskey and hard cider.”  (Today that’s down to less than two gallons, mostly from beer and wine.)  “All social classes drank heavily; college students, journeyman printers, agricultural laborers and canal-diggers were especially notorious.  School children might face an inebriated teacher in the classroom.”[6]

“Indoor light was scarce and precious; families made their own candles, smelly and smoky, from animal tallow.  A single fireplace provided all the cooking and heating for a common household.  During winter everybody slept in the room with the fire, several in each bed.  Privacy for married couples was a luxury.”[7]

Perhaps the lack of privacy was a blessing in disguise for American wives, because “women bore children in agony and danger, making their life expectancy…shorter than that of men.  Once born, children often succumbed to diseases like diphtheria, scarlet fever, and whooping cough.  One third of white children and over half of black children died before reaching adulthood.”   “Doctors were in short supply, hospitals almost unknown.  This proved a blessing in disguise, for physicians then did as much harm as good, and hospital incubated infection.”[8]

Ellen married James Springer White when she was 17 years of age.  Her first son Henry was born ten months and 29 days after her marriage.  He died of pneumonia at age 16.  Her second son Edson was born when she was 21.  Her third son William was born when she was 26.  Both survived childhood.  But her fourth son Herbert was born when she was 31 and died before his third month.  James White died after multiple strokes when Ellen was 53.  A fellow minister about 6 years her junior, Stephen N. Haskell proposed marriage to Ellen when she was 67 after his first wife died.  (Ellen declined and suggested someone else for Elder Haskell, but still had Stephen’s picture in her bedroom when she died!)

“Communication in the early nineteenth-century America usually required the transportation of a physical object from one place to another—such as a letter, a newspaper, or even a message attached to the leg of a homing pigeon.”  It took 50 days to get news from Liverpool to New York City, another day to get to Philadelphia, 2 days to get to Boston, 2-5 days to get to Washington, DC, and 10 days or more to Charleston.[9]  In fact, the last battle of the War of 1812 with Great Britain was won by General Andrew Jackson two weeks after the Treaty of Ghent had been signed in Europe on December 24, 1814, formally ending the war!  But because of the harsh winter of 1814-15 the American president in Washington, DC, didn’t know of Jackson’s victory at New Orleans until four weeks later the news was brought by the fastest horsemen, arriving on February 4.  Then the news that the war was already over since Christmas Eve didn’t arrive from Europe till February 13!

By the time Sister White (the name by which most Adventists knew her) died at 87 years of age from a fall that fractured her left hip and kept her in bed for the last five months of her life, the third world status of the United States (at the time of her birth more like rural Africa today) was rapidly changing.

Although Ellen Harmon may not have known it, this change began in 1844, not on October 22, but on May 24, when Professor Samuel F. B. Morse “seated amidst a hushed gathering of distinguished national leaders in the chambers of the United States Supreme Court in Washington, tapped out a message on a device of cogs and coiled wires:  WHAT HATH GOD WROUGHT.  Forty miles away in Baltimore, Morse’s associate Alfred Vail received the electric signals and sent the message back.  The invention they had demonstrated was destined to change the world.”[10]

Not only were there now telegraph offices everywhere in the USA, but many cities had electricity, railroads went everywhere, and automobiles were being made at Henry Ford’s factory in Detroit.  Airplanes were flying, Hollywood was making silent films, and early submarines were preparing for World War 1.  Ellen’s broken hip was X-rayed at the Adventist Sanitarium in Napa Valley.  The Panama Canal was completed, milk could be pasteurized, professional baseball had Babe Ruth, slavery had been abolished, and they even allowed women as well as men to vote in the new states of first Washington, then California, Oregon, Kansas, Arizona and Illinois!

Guttenberg, centuries ago with moveable type, had made books available in the world Ellen White was born into, but the moveable type process was slow and laborious and many families only owned one book, usually a Bible.  By the time of her death the Cylinder Press had been introduced in the USA.  Paper made, not from old cloth but from cheaper and more available wood pulp, could now be produced not sheet by sheet, but by huge rolls (1860).  Rotary printing, offset printing, and hot metal typesetting had made it possible for her books and magazines to proliferate “like the leaves of autumn.”

In the Bibles present in most USA homes in the nineteenth century the inspired prophet Jude left us one little book with 25 verses and 605 translated English words.  The world Adventist church recently studied the writings of the inspired half-brother of Jesus in their Sabbath Schools.  James has a few paragraphs recorded in Acts, and again a single book of 5 chapters and 2,304 words. The inspired doctor Luke left us 2 books of 52 chapters and 49,869 English words.  And the 5 books of inspired Moses have a total of 127,840 words. 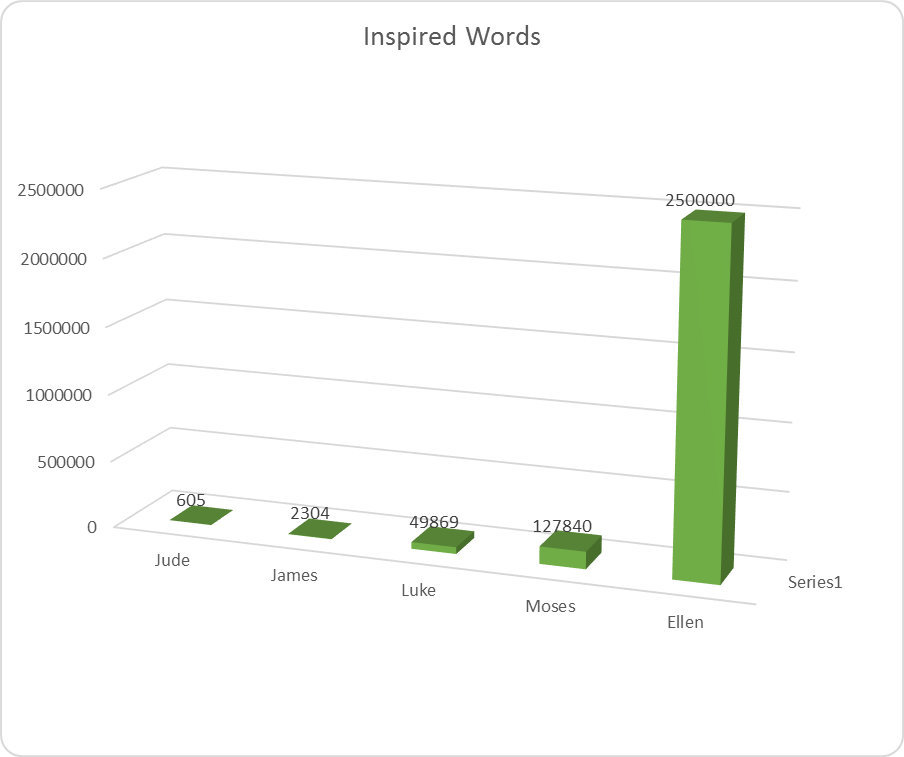 Our inspired prophetess, Ellen White, on the other hand has left us 100 books, 5,000 periodical articles, and a total of two million and five hundred thousand (or so) words.  What are we to do with someone from a very different world than our own, who left us with such a prodigious output?  How can we put Ellen on a level footing with other inspired writers such as Moses, Luke, James, and Jude?

What do we do with the writings of the Inspired Expired?

[To be continued.  This is Part 1 of a three part series on The Expired Inspired. If you found this article interesting, please share it on Facebook or other media with interested friends.  Because this is a series, it will be closed to reader comments until after all three articles have been published.]

Candidate Who is an Adventist Comes Close to Being Elected President of Zambia Exodus: Gods and Kings (movie review)